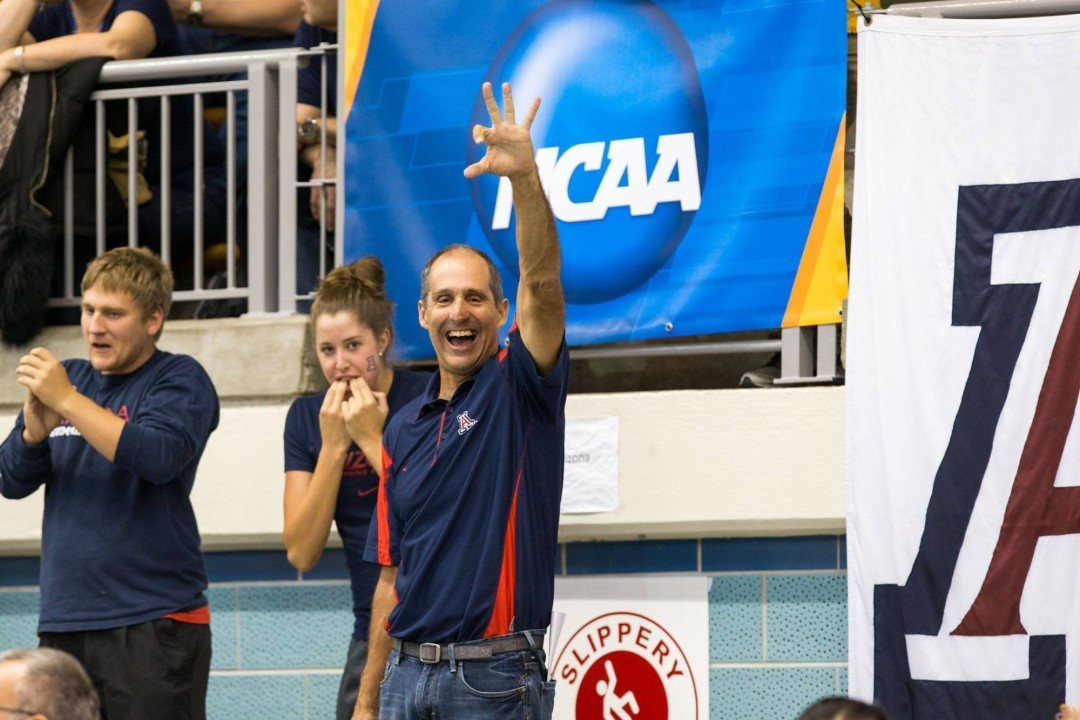 While the 800 free relay was the only event contested on night 1 of the 2016 Texas Invitational, the Arizona Wilcats stuck around at the end of the session to time trial the 200 medley relay. The women posted a lightning fast 1:34.63 for a new school record and NCAA ‘A’ cut time, courtesy of Taylor Garcia, Kennedy Lohman, Annie Ochitwa, and Katrina Konopka. That downed the previous Zona school record of 1:35.29 set back in 2008, and it was within a half second of the NCAA Record.

Their splits were as follows:

The men also time trialed the 200 medley relay, with the squad of Chatham Dobbs, William Wihanto, Chad Idensohn, and JP Beach put together a time of 1:24.39. It’s also worth noting that Blair Bish had a fast swim on the B relay, throwing down a 23.42 breaststroke leg.

The A relay splits were as follows:

He’s relatively new. I think this is his sophomore season. He’s from South Africa, so only has a year of yards under his belt so far. I think he was sub-20 at Pac-12s last season too.

Three sophomores and a freshman in that womens relay. Wow.

That Zona relay is incredible shame they still don’t have Tandy but Beach’s 19.03 is solid also. 21.05 is awesome and 19.81 fly split nuts. And 23.42 from Blair in the b, relay Zona looking good if Bish was on that a relay it would have came out to a 1:23.31 which would have been faster than what Florida went last year. Zona is starting to come back to the spotlight

Shows how little you know Chewbacca. Do you know how many NCAA champions Rick “Rocket” Demont has coached at Arizona the last 25 years?? Utter nonsense. Look it up if you don’t believe me.

Buckeyeboy I think chewbacca was referrencing their performance under demont as a head coach.

Demont has been around for decades though

These were also time trials, which I fully understand and get when it comes to qualifying for NCAAs. However when the medley relay has to be swim very fast in both prelims and finals at NCAA with someone like Bish or Dobbs (who both swam and finaled in the 100breast and 100 back respectively at NcAAs) the amount of swims stacks up and by looking at last years results it took their toll on the men’s 2 MR. Just an observation

Yeah but the 100’s of stroke are all on the same day as 200 medley so it’s not like they have a disadvantage compared to other people. Everybody on the relays will almost definitely swim 300 yards of their stroke that day (100 individually twice and relay leg twice)

I’m not 100% sure and I’m too lazy to verify, but I’m pretty sure Blair Bish was on the B relay at PAC-12 Champs last year and split stupid fast on that one. Why don’t they put him on the A 200 medley relay? If he was on the A I’m sure that relay would be at least top-3 in the country right now (again not certain but I’m not going through the trouble of looking that up)

Even without Bish the A relay is 1st in the country by .03 right now (ahead of Missouri)