Teri McKeever to Missy Franklin, “Go Make Them Remember You” 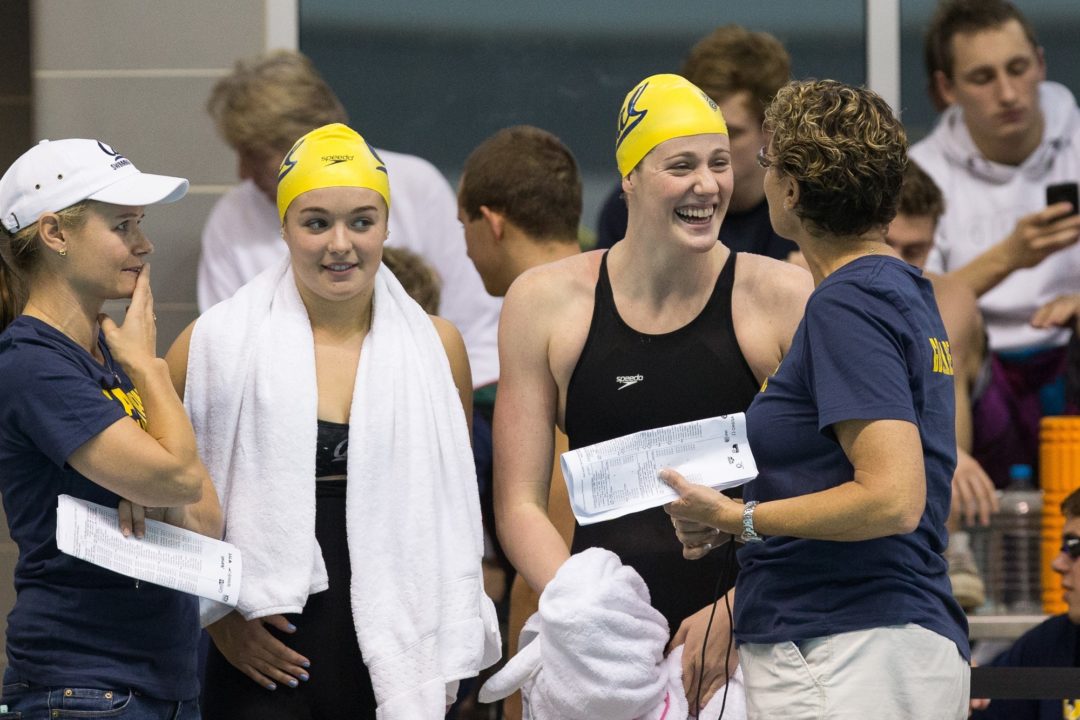 “A lot of different women stepping up in different ways, and just fighting, so I am very proud.”

“I thought she would be under but I didn’t know how far.”

“I just told her, go make them remember you.”

On the strategy going into tomorrow

“We need to get together tomorrow morning, have a little pow-wow, and make sure we are ready to fight out butts off for this last day. That’s the strategy – fight.”

“Really, really proud of Courtney; Courtney’s had a busy schedule, probably one that she didn’t necessarily anticipate, being on a couple of relays and we may in fact use her on another relay tomorrow that she may not be anticipating. Courtney’s a little disappointed, she certainly went into the season wanting to win tonight. I believe her best event is tomorrow in the 200 backstroke, so I think we are going to see something really special out of her and she’s definitely not going to stop fighting, that’s for sure.”

“I knew it would be a really tough race between us and Louisville. I know Farida and I know the rest of our team and she would put everything on the line just like the rest of us on the relay to get her hand on the wall first. I think we all just did a really great job of knowing our place on the relay, getting the job done and finishing off strong on the end.”

On competing on the national stage as a freshman

“I don’t really have words for how inspired and magical the last couple of months have been for me. I moved here two months ago from Canada and I’ve had to adjust from a short course meters format, so coming here for NCAA’s has been the most intense atmosphere out of all the meets I have been to. It has been a really good year for me with all the changes, and I just learn to embrace everything and have fun with it.”

On if the pressure was off after this morning

“I think so. I didn’t feel too much pressure. I just really wanted to have fun. So much of my family is here, and that’s just so special to have them here.”

On what there was left to improve on

“Yes, it wasn’t a perfect race which is encouraging because there is room to improve and go faster.”

“My walls. I keep wanting to hit them perfectly, and I still haven’t yet.”

“Just to stay even more relaxed and remind myself of all the training that we have done. My teammates are on the side, and it’s for them. Our goals have been to make top 10, and it’s looking like it’s a possibility.”

On the team’s mindset going into the last day

“We have shown up every morning. Our nights have not been as good as the morning, but we have to get it done in the morning and we have. Just one more and we have to stay energetic and positive.”

Did you expect to go under 22 for your relay split in the 200 medley relay?

“I was hoping, but my coach told me when I was on the podium, and I was just really excited.”

Were you guys expecting to win the race?

“We were hoping to, but second is incredible. Our relay last night that was sixth was the best ever for our school, so we were second in the country tonight, and that is something we are all so proud of.”

“I just told her, go make them remember you.”

Your life is sad.

I don’t know how we could ever organize it, but my wish-dream would be that no one responds to POL at all. No downward arrows. No comments. No attention whatsoever . . . which is, I presume, what s/he wants.

You’re right Brad. That’s the last time I reply him or her.

Why don’t u just follow soccer and criticize those hugely payed players on the soccer field .

Please try and drum it into your head:

She was injured last summer.

Repeat as many times as you can until it sinks in..

She is still getting faster. If she gets beat by Ledecky or someone else, it’s because they are a faster swimmer, not because of her coach or training. New people come along all the time to surpass the veterans. It’s called progress. I have confidence however that she will be there faster than ever.

I’m still trying to wrap my head around a woman going under 1:40. Really it is amazing.