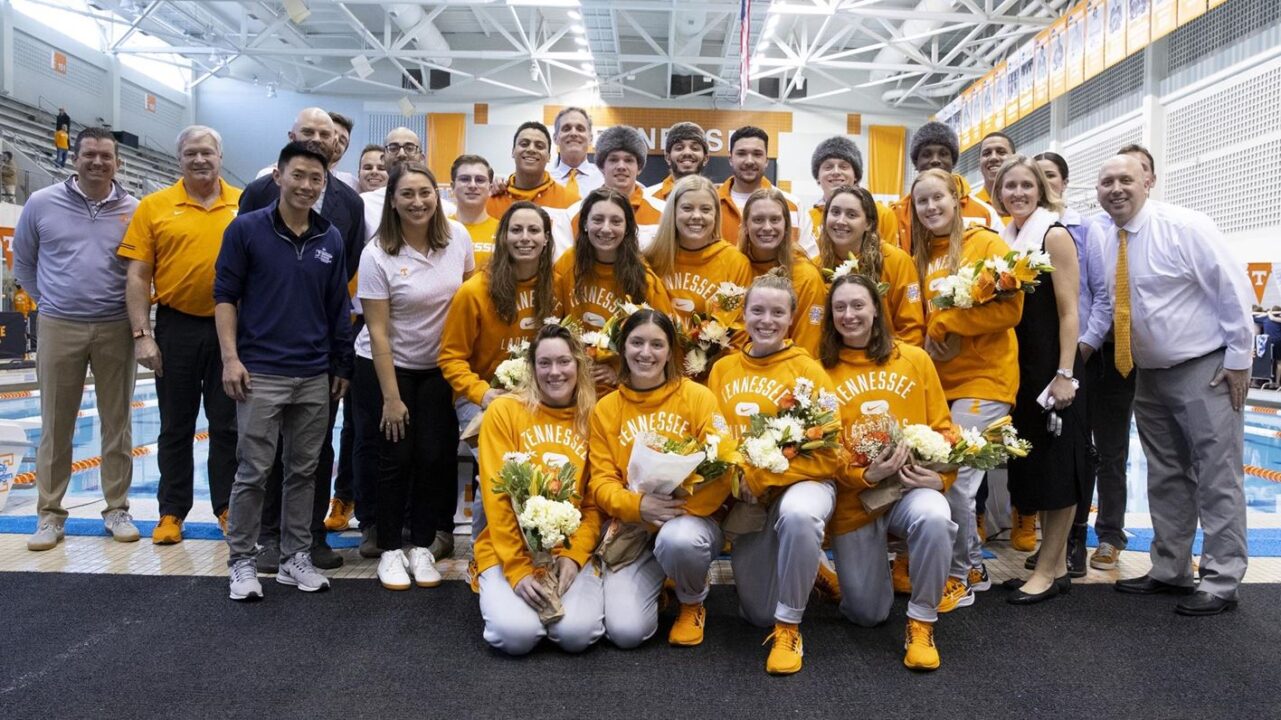 Caldow shined with two individual wins and four best times as the Vols celebrated their senior class with a decisive sweep. Current photo via Tennessee Athletics

Tennessee finished up its dual meet season on Saturday with a sweep of Carson-Newman, with the Vols putting up several noteworthy performances while celebrating their senior class.

Tennessee sophomore Elle Caldow stole the show, winning a pair of individual events while also putting up the fastest time swimming exhibition in another.

She also lowered her three-year-old PB in the 100 back, clocking 52.60 to post the event’s fastest time despite swimming it as exhibition. Caldow’s previous best of 53.53 was set at the ISCA TYR Junior Nationals in March 2019.

Another sophomore, Jasmine Rumley, dropped a monstrous swim in the 50 free, winning in 22.15 while resetting her best time set at the Tennessee Invite in November (22.31). Junior Anna-Julia Kutsch took second to Rumley (22.23), and prior to that, both swimmers split sub-22 on the 200 medley relay. Rumley anchored the ‘A’ team in 21.58, while Kutsch blasted a 21.44 for the ‘B’ squad.

Freshman Jordan Crooks had a strong performance in the 200 free, lowering his PB down to 1:35.04 en route to the win over teammate Aleksey Tarasenko (1:36.60).

“From our younger guys, Joey Tepper was outstanding. He continued his meteoric rise. He moved into the record books today,” Tennessee associate head coach Rich Murphy told Tennesee Athletics. “He is a guy who really puts in the work, and it’s really rewarding to see him succeed. Jordan Crooks was very strong. He was knocking on the door of top-10 times in the 200 free and 100 fly, which are events he doesn’t typically do in dual meets.”

Tennessee will now turn its attention to the SEC Championships, which they’ll be hosting Feb. 15-19.

Congratulations Elle on a great swim weekend! Keep it rolling.

Some really fast swims. Olivia Harper deserves a shoutout too. How many girls can we take to SECs?

SECs looking to be a fun meet!

Vol women look dangerous. They will crush SECs if they keep it up.