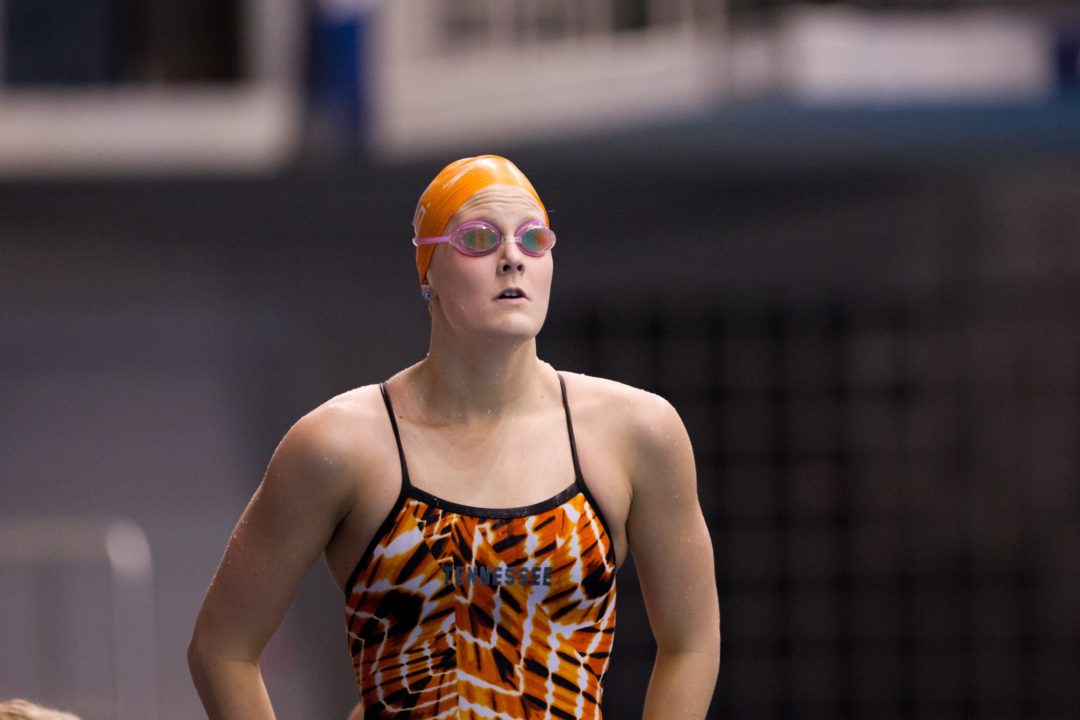 Lindsay Gendron won three key races for the Volunteers, and for the second-straight year, they've upset an SEC rival on the team's senior day.

Last year, the Tennessee women upset the Georgia Bulldogs on their senior day. At the time, everyone presumed that the Volunteers were over-rested, and it would cost them at NCAA’s.

With the context that we all now know how that played out, with Tennessee finishing 3rd at NCAA’s and having arguably their best national championship meet in program history, the Vols have pulled off another big in-conference win on Saturday: this one against the Florida Gators by a score of 152-148.

Meanwhile, in the men’s meet, the Gators had no trouble handling their opponents, winning by a score of 179-121.

Tennessee’s 200 medley relay set the tone early in this meet with a veritable manhandling of Florida in the 200 medley relay: an event in which the Gators have looked really good all year long. The final time for the Volunteers was a 1:38.64 as compared to a 1:41.13 from Florida’s “A” relay.

Most of the splits were off in this relay, but the one that seems to have come through true is Tennessee’s Lauren Solernou splitting 25.17 to beat Florida’s Sinead Russell (25,72) on the lead-off leg.

Florida’s Alicia Mathieu started off the individual swimming with a very good 1000 for the Gators, winning in 9:51.75. The Florida distance group has been good all year long, and they took the top three spots in this race, including a 9:52.27 from freshman Autumn Finke.

Mathieu wasn’t quite as good in the 500 free later in the meet; in that race, she was a 4:53 for 5th place, which was only a few seconds faster than she was in the first half of her 1000.

That 500 was won by Tennessee’s Lindsay Gendron in 4:44.63, which was one of three individual wins for her.

Gendron, truly, was Tennessee’s MVP in this win that could be fairly termed a mild upset. In the 200 free, she swam a huge 1:45.59 to beat Florida’s Elizabeth Beisel, who was 2nd in 1:46.88. Tennessee took three of the top four spots in this race.

There was some interesting strategy going on in those 200 free entries, and it turned out to be a key race, despite being early. Florida coach Gregg Troy took a calculated risk by using Elizabeth Beisel in that race. He had to use one of his “stars” in the event; while Florida has some very good 200 freestylers for relay purposes, most of them are good in ‘something else.’ Knowing how deep Tennessee is in that race right now, Troy used Beisel, possibly in hopes that she could pull off a win and at least come close to splitting points in the event.

Beisel did, however, wind up with a strong season-best time out of the matter, so everyone comes out of the race with good swims under their belts.

Those two wins are two big swing results for the Volunteers.

Still, even with those results, and a split of the diving events, Florida still had a lead going into that final relay. That was partially because they’re a very deep team, the deepest that they’ve been since winning the NCAA title in 2010.

It’s also because there were some events where Florida absolutely dominated. In the 200 yard backstroke, for example, Elizabeth Beisel blew away the field with a 1:55.77, and Florida took a 1-2-3 finish in the race as the top five were all under two minutes: overall a spectacular show from both sides. That’s maximum points for Florida and a 13-point margin in a single event.

They then did the same in the 200 IM (that race was actually a 1-2-3-4 finish, though only 3 can score in each event). Lindsey McKnight led the way in that race with a 2:00.47, followed by Luthersdottir, Rebecca Rainer, and Ashlee Linn. That’s another 13-point event margin to push the Gators into the lead going into that last event.

In that final relay, Florida would’ve needed to win to beat Tennessee, or go 2-3 to tie them. Tennessee wound up gambling on their relays and split their top sprinters a bit. They trusted the hot hand Solernou would have enough in a 100 free to hold off Florida, and used Bruens on the “B” relay to help fight off Florida’s “A”. While the strategy didn’t hurt them (their A won in 3:19.73, a second-and-a-half ahead of Florida), it ultimately was moot as Florida’s B relay (and Tennessee’s C) DQ’ed to seal things for the Volunteers.

The men’s meet was without nearly as much drama as the women’s was in the scoring, but again both teams had a lot of good results.

Those two would match up again in the 50 free, and this time it was deBorde who won in 19.96. It was actually Tennessee’s Oytsein Hetland (who was the butterflier on the medley) that took 2nd in that race in 20.30, with Percy 3rd in 20.47.

In the 100 free, it was deBorde over Sam Rairden 44.47-44.60. Though deBorde is the better sprinter of those two, with Rairden having an on-fire meet, that’s still an impressive win for the Gator.

He then had a sizable break before a big showdown with Tennessee All-American sophomore Sean Lehane in the 200 back.

If there’s one takeaway, though, from this meet for a Florida men, it’s the continued success of their 400 free relay. Tennessee’s relay was on their game and swam a 2:55.99, but Florida’s relay was even better with a 2:55.32. Florida’s got 1 sprinter, deBorde, and some classic international-style swimmers in Marcin Cieslak, Corey Main, and Sebastien Rousseau to join him on whichever sprint relays they choose. Those guys aren’t pure freestylers to say the least, but by ‘international-style’ swimmer we’re referring to not where they come from, but rather the fact that they’re able to break out some nasty sprint freestyle races on relays. Here, that included a 42.94 from Main on their 3rd leg.

Both teams are now done with competition until they meet again in Athens, Georgia for the SEC Championship meet.

If I’m not mistaken, Tennessee was suited

1) Florida has every right to suit as well
2) Those we spoke to who were at the meet said that both teams were suited for a few events here-or-there.

Like you said both teams probably had people suited. It is normal this time of the year because some of swimmers are trying to make the conference team or maybe get a better time for conference. I know Florida had five or six trying to make the last two spots….I am betting that they suited to give themselves the best chance at making the sqad

Obviously Florida has a right to suit up, but I was just making an observation.

Go get’em Autumn Finke. A SPA alum swimming at a perennial division I powerhouse and doing St. Pete Aquatics proud. Congrats to her.

0
0
Reply
Saw the Meet in Person

Can’t speak for FL reasons for wearing suits but TN swimmers in suits were competing for SEC team spots. Want to also add that very few points were scored by those swimmers (on the women’s side) didn’t pay close attention to the men’s. No event winners or winning relay swimmers wearing suits. Can’t the winner just be the winner without suits being the reason?