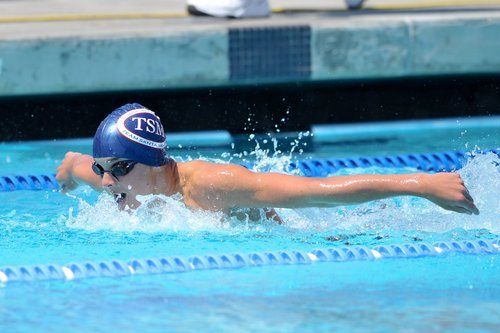 The University of Arizona Men’s Swimming and Diving Team has received a verbal commitment from distance and open water stud Nicholas... Current photo via Nick Devito

The University of Arizona Men’s Swimming and Diving Team has received a verbal commitment from distance and open water stud Nicholas DeVito out of Playa Del Rey, California. He represents Loyola High School during High School season and Team Santa Monica on the club level, and is a very capable distance swimmer both in the pool and in the open water arena. He has bests of  4:26/9:30/15:50 in the 500-1000-1650 freestyles, and in long course, he has been a 4:08/8:34/16:13 in the 400/800/1500 freestyles.

“It was important to me to choose a university that not only had a great business school but also had a highly regarded swim program,” DeVito said. “The University of Arizona fit these requirements perfectly for me. During my visit, I quickly realized that their dedication to consistently developing champion swimmers and also appeared to be a close team.”

Notably, DeVito is a proficient open water swimmer who is a member of the National Junior Open Water Team. He was 18th at the 2013 US Open Water Nationals in the Men’s 10K race and he was also 29th in the 5K at the competition. He is from the same club team as Northwestern sophomore Jordan Wilimovsky, who placed 14th at the 2013 World Championships in the 25 kilometer race, and both swimmers have trained under the tutelage of TSM head coach David Kelsheimer, who has seen a number of his athletes rise to open water success. This includes Brendan Casey, who was 6th at the 2012 Junior Open Water World Championships in the 14-16 age group in the 5K and Liliana Casso, who placed 17th in the 17-18 age group in the women’s 7.5K at the same competition.

The Wildcats were very strong all-around last season, though they will soon lose NCAA All-American senior Matt Barber (1:34 200 free, 4:13 500 freestyle, 15:15 1,650 freestyle) to graduation, and this is why head coach Eric Hansen has been on the lookout for distance talent. Just earlier this week, the Wildcats received another verbal from Chris Wieser, who is a distance specialist out of Jesuit High School in the Sac-Joaquin Section in California. Wieser is a 4:23.01 in the 500 free and a 15:27.08 in the 1650 from a year ago at the 2012 Winter Junior Nationals meet.  He is also a phenomenal long course swimmer, with a personal best of 15:36 in the 1500 lcm freestyle.

Wieser and DeVito will combined to give the Wildcats a very solid foothold in distance swimming for quite some time. The Wildcats did not enter any swimmers in the 1650 at conference last year, and now it appears they are poised to have multiple scorers in years to come.  As we mentioned in our article about Chris Wieser though, Arizona is an NCAA-focused program, so the rest may not be there for DeVito at the conference championships, but there is little doubt he will still be an impact swimmer for the Wildcats for the 2014-15 season.

Good on ya little D!