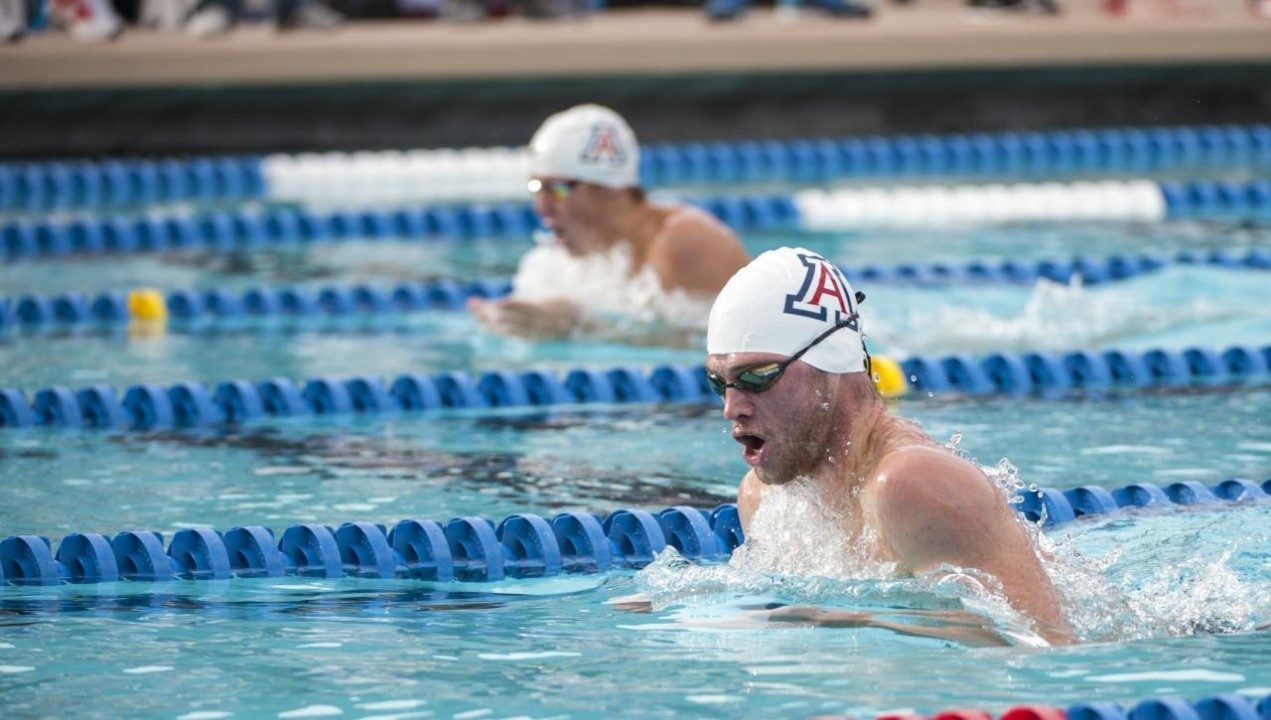 Kevin Cordes doubled up and won both the breaststrokes in Arizona's big win over ASU. Current photo via Arizona Athletics

Full meet results here. (no splits available from these results)

The highlight of the women’s meet came at the very end, as the #11 Wildcats put together a very impressive 200 free relay to qualify for NCAA’s. The squad of Taylor Schick, Bonnie Brandon, Katja Hajdinjak, and Paige Kremer was 1:30.74 at the Texas Invite, one of the midseason invites where many teams taper to some extent in order to grab NCAA cuts, which was off of the B cut of 1:30.17. Today, however,

ASU hung tough, pushing for several wins despite Arizona’s depth. Most notably in the victory column were Kat Simonovic, who took the 200 free (1:47.13) by almost a full second, and Ingibjorg Jonsdottir had a stellar swim in the 100 back (52.96) to upend Brandon. The Sun Devils were also under 1:39 in the opening 200 medley relay, but they were edged by the Wildcats by a slim margin of seven hundredths. Arizona ended up on top, 176.5-118.5.

The Arizona men, tied for 18th in the country, started things off with sparks flying after their 200 medley relay. Finishing in a very quick time of 1:26.91, the relay featured senior Brad Tandy who absolutely scorched the anchor leg in 18.99. Granted, there have been pictures from the meet posted to Twitter and every swimmer looked to be suited, but that’s a fantastic swim for Tandy pre-championships season. He followed that up with a 19.89 in the individual 50 to take that event for the Wildcats.

Kevin Cordes, who has been upset in the recent weeks in his signature breaststroke, took home firsts in the 100 and 200 breaststrokes. His 100 was much more impressive, as he posted a 53.52 for the win after usually being in the 54 range this year. He was 1:58.44 in the 200 version of that event for the victory, which is right around what he’s been going in the last few weeks.

After this dominating performance over ASU, the Wildcats will prepare for the 2015 Pac-12 Championships. The women’s champs begin February 25th, while the men’s begin a week later, on March 4th.

The Devils are in the details!!

How dare you Swimswam! Using all the information you have to give as accurate a report as possible? Maybe the Arizona state twitter account wasn’t doing as good of a job with updates but you should have been able to guess what was going on.