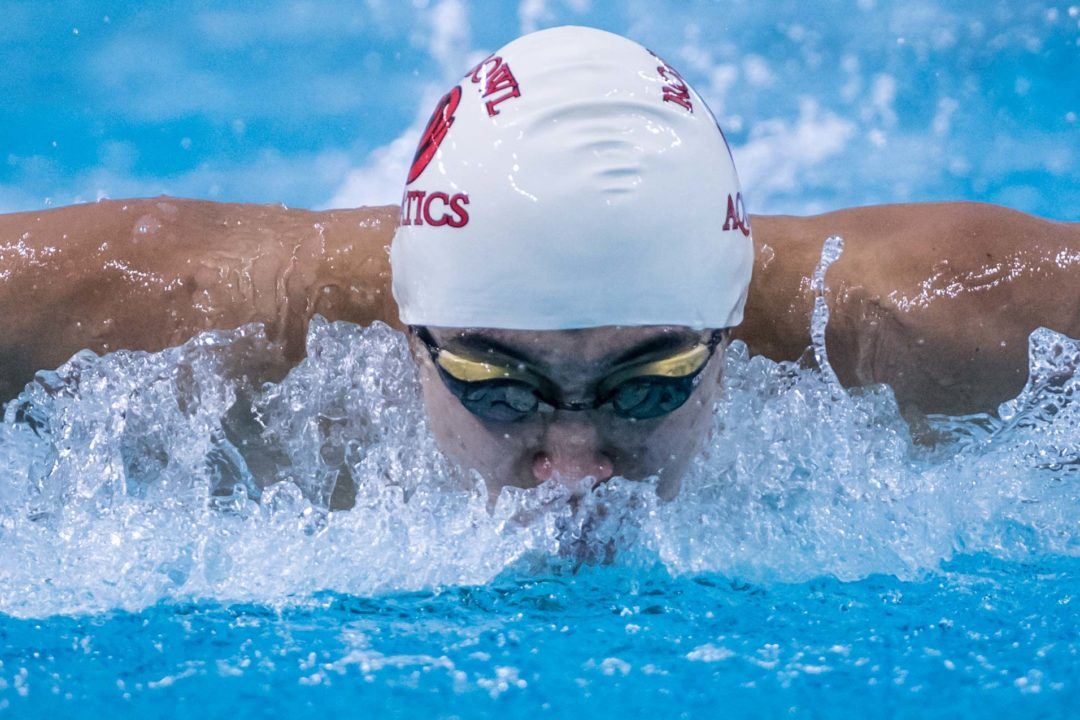 After Friday’s preliminary session saw a pair of Division 2 meet records from Mira Costa junior Alexandra Crisera, two more fell at Saturday’s afternoon finals of the CIF-SS Division 2  Championships in Riverside. Both came on the boys side, as Danny Syrkin of La Canada and Andrew Koustik of Calvary Chapel-Santa Ana took down marks in the 100 back and 100 breast respectively.

In the team race, the Los Osos girls came out on top with 254.5 points, and the Foothill boys did the same with 249 points. Check out full recaps for the girls and boys below.

After Crisera was the big story on Friday, it was Elise Garcia of Crean Lutheran and Emily Trieu of Los Osos who were the big performers on Saturday, each earning two individual wins. Garcia started with a win in the 50 free, touching in 22.71, with teammate Mandy Brenner maintaining her runner-up position in 23.37. About 25 minutes later Garcia dipped below the 53-second barrier in the 100 fly, winning by a landslide in 52.92. Autumn D’Arcy of Redlands took 2nd in 54.78.

The two record swims were the highlights for the boys, with both coming towards the end of the meet. La Canada’s Syrkin used his big time speed to get out ahead early in the 100 fly, getting to the wall in 47.48 to take down the eight-year-old record of Chase Bloch (47.55). He also won the 100 back in 48.87, again using crazy speed to get out ahead and hang on.

While he didn’t break any records, Zane Scott of Foothill was the only one on the boys side to win multiple individual events, as he came away with the sprint double in the 50/100 free. He edged out top seed Bart Salvaterra in the 50, clocking 20.96 as Salvaterra tied with Mira Costa’s Colin Le for 2nd in 21.15. In the 100, Scott narrowly out-touched teammate Hunter Ingram, 45.36 to 45.42.

Ingram, who came into the day with the top seed in both of his events, faded late in the 200 free and ended up taking 4th in 1:39.35. Christopher Mykkanen, another one of his Foothill teammates, nailed down the win with a blistering final 50 in 1:38.68, getting by Mira Costa’s Christian Bathurst (1:38.83).