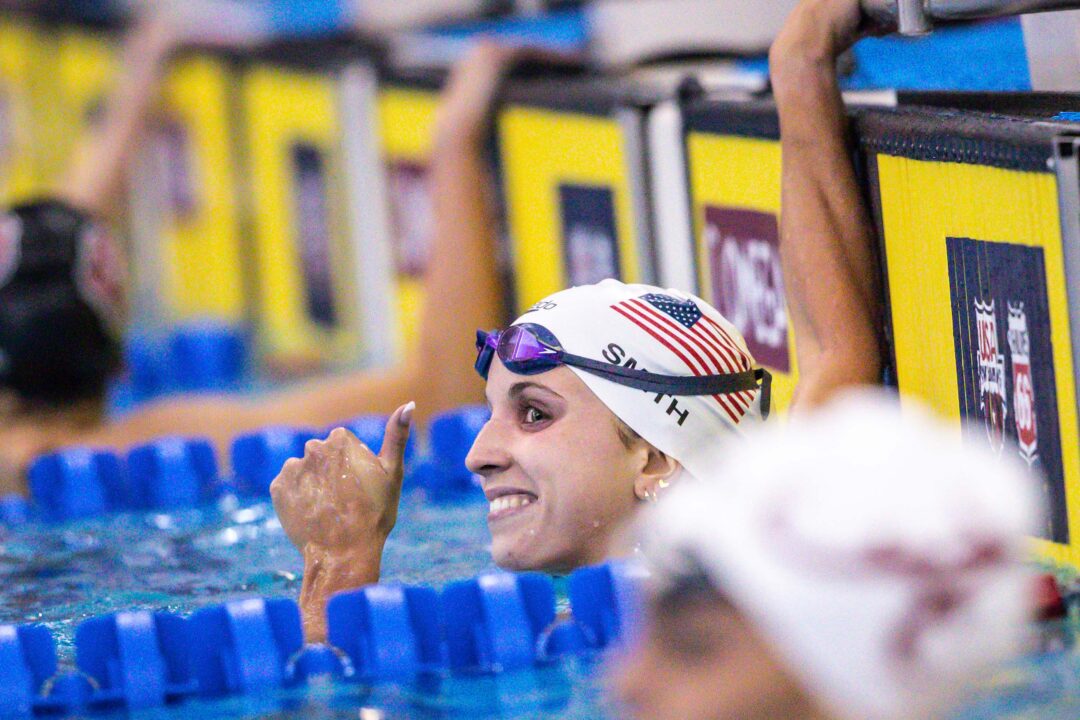 The majority of SwimSwam readers believe Regan Smith made the correct decision in opting to turn pro and join Bob Bowman in Arizona. Archive photo via Jack Spitser/Spitser Photography

The race for sixth is expected to be a tight one at the 2023 Women’s NCAAs after 6th-9th place were separated by just 31.5 points last season.

Our most recent poll asked SwimSwam readers if Regan Smith made the right move in opting out of the NCAA and turning professional:

The news sent shockwaves through the swimming community. Regan Smith, after only one season swimming at Stanford University, opted to forgo her final three years of NCAA eligibility and turn professional, heading to Tempe, Arizona to join coaching great Bob Bowman.

Smith committed to Stanford back in the summer of 2019, and after deferring her freshman season to prepare for the postponed Olympic Games, didn’t suit up for the Cardinal until the fall of 2021.

After a very successful freshman campaign that included winning the national title in the 200 backstroke, Smith’s highly-anticipated NCAA career has come to an abrupt halt.

The 20-year-old did show progress in the long course pool since heading to The Farm, including winning the 2022 world title in the women’s 100 back, but ultimately felt she needed more of an individualized focus to take full advantage of her competitive window.

“After spending a substantial part of the last two years on my mental game, it’s time to focus on increasing my training intensity,” Smith said when announcing her decision. “I’m entirely confident that Bob’s leadership and training will have me exactly where I want to be for Paris 2024.

“I believe that, in the long run, this is the best way for me to continue to develop as an athlete.”

Smith’s decision led to plenty of debate on whether or not it was the right move, especially with history telling us female swimmers going pro early doesn’t always work out.

But more than 71 percent of readers believe the change will be a good one for Smith, as she’ll be joining Bowman, one of the greatest coaches in swimming history, and an ever-growing pro group at Arizona State that already includes one of Smith’s primary domestic competitors, Hali Flickinger.

28.9 percent believe it wasn’t the right move, and that perhaps she should’ve stayed the course in the NCAA after a successful last 12 months.

Below, vote in our new A3 Performance Poll, which asks: After Popovici’s 100 free world record swim in the 100 free, which super-suited mark will be the next to fall?

It may be best for Regan’s career, but I doubt the Stanford coaching staff would agree. I gathered from the interview that her departure was entirely unexpected. Correct me if I’m wrong.

She’s an adult and an incredibly accomplished athlete. I have every confidence that she’s making the right decision for herself.

Who am I to say otherwise?

Not surprising since at least 71% of swimswam commenters hate Stanford

I don’t hate Stanford but Greg Meehan has been living off his laurels for far too long.

Guess we all kinda knew but never appreciated how insane Piersol’s 200 Back WR was, went so under the radar in most discussions here. It’s been sitting comfortably in the past decade after prime Irie and Lochte and it honestly seems further than W200 Fly IMO

Yeah with Rylov gone for the foreseeable future and Murphy likely being past his prime in this event, there doesn’t seem to be anyone in the world that could even come close to that time.
But if we’ve learned one thing in the past few years it’s that all it will take is for a talent like Popivici or Milak to show up in the backstroke and suddenly this record could suddenly be smashed.

I honestly rate Lochte’s 1:52.7 more highly than that WR.

Piersol’s best time without a rubber suit was 1:54.4, it’s almost as big of a spread as Biedermann’s suited vs. unsuited 200 free and that one gets clowned constantly.

1:54.4 is still a great time today obviously and Piersol still has a strong goat argument for Backstroke but I feel that WR should be Lochte’s.

He was just using leggings though, so probably helped him about 1-1.5 seconds instead of 2.8 like Biedermann’s. Agree that Lochte is the true wr holder.

Those leggings helped a lot.

At those same Worlds, Aaron Peirsol went 25.30 in the 50 back, and 53.22 in the 100, so clearly these leggings greatly enhanced his leg position/endurance in the 200 back, as he didn’t display much in the way of speed or power in the shorter events.

If you don’t think Peirsol could’ve held his own against Lochte going 1:52.7 in a jammer, you’re probably not giving him enough credit. Dude is the backstroke GOAT.

He also talks about the super suits here:
https://youtu.be/sJj46rWjYT4

while i agree that 200bk wr is very fast (as we could say all wrs are…) it doesn’t really seem equivalent to w200 fly. men get within 2 seconds of the 200bk wr relatively regularly compared to w200 fly. pretty much every wc or olympic final one or two guys go 1:53. no woman has ever been within 2 seconds of the w200 fly (yufei came closest at 2.05s)