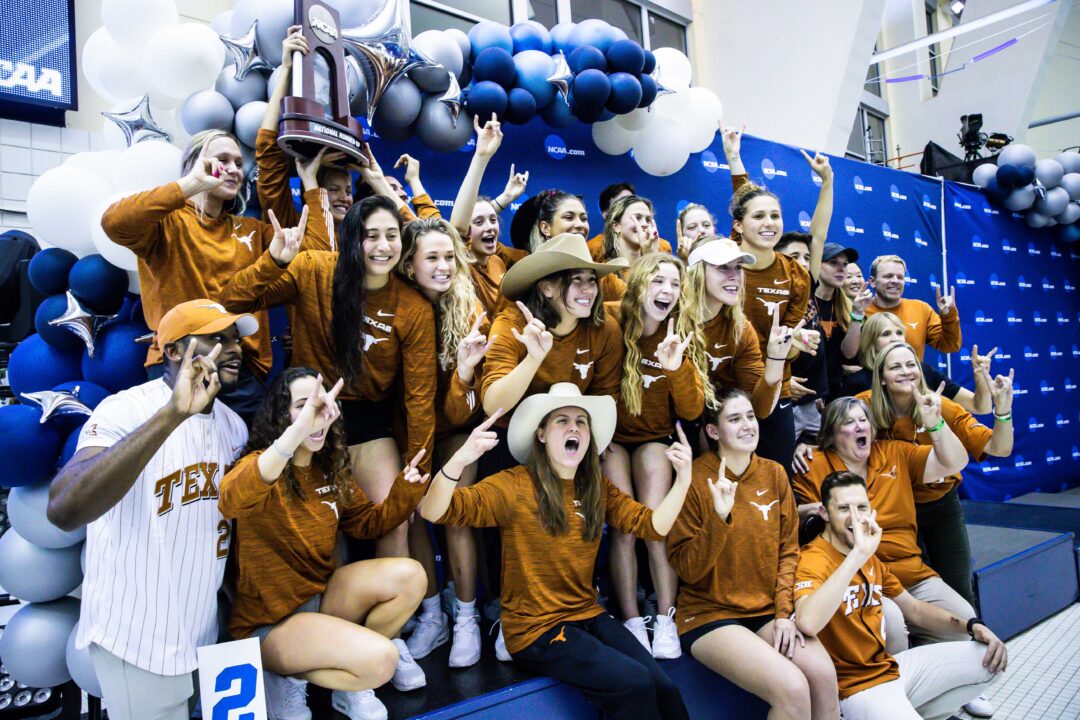 The Longhorns outscored their projected psych sheet points by 83.5, the most of any team at the championships, en route to placing second overall. Archive photo via Jack Spitser/Spitser Photography

Our most recent poll asked SwimSwam readers which women’s team outperformed expectations the most at the NCAA Championships:

Question: Which team exceeded expectations the most at women’s NCAAs?

Coming in at nearly 71 percent, the University of Texas women dominated the poll, pulling off an upset runner-up finish over the Stanford Cardinal.

The Virginia Cavaliers came in as the defending champions and were the undisputed favorites to repeat, but the prevailing sentiment was that Stanford was the clear #2 and would have a chance to keep things interesting with UVA.

The Cavs ended up dominating, but Texas performed exceptionally well in the pool and picked up 90 diving points to edge out the Cardinal by six and a half points, 406 to 399.5, to claim second, the program’s highest finish since 1994.

The Longhorns outscored their projected psych sheet points by 83.5, which was the most of any team at the championships. They had six swimmers score 25+ points individually, led by junior Kelly Pash with 44.

Just under 16 percent of voters selected the Florida Gators, who were only seeded to score 16 points in the pool and ended up putting more than 6x that number (99) to finish 13th overall, also adding 17 diving points.

13 percent voted for the Louisville Cardinals, who were 13th last season and seeded 12th based on psych sheet scoring but put up 62 points more than their projections to finish sixth.

For the 32.7 percent of you that voted for Leon Marchand to score the most individual points at Men’s NCAAs, you were right!

Marchand won two events and was the runner-up in the other to score 57 points, with LSU’s Brooks Curry (53), Cal’s Destin Lasco (52) and Georgia’s Luca Urlando (50) also putting up 50+ points.

Lasco (5.4%) and Urlando (2.7%) received the fifth and eighth-most votes in the poll, respectively, while Curry wasn’t even included and had a standout showing with two wins (50/100 free) and a third ‘A’ final appearance in the 200 free.

Below, vote in our new A3 Performance Poll, which asks: What was the biggest upset of the NCAA Championships: