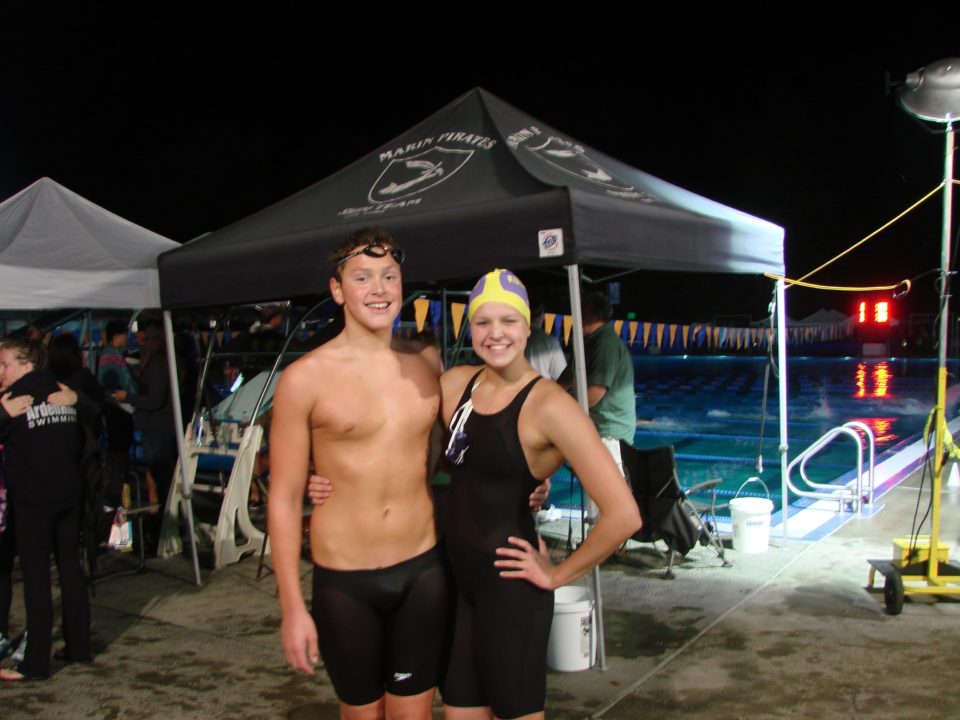 November weather in Northern California can be a crapshoot.  But this weekend (Nov 8 – 10), just before the rain... Current photo via Dean Ottati

November weather in Northern California can be a crapshoot.  But this weekend (Nov 8 – 10), just before the rain is set to move into the area, it broke perfectly for the Concord Terrapins Senior IV meet.   Typically, with morning prelims followed by three heats of evening finals, this meet is a good mid season tune-up before the fall season taper meets in December.  This year was no different, highlighted by some solid swimming hinting at even greater swims later.

On the women’s side in the 1000 free, Novaquatics’s Brittany Kamper, also 15, steadily pulled away from the field finishing in a 10:03.13.  While on the men’s side, it was 28 year old Bobby Yribarren who kept the youngsters from sweeping all the evening’s events, with a winning time of 9:32.53.

On the men’s side, the Saturday evening finals presented two great Lion King circle-of-life duals between 23 year-old Stanford graduate Aaron Wayne, and 17 year-old rising star Justin Lynch.  And this time, it was the old lion telling the younger one: “Not just yet.”   In the 50 free Wayne made an immediate statement, pulling away from the field in a 19.96, followed by Lynch (21.1) and Matt Horner (21.31).  Twenty minutes later, the two lions were at it again, this time in the 100 fly, with Wayne winning in a 47.39, followed by Lynch (48.96), and Monty Randall placing third (49.92).

Finally, in perhaps the best feel good story of the evening, Sara Delay continues to fight back into form, rebounding from some very serious medical issues, winning the 50 free in 23.62.

Chloe Isleta at the start of the prelims 100 BK. Photo Credit: Dean Ottati

After a warm and sunny set of prelims, the temperature began to drop into a more seasonable range for the finals.

In the 100 freestyles, Sara Delay took her second sprint title with a winning time of 51.46, and Neptune Swimming’s Jon Knox took his first title of the meet in a 46.76.

Heidi Poppe also added her second title of the meet, winning the 100 BR in 1:01.52, but this time her brother Hank couldn’t quite match his sister.  Even with a lifetime best of 57.12, he finished second to DACA’s Dar Chan Chin Wah who won the event with a 56.98.

Finally in the last event of the evening, the meet closed just as it opened on Friday night, with Chole Isleta (55.01) and Benjamin Ho (50.09) winning their respective events, the 100 back.

Isleta finished the meet with five individual titles.   Now, for all the men and women “Who Came…Who Saw…Who Concord,”  it’s off to more training before the various big shows next month.

Yes, I noticed this too… why??? Isn’t CrowSharks the super team in the area?

That’s right, Kasey Carlson did the same thing… she was a Terrapin originally, I forgot about her switching too. I don’t know the reasons behind the switch but I do know Mike Heany (Head coach WCAB) is a GREAT coach, and who wouldn’t want to swim for him and his assistant coaches?

Watching NorCal swimming, their have been quite a few swimmers switching teams. Brittany Usinger, who was a star as a 13 year old when she was con crow canyon, switched to the aquabears. About a year ago a think, Ariana Saghafi another super strong 14-under swimmer switched to Terrapins from crow canyon. And now Poppe switching? Hmmmm

Crow Canyon Sharks is one of many great teams in the area…. That 680 corridor and nearby is replete w/ great year round swim teams and coaches… Pleasanton, SRVLA, Terrapins, WCAB, Orinda, Crow Canyon, to name a few… plus many super competitive rec teams that act as feeders for the year round teams and HS swim teams. Lots of talented swimmers and excellent coaches. Team switching isn’t unusual, maybe not ideal, but not unheard of.

I heard there was a row on deck between two coaches over the summer regarding actively poaching swimmers in the East Bay. Nasty business

Yes, I noticed this too… why??? Isn’t CrowSharks the super team in the area?

I’m an old guy and don’t get to see many swim meets anymore since the kids are grown up, but because I live close was able to sneak on over and see some of the races and seeing Aaron Wayne rip up the 50Fr was really special not to mention some of the other races. The evening weather was spectacular. Superb article!!!

SwimSwam has been doing an excellent job producing all this content as of recent. Something that you may want to consider is a list on the home page that provides the past 10-or-so news stories (or maybe just meet recaps). This way they are easier accessed and there’s less chance of missing some of the articles. If you want to visualize exactly what I mean, ESPN has this feature on all of its sports home pages. Keep up the outstanding content!