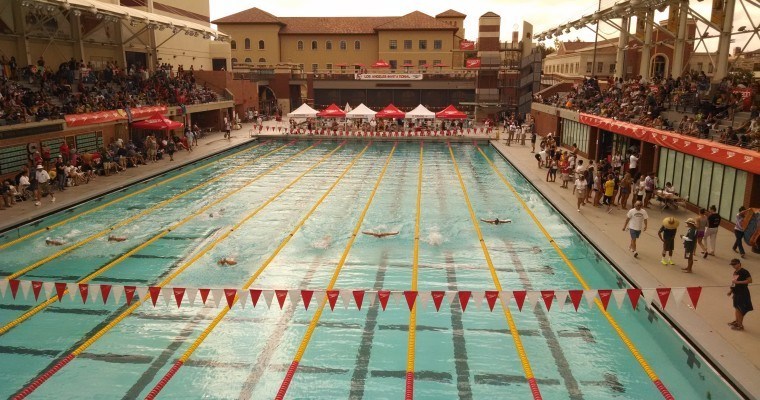 USC's Uytengsu Aquatic Center, where the Trojans defeated Cal in a narrow one point victory. Archive photo via Anne Lepesant

Roses are red, LZR's are black, you make me breathless just like the 200 back @swimswamnews

Happy Valentine’s Day, hope you don’t have to do a 200 back today!

SWIMMING CAN BE REALLY FUN SWIMMING IS FOR EVERYONE ???

A big birthday gift: an NCAA title. Can Indiana freshman Lilly King make herself the collegiate breaststroke queen in March?

Did @USCSwim's Kyle Grissom have the #12Best Play of the Week?!

That was BIG. USC freshman Kyle Grissom came back hard on Cal frosh Andrew Seliskar in the 200 free relay, clinching the one point win for the Trojans over the Bears. This was the first win for USC in a dual with Cal since 2000. Read the full meet recap here.

When your coach asks you to do 100s at 200 pace like it's not even hard pic.twitter.com/w30ChwRcGA

Coaches just DON’T GET IT.

Selfie with SwimMAC coach David Marsh, not bad, not bad at all.

I relay don’t want to get in for warmup. I relay am not excited to swim the 400 IM next weekend. I relay love taper!

An incredible feat by @carmelathletics today. A record for consecutive HS state titles in any sport. #30 #excellence pic.twitter.com/Dg8LgqrUEm

Dabbed on the block at sectionals and almost got kicked out #WorthItTho pic.twitter.com/QCsf9zFJqn

Wait, did the guy almost get kicked out for dabbing, or for falling in?

Not the type of dabbing than I was expecting.