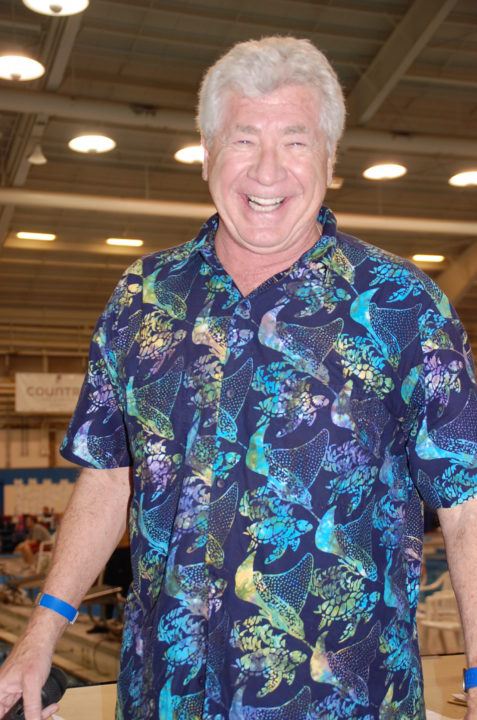 We have just learned of the passing of Kevin Polansky, the “voice” of the NAIA National Championships, the NCAA Division... Archive photo via Anne Lepesant

I am personally heartbroken. Kevin is one of the first people I met, the first time I put on a SwimSwam shirt, at the 2013 NAIA National Championships in Oklahoma City. He immediately welcomed me and treated me with such respect that he gave me the confidence I didn’t really have (or deserve, even) to cover my first meet for SwimSwam. Kevin had a warm and caring approach to his announcing, as if each swimmer was one of his own. He knew how to pronounce all their names, he knew their stories, and he helped more than one break pool, meet, conference, and national records by getting the crowd to rally behind the swimmer. I continued to cover the BMC Championships, although my own child had finished swimming there, to hear Kevin on the live stream.

Kevin swam in college at Minnesota State University, Mankato, where he was captain of the men’s team and Swimmer of the Year in 1972-73. He spent 20 years teaching PE and social studies in the Thompson R-2J School District and was Aquatic Director and Head Swimming and Diving Coach. He was named Colorado high school Coach-of- the-Year on four occasions.

Kevin was a longtime coach at Loveland Swim Club and founded Loveland Masters Swim Club in 1978. He  has held numerous Masters world records and national records, and he ran the first Masters training camp at the U.S. Olympic Training Center in the summer of 1993. Kevin touched the lives of countless members of the international swimming community and he will be greatly missed.

What a great loss! I had been friends with Kevin since the late 60’s , when as a college swimmer , he swam
in an Iowa long course meet in his home town of Mason City, Iowa( outdoors and cold!!). I was a 15 y/o swimming against Kevin and other college swimmers in the 400 IM and had just moved to Iowa from Chicago. I won the event and Kevin was the first and the ONLY swimmer to come up and congratulate me! For a high school kid to have a college swimmer acknowledge me was a big thrill and I never forgot that. We kept in touch all these years ( NCAA’s, Omaha Olympic Trials , Maui Channel… Read more »

As a diver from Loveland CO, I met Kevin at my first DII national meet. Far away from home, he was always a warm and familiar face I looked forward to seeing and hear at the conference and national swim meets. As a DII athlete, and later a coach, I always looked forward to checking in with him on the pool deck and feeling at home. Your love for the sport is reflected in all of the lives of athletes, coaches, spectators, friends and families you inspired. Thank you. You will be forever missed.

It was always an experience to talk to Kevin. He had so much energy and passion for swimming. Im glad to have known him and like everyone else am shocked by this news at such a young age. I think we can all say we would like to go out like Kevin did: doing what he loved most. Thank you for all you did for the swimming community.

Beyond saddened to hear of Kevin’s passing. He was a great friend and always had amazing perspective and mentorship to give out to everyone. Truly made the Division II meet the special event it was, and he will be missed tremendously. Prayers go out to the entire Polansky family, who have had an extremely tragic last 6 months. We miss you Kevin, and will always love you.

Such sad news! And just five months after my own dear sister, Stephanie Walsh Beilman, another champion, supporter, and fan of swimming, passed away. Steph and Kevin were long-time friends through Masters swimming…. The last time I saw Kevin, he was announcing Div II Nationals in Canton, Ohio in 2010. So kind and thoughtful! Swimming will miss him.

I didn’t realize Stephanie was gone; RIP to both.

Kevin Polansky brought so much fine swimming instruction/advice to my USMS work…such a fine human being…had many many chats about hi love for my music world and especially his love for “Jerry Garcia’s” guitar playing and the Grateful Dead.
I will miss my coffee meet up friend forever.
Dallas Schoo/U2 Guitar Tech

Hi Anne-
I’m so sorry to hear about the passing of Kevin. I work for CBS4 in Denver and I am hoping I can have your permission to use this photo during my newscast tonight. I will provide credit for the photo. Also, if you have any other pictures of Kevin that you would like to share that would be greatly appreciated.
Thank you,
Rebecca Valdez

Very, very sad! Such a great guy! His posts on social media were the brightest and most optimistic. Always looked forward to his smile — in person and literally! A great loss to the swimming community

This is a tremendous loss for the swimming community. Kevin was a dear friend and the BMC, NAIA and the SCAD Bees were all better off thanks to his support. Rest in peace, Kevin.