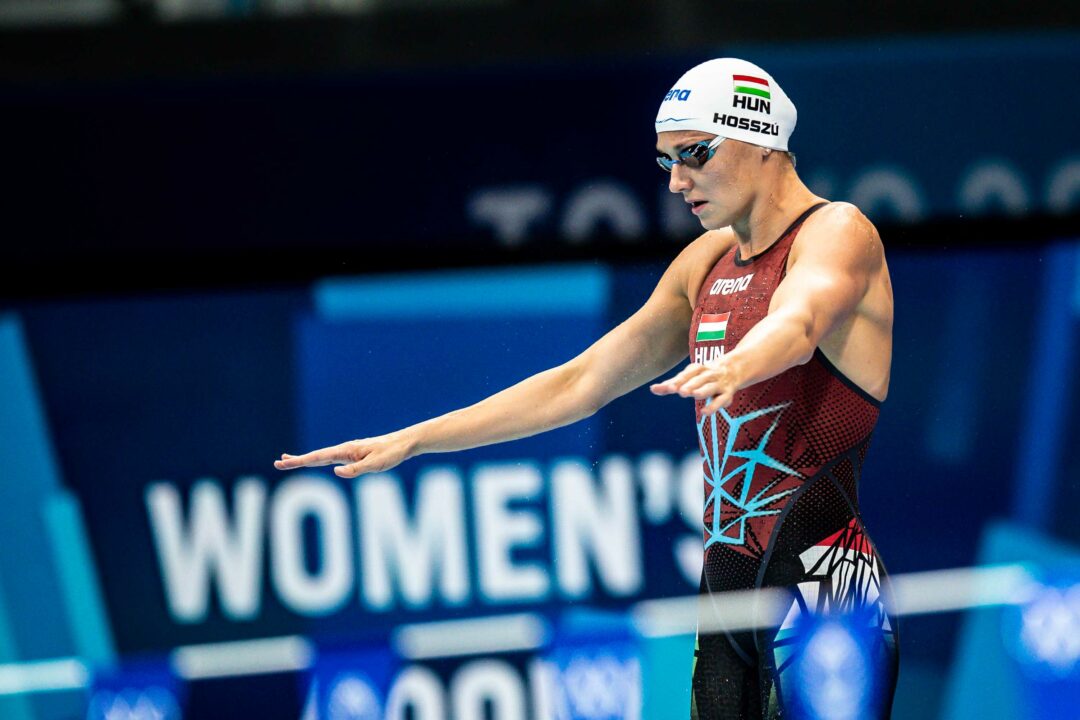 Katinka Hosszu sits tied atop the list with Michael Phelps, with both having won the same event five times at the LC World Championships. Archive photo via Jack Spitser/Spitser Photography

Early on in 2022, Katie Ledecky has been swimming really fast. She even set a time in the 800 freestyle quicker than the time she used to win Olympic gold at Tokyo 2020.

Being unbeatable in the 800 freestyle for over a decade, she will be the heavy favorite to win this event at the 2022 World Championships in Budapest. She’ll vie to become the world champion in the event for the fifth time. But how rare is this feat?

Swimming Stats’ Instagram page has published the list of the swimmers with the most wins in a single individual pool event at FINA World Aquatics Championships. Of course, Ledecky is on the list. But not at the top of it (yet).

Michael Phelps, as usual, consistently appears on this type of list. In 2011, he became the first swimmer to ever win five gold medals in the same individual race, doing in his pet event, the 200 butterfly. Only one other swimmer has achieved the same feat: Katinka Hosszu, who in 2019 reached her fifth win in the 400 IM.

That is, at the 2022 World Championships in Budapest, two swimmers can become the first ones to win the same event five times consecutively. Hosszu is one of them, in the 200 and 400 IM – of course, if she wins the 400 IM, she will also become the first swimmer to win the same event six times. The other one is Ledecky, who has won the 800 free four straight times from 2013 to 2019. Being unbeatable in the event for over a decade, it seems that Ledecky has the best shot.

Another swimmer who can win her fifth gold medal (not consecutive) in her event in Budapest is Sarah Sjostrom in the women’s 100 butterfly.

In 2005, Australia’s Grant Hackett became the first swimmer to win the same event four times in the men’s 1500 free. Before that, it was very difficult to achieve this feat, since, from 1978 to 1998, the World Aquatics Championships were held every four years. From 2001 on, the Championships have been held every two years.

Since Hackett’s feat in 2005, nine other swimmers have won the same individual event four or five times. And certainly, we will see other swimmers joining this list in the next few years. Active swimmers like Adam Peaty (men’s 50 and 100 breaststroke), Yuliya Efimova (women’s 200 breaststroke) and Daiya Seto (men’s 400 IM) have won their events three times and can go for a fourth win in Budapest. Who will be the next to join the list?

Crazy that Lochte won all those 2IM titles in nearly same timeframe MP won majority of his OG 2IM titles.

Way I’ve always seen it is that Lochte’s ceiling at his peak was better than a B+ version of Phelps. Problem is, MP was at a B+ for about a year and a half of his career total. Even in 2009 and 2012 when he was supposed to be hurting from taking time off, lack of motivation, etc he was so blisteringly fast. 2012 was marketed as the year of Lochte, but Phelps only lost shine to him in the 400IM.

…Or they cut a deal