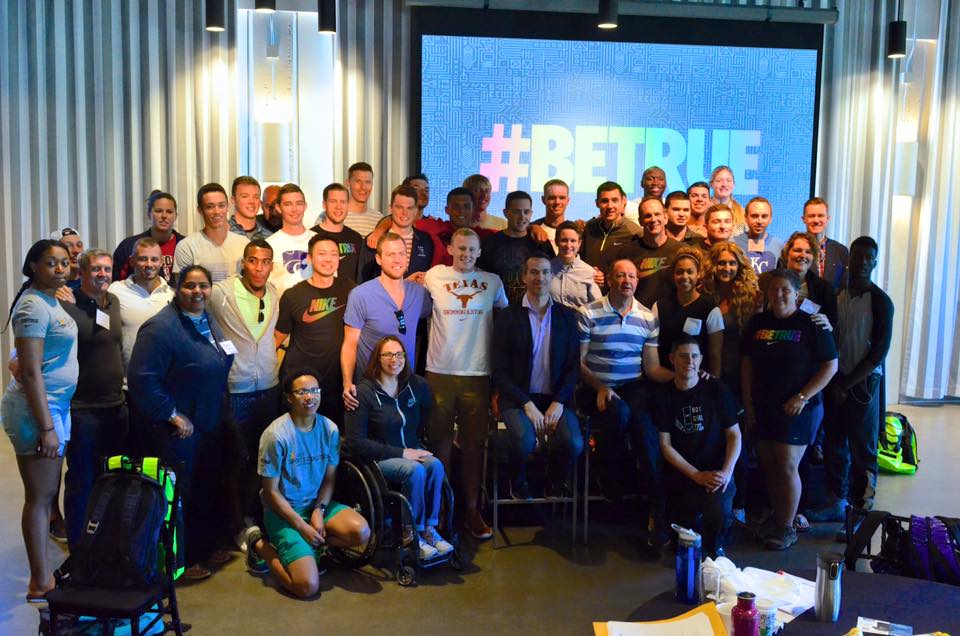 Lauren Neidigh, SwimSwam’s short course yards rankings editor and web producer, attended the Nike LGBT Sports Summit in Oregon last weekend, and below, she shares her experiences from the camp.

We’ve heard time and time again about the struggles that LGBT athletes might face in sports. In swimming, it can be especially difficult. We walk around in swimsuits and spend time with our teammates every single day. But what if they knew you were LGBT? Would they still hang out with you? Would they still accept you as part of the team? Would they assume you were looking at them in a different way?

Maybe you feel too different. You wonder if people that you love and care about won’t accept you because you’re LGBT. You might feel awkward changing in the locker room with your teammates because of how they might perceive you. For some, you may feel so uncomfortable with your identity that you push away your feelings and it gets in the way of your progress as an athlete. Being an LGBT athlete can have its burdens. These questions and thoughts that we have can do serious damage to our mental health.

We’ve seen many swimmers come out as LGBT recently. This can do wonders for helping young, gay swimmers. Nike and the LGBT Sports Coalition have recognized the potential to help LGBT athletes live better lives. Through the Nike LGBT Sports Summit, current and former LGBT athletes, coaches, and administrators were able to network and discuss ways to improve sports environments.

This past weekend, a strong swimming contingent represented our sport at the summit while working with GO! Athletes, a nonprofit organization dedicated to LGBT athletes in high school and college. Both current and former swimmers attended the conference in Portland, Oregon to learn about various LGBT issues in sport. Student athletes from all over North America discussed inclusion, anti-bullying strategies, and responsibilities in social media and mentorship. As a former swimmer at the University of Arizona, it was refreshing to see young swimmers at the summit and share our experiences as LGBT athletes. I learned a lot from these young athletes and look forward to their success in college swimming.

Among the current swimmers present at the summit were Chris Cassingham and Jack Thorne.

Jack Thorne, a swimmer for Thompson Valley, has had a dominant career in Colorado high school swimming. He’s won multiple state championships, including a three-peat in the 100 back. Recently breaking the state record, Jack is now the fastest 100 backstroker in Colorado 4A (small school) swimming history. As a distance swimmer and backstroker, Jack hopes to leave his mark on the NCAA over the next four years at Northwestern. His ambition in academics and athletics is an inspiration to young LGBT athletes who hope to compete at the NCAA level. While embracing his gay identity, he continues to prove that we can all accomplish great things in swimming, regardless of our differences.

Chris Cassingham is a sophomore at the University of Mary Washington. Prior to coming out, Chris suppressed his feelings about his gay identity and walked away from the sport during his club swimming career. Since coming to terms with his gay identity, Chris has worked hard to be the best swimmer that he can be.

Now an openly gay NCAA Athlete, Chris continues to act as a role model for young LGBT Athletes who are struggling. Learning about his story and seeing the positive changes he’s made in his life gives others a chance to identify with him and see the potential for leading a healthy lifestyle while being openly gay.

Anybody who knows Chris knows that his kindness, motivation, and sense of humor make him a great athlete to have on their team. Despite the struggle that many of us face as LGBT athletes, we can all look to Chris as a strong leader and find comfort in knowing that it gets better. Chris and Jack do everything with pride and compassion that makes them exceptional teammates and advocates for the LGBT community.

I encourage everyone, LGBT or not, to get to know these two swimmers if you’re given the chance. What I learned from them is not only that being gay is okay, but that it’s always okay to be yourself. This is something that many of us struggle with from time to time. It’s a blessing to have these young athletes as representatives of swimming. They’ve worked hard to learn about anti-bullying methods and inclusion around the pool deck. I believe that they can significantly impact young swimmers and help them realize their potential and their importance to their teams.

If you, a friend, or a family member is struggling with being an LGBT athlete, reach out to us. I am confident that you will have a positive experience when coming to Jack or Chris, and I am always willing to help out as well. Thanks to Nike and the LGBT Sports Coalition, we have a bigger outlet for LGBT visibility in sports. We can direct you to resources and others who can get you help, or just be a friend. One of the most important things we have all learned from our experience at the Nike LGBT Sports Summit is that we need to stick together. LGBT athletes and their supporters connect to make sports a safer and more inclusive place.

Inclusion and fairness for all. There is no room for prejudice or hatred in sport nor should it be tolerated. Onwards and upwards!

Prejudice should not be “tolerated”? What should society do to those who you feel act or think in a prejudicial way? Lock them up? Reeducation camps?

Did I hit a nerve, Anonymous? A bit angry are you?

Not angry at all Lane Four. Saying something is not going to be tolerated is strong language. I wanted you (and other SwimSwam readers) to have an opportunity to think about your use of that phrase as you may not have fully thought through the ramifications of saying something shouldn’t be tolerated.

Lane four:
No room for prejudice? Does that mean you have no prejudice against those Christians and other religious people who reject glorifying the LGBT lifestyle?

Anonymous, I choose to ignore your obvious anger. More importantly, do you KNOW me? Seriously. Do you KNOW me at all? You are drawing conclusions based on your belief system. I will not be drawn into your baiting. I expressed MY opinion. Apparently yours is quite different than mine. And that is ALL I will say.

Not all Christians reject LGBT lifestyle. Regardless, this isn’t about beliefs or whether or not anyone agrees with each others viewpoints. It’s about allowing everyone an equal opportunity to compete and feel comfortable in the sport of swimming despite our differences in opinions in some cases.

In America our freedoms are unlimited, our freedoms are limited when they start to limit the freedom of others. There countless examples across a wide range of issue to back this up. Also great article!