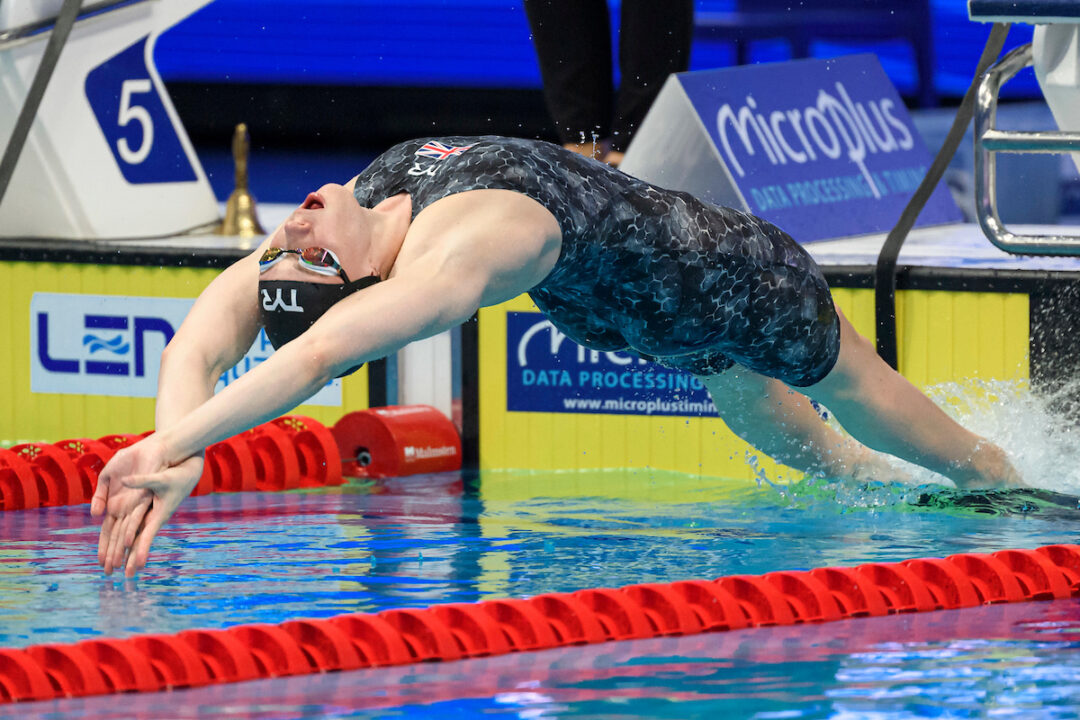 It was a busy week of 100 backstrokes for Great Britain's Kathleen Dawson, including the 5th-fastest swim of all-time at 58.08. Archive photo via Giorgio Perottino / Deepbluemedia / Insidefoto

This week at Canadian Olympic Trials, Oleksiak crushed a 52.89 100 free, setting up for an Olympic gold defense with the #4 time in the world this year.

The 23-year-old Dawson swam the 100 back six different times at the 2021 European Championships, including a stellar run of three swims on the same day between the 100 back prelims and semifinals and the mixed medley relay final. Dawson hit 58.4 twice in those three swims. Later, in the 100 back final, Dawson crushed a 58.18… but that race was officially voided due to errors with the timing system. That forced a fifth swim in a rescheduled final, where Dawson went 58.4 yet again, only about two hours after her original final swim.

When Dawson finally got a chance to swim just one single 100 back in a session, she responded with a new European-record 58.08 – the fifth-fastest swim in history:

Here’s a chronological look at her 100 back swims at Euros:

Dawson won gold medals in all three of the events above. In the 100 back, she won the original final by nearly a full second, and the re-swum final by more than half a second. In the women’s medley, Dawson outswam all other competitors by a whopping 1.4 seconds, staking her team to a massive lead. (Great Britain would win the relay by 2.2 seconds over Russia). In the mixed medley, Dawson beat all other women’s leadoff legs by more than a full second, and Great Britain won the relay by 2.4 seconds.

Dawson’s huge swim complicates an already-crowded backstroke field heading into this summer’s Olympics. The world record has fallen three separate times in this Olympic cycle to three separate swimmers. Dawson’s swim means that one of those three recent world record-setters may very well miss the Olympic podium in the event. Canada’s Kylie Masse set the world record at 58.10 back in 2017. Then in 2018, Kathleen Baker of the U.S. went 58.00 to break it. And in 2019, American Regan Smith crushed both times in 57.57.

Dawson has now passed Masse in the all-time rankings. She trails only Smith, Baker, and Australia’s rising star Kaylee McKeown: