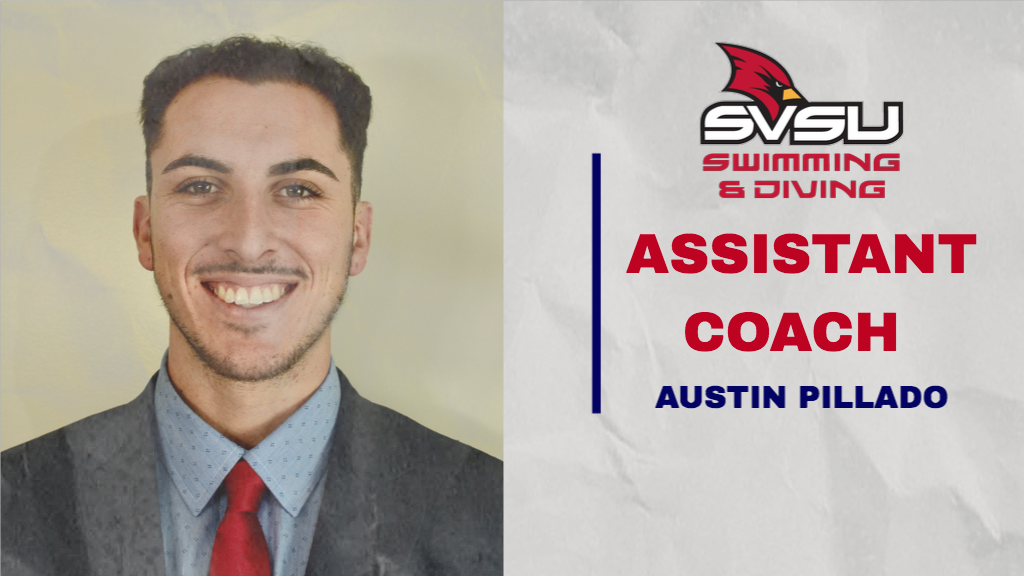 Pillado comes to SVSU from Texas A&M, where he served as a volunteer assistant coach for the Women's team for the past three seasons. Current photo via SVSU Athletics

UNIVERSITY CENTER — SVSU Swimming & Diving Head Coach Jason Lintjer has announced the addition of Austin Pillado as the program’s new assistant coach. Pillado comes to SVSU from Texas A&M, where he served as a volunteer assistant coach for the Women’s team for the past three seasons.

“Austin comes to SVSU with a wealth of knowledge and amazing experience,” said Lintjer. “He was able to work with some of the best athletes in the world at Texas A&M. We’re happy to have him at SVSU.”

While at Texas A&M, Pillado helped guide the team to a pair of SEC Championships in 2018 and 2019 and a third-place team finish at the 2018 NCAA Division I Championships. There were eight school records broken during his time there and 11 conference champions, with two of those being relay teams. There were 33 All-Americans and the Aggies had four swimmers in the top-eight of the 200 breaststroke at the 2018 NCAA Championships. Pillado coached five Olympians and multiple national team-caliber swimmers during his tenure for the Aggies.

“I am incredibly honored and excited to join the Cardinal family,” added Pillado.  ‘The student-athletes, coaching staff and athletic department are extremely driven and I can’t wait to be a part of that positive atmosphere.”

Along with his time coaching collegiately, Pillado has experience working as a swim camp coach and counselor across the country for the past five years.

Pillado competed collegiately at Davis & Elkins College from 2013-17, where he held nine different program records at one point. Of those records, the 400 freestyle relay and 800 freestyle relay ones still stand, along with many pool records he posted. Austin was the first and only swimmer in school history to achieve all-conference honors at the Bluegrass Mountain Championships in 2016 for this performance in the 1,000 yard freestyle. He was named the Male Athlete of the Year in 2016 and was an Academic All-American every semester as a student-athlete. Pillado competed in track & field for the Senators in 2017 as well and still holds the school record in the javelin, an event where he was a GMAC finalist.

What school is SVSU?

Glad I wasn’t the only one — and the article never says the full name! It’s a D-2 school in Michigan

Thank you for your research