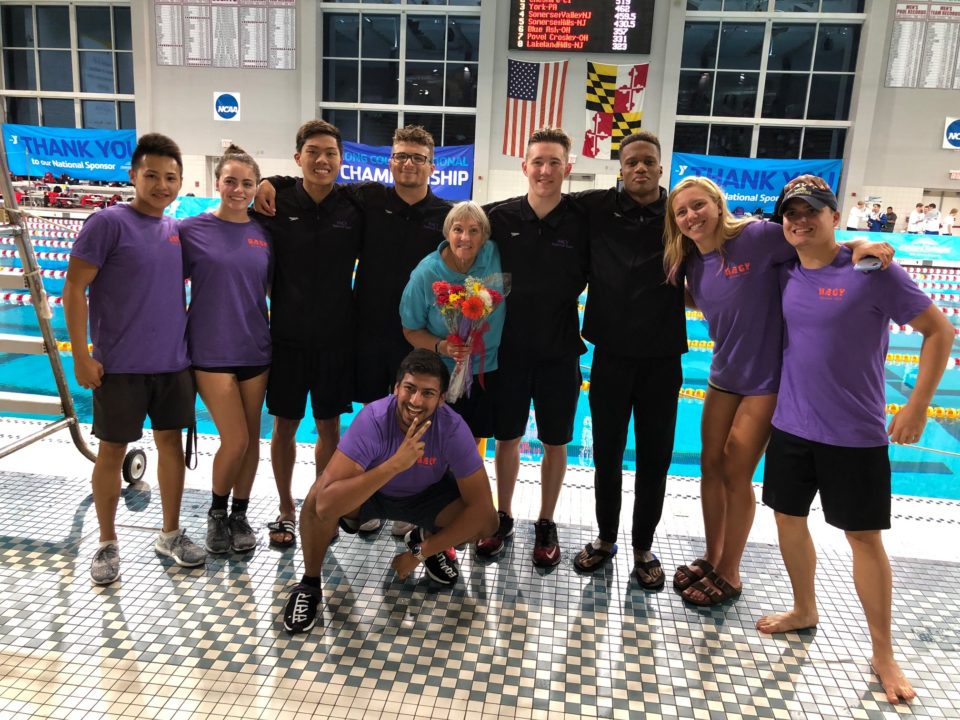 Welsh has coached the Hamilton Area YMCA team for 38 years, building a successful program while also developing athletes with skills in and out of the pool. Archive photo via Sue Welsh

On day three of the 2021 U.S. Olympic Trials, there will be three semi-finals and FOUR finals (where swimmers will fight for Olympic nominations).

Hamilton Area YMCA’s Sue Welsh is the 2020 YMCA Swimming Coach of the Year, as announced by the organization on Tuesday.

The award, sponsored by SwimOutlet, is presented annually to the coach who best exemplifies the approach of developing young athletes cognitively, physically and social-emotionally, while also strengthening the foundation of his or her community.

Welsh has coached for the Hamilton Area YMCA Swim Team, located in Hamilton Township, N.J., for the past 37 years and counting, helping to build a successful program along with leading her athletes to success at all levels. From learn to swim programs to competing at the Olympic Trials, Welsh has coached high school, state and national champions during her tenure.

“To be nominated by my coaches and parents is a spectacular feeling,” Welsh told SwimSwam. “Being the recipient of this prestigious award is truly an honor.

“Reflecting back on 37 years coaching the Hamilton Y swim team, it brings me great joy to know that so many of our swimmers were influenced by our program.”

Welsh was notified about the award on a Zoom call Monday, receiving a presentation from Jack Caucino, President of the YMCA Swim Coaches Association.

“While she has certainly guided her swimmers and teams to athletic success, it is Sue’s holistic approach to coaching that has earned her the respect and appreciation of so many,” the YMCA wrote in its official announcement. “Swimmers, parents and fellow coaches reflect that this is what makes her truly stand out.

“Firmly committed to the YMCA’s core values of Honesty, Caring, Respect and Responsibility, Sue celebrates teamwork and selflessness as much as best times. She has built an inclusive and supportive team culture that is a hallmark of the program.”

Throughout her career, Welsh has earned respect and admiration from the entire swimming community, including parents and her fellow coaches.

“Sue focuses on maturing the swimmer as a whole person; she does not just concentrate on a swimmer’s athletic abilities,” one parent told the YMCA.

Another said: “She always takes the time to listen [to parents] with an open mind and she offers suggestions when needed.”

“She treats all around her, whether it be athlete, coach, parent or sibling with the utmost respect, compassion and humility,” one coach told the YMCA.

Welsh credits the YMCA community with making her job a rewarding experience.

“I am thankful for being part of the Y,” she said. “The relationships with swimmers and coaches, the amazing volunteers that work the deck at all level meets, and being on the pool deck at championship meets feeling the indescribable energy and excitement, reassures me that I chose the right path in my life.”

Congratulations, Sue! We are still grateful to you for overseeing Cole while he competed at Winter Juniors without a coach – you are a true teacher. Well-deserved honor!

Congradulations Sue! Loved seeing your name pop up on this site, well deserved! You had a very positive impact on my life and were a great role model