Stubblety-Cook Gets Under 1:00 In 100 Breast For First Time Ever 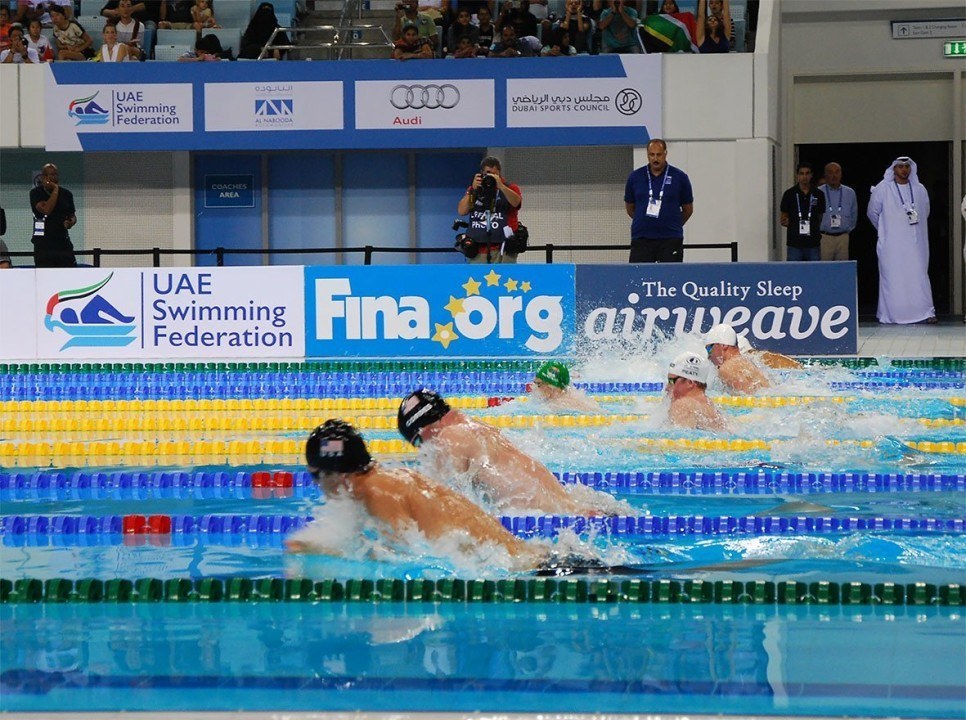 In addition to 15-year-old Elizabeth Dekkers‘ eye-popping swim in the women’s aged 15-years-old 200m fly race, there were several other notable swims that kept the crowd on its feet at Brisbane Aquatic Center during tonight’s Queensland Championships action.

Already breaking out with a huge PB in the men’s 200m breast last night to become the world’s 7th fastest performer ever in the event, Zac Stubblety-Cook kept his best time streak alive by taking the 100m breast this evening. After producing a casual morning effort of 1:01.96 to claim the 2nd seed behind leader Jake Packard‘s 1:00.90, 20-year-old Stubblety-Cook found an entirely new gear to get to the wall first in the final.

Stubblety-Cook stopped the clock in a time of 59.83 to not only grab the gold, but also check-in with the very first sub-minute outing of his career. Entering this meet, the Chandler swimmer’s personal best rested at the 1:00.20 he put up both at the 2018 Pan Pacific Championships and the matched at this year’s Australian Nationa Championships.

Tonight, splitting 28.58/31.25, Stubblety-Cook pushed through a huge barrier to help pave the way for perhaps even quicker performances to come just in time for the 2020 Olympic Games qualification.

Kiah Melverton doubled up on her 200m free victory from last night with another gold tonight in the women’s 400m free. She earned a winning effort of 4:07.12 to get ahead of open water Tokyo Olympics qualifier Kareena Lee, who touched in 4:09.56. For Melverton, her result this evening represents the 4th fastest time of her career, one which boasts a PB of 4:05.30 in this event.

Two Japanese teenagers also made some waves in the 400m free, with 19-year-old Waka Kobori getting it done for bronze in a time of 4:09.61. Kobori was the 800m/1500m free double gold medalist at this year’s World Univerity Games in Naples.

17-year-old Miyu Namba missed the podium tonight but logged a solid 4:09.62 to finish 4th in this women’s 400m free. She earned silver in the 800m free at the 2019 World Junior Championships in Budapest.

Fellow Japanese teammate and World Championships medalist Yui Ohashi followed up her 400m IM victory from last night with a 100m fly gold this evening. Splitting 28.09/30.49, Ohashi sneaked into the wall in 58.58, only .01 ahead of runner-up Kim Seoyeong of Korea. Seoyeong fired off a 27.65 opener, but couldn’t match Ohashi’s back-end speed, ultimately finishing in 58.59.

Taking down a Queensland All Comers Record in the women’s 100m free for 15-year-olds was Mollie O’Callaghan. The St. Peters Western dynamo threw down a winning 100m free mark of 54.77, overtaking Shayna Jack’s previous QLD mark of 54.80 that’s been on the books since 2013.

Entering this meet, O’Callaghan had only been under the 55-second in this 100m free on one occasion, represented by the 54.84 she produced at the 2019 World Junior Championships where she finished in 4th place.

Splitting 26.51/28.26 tonight, however, O’Callaghan’s time is not only a new lifetime best, but it’s getting closer to the 54.30 age group record held by Olympic gold medalist Cate Campbell. Her time also outperformed the women’s open 100m free final, which saw Meg Harris stand atop the podium at 55.30. Harris, just 17, earned bronze at World Juniors in a time of there in Budapest of 54.58.

Of note, Kaylee McKeown took the B-Final of the women’s 100m free in a time of 55.93, a mark which would have place 4th in the A-Final this evening.

Japan’s Reona Aoki produced the fastest women’s 100m breaststroke outing tonight, registering a time of 1:06.99 to grab the gold. Her teammate Katsumi Nakamura scored the only sub-49-second 100m free time of the night for the men, reaping gold in 48.98.

Good swim,for a 200 specialist, hope he can get much faster at trials, maybe he and Wilson can crack 59secs!

Almost same time she swam in the Rio final