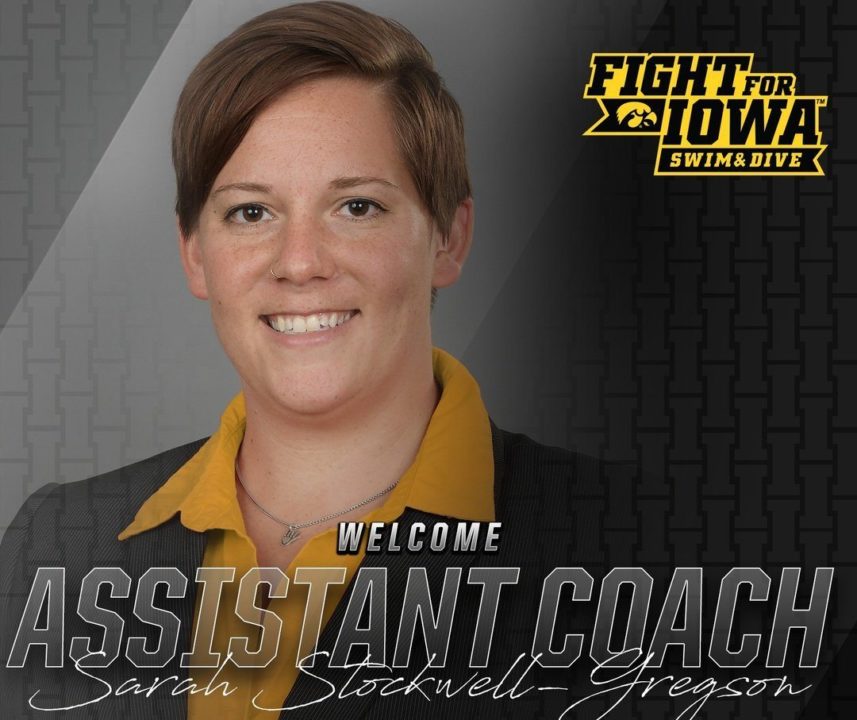 Sarah Stockwell-Gregson has been named an assistant coach with the University of Iowa swimming and diving program after seven years at Virginia Tech. Current photo via Iowa Athletics

IOWA CITY, Iowa — Sarah Stockwell-Gregson has been named an assistant coach with the University of Iowa swimming and diving program, it was announced Thursday by head coach Marc Long.

“We are thrilled to have Sarah joining the Hawkeye swimming and diving family,” said Long. “She is an experienced and proven winner as an athlete and coach. She will have an immediate and positive impact with the Iowa program.”

Stockwell-Gregson joins the Hawkeyes following a seven-year stint at Virginia Tech, where she was the program’s top assistant from 2015-18 and interim head coach in 2018. She joined the Hokies in 2011 as an assistant coach.

“I am excited to be a part of such a great staff and program,” said Stockwell-Gregson. “Right away I felt welcomed and at home when I first visited and I knew that Iowa City is a special place.

“I want to thank Marc and everyone at the university for giving me this opportunity. Returning to the Big Ten has been a goal of mine and to be able to do it with such a great group of coaches and swimmers is amazing. I believe the future of Hawkeye swimming and diving is bright, and I am honored to be a part of that future.”

While in Blacksburg, Stockwell-Gregson helped the men’s and women’s programs post 11 top-five team finishes at the ACC Championships and nine top-25 showings at the NCAA Championships. She coached 46 All-America or honorable mention All-America honorees, 16 ACC champions, and an ACC Swimmer of the Meet.

In 2013, Virginia Tech claimed its first ACC championship, taking home the men’s team title. It came on the heels of back-to-back ACC runner-up finishes in 2011 and 2012.  The Hokie women earned conference runner-up honors in 2012 after winning five titles at the championships. In 2016, Stockwell-Gregson coached 16 Olympic Trials qualifiers, including one U.S. National Team member.

Stockwell-Gregson began her career as a graduate assistant in Indiana’s strength and conditioning program, where she helped the Hoosiers swimming and diving team claim a 2010 Big Ten title.  The following season, Stockwell-Gregson made the move to the Indiana coaching staff as a volunteer assistant, helping the team to a Big Ten title and top 15 finish at the NCAA Championships.

As a student-athlete, Stockwell-Gregson was an eight-time All-American at Indiana from 2007-09, helping the Hoosiers to two Big Ten Championships (2007, 2009).  She finished her career as the school record holder in the 100 and 200 breast and as part of the 200 and 400-medley relays.

Stockwell-Gregson was a two-time team captain and a 2008 Olympic Trials qualifier.

Stockwell-Gregson graduated from Indiana with a degree in recreation sports management in 2009 and she earned her master’s degree in kinesiology in 2011.  She is a member of USA Swimming (coaches) and the College Swimming Coaches Association of America.

Perfect hire. Iowa is so lucky to have her!

Great coach and better person! Will make the program better overall. Hopefully she brings some new energy to that pool deck!

Hype is real at the moment!

Sarah will be a great addition to Iowa – her swimmers at VT were always getting better.