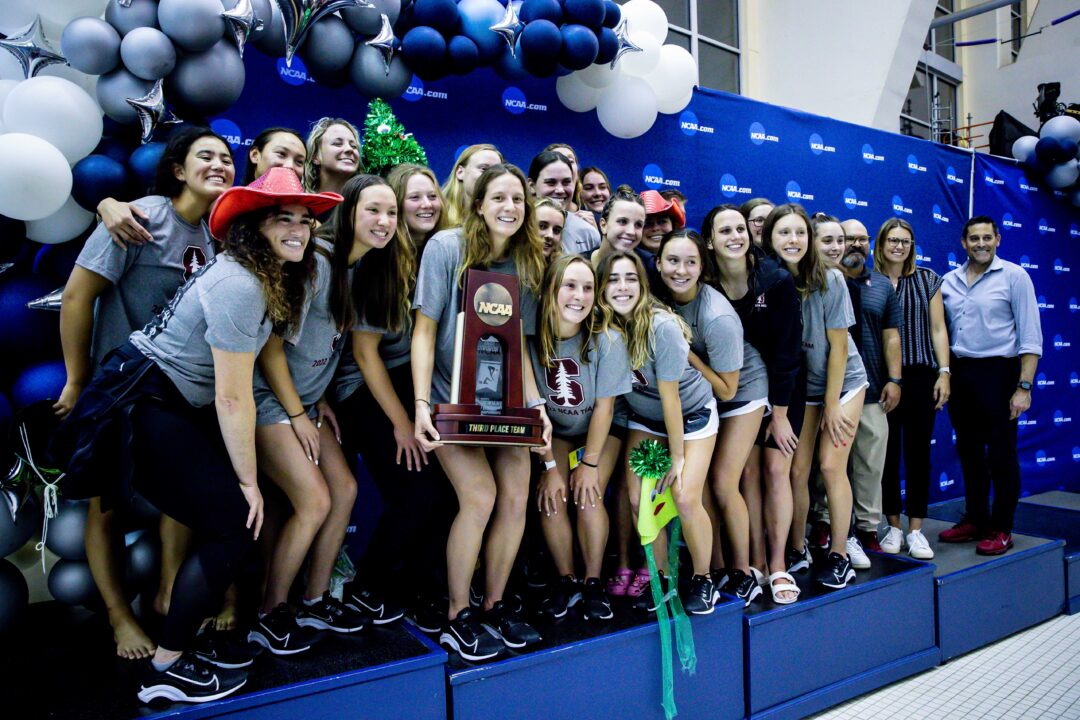 To qualify, teams must have a minimum of a 3.0 team GPA for the previous semester.

The list includes 731 teams from 441 institutions – an increase from the 721 programs from 424 institutions that earned the honor last year.

The highest team GPA’s come from Division III programs. Caltech men and the Pacific Lutheran women are the top overall programs, both achieving a 3.85 team GPA.

From the top 10 of NCAA Division I, the most-competitive level, of Division I swimming, most teams made the list. That includes the entire top 10 of the women’s NCAA Championship meet.

Eight out of the top 10 teams at the men’s NCAA Division I Championships also earned All-America status.

Other high-flying teams in and out of the pool include the NCAA Division II Champions from Queens which made the list in both the men’s (3.50 GPA) and women’s (3.66 GPA) categories.

The full lists are below:

Harvard and Stanford have such extreme grade inflation. Princeton/MIT/NESCAC schools… those are places where you actually have to work hard

when Dean Farris gets a GPA of 8.0, it tends to help the overall team GPA

Of course Stanford and Harvard are at the top. Both of these schools let students drop a class 8 weeks into the semester without a notation on their transcript. Two weeks is the standard for most other universities… GPAs are not equal from one institution to another and they should not be ranked against each other.

My university allowed you to drop a class through the 60th class day of a fall or spring semester. That’s about 8 weeks.

Looks like you went to Texas A&M so I looked into it out of curiosity. They are actually more restrictive than most. The last day to drop without a notation on the transcript this Fall is one week after the semester starts. A student can drop up until Nov 18th but it will show up as a “W” (previously “Q”) on the the transcript. They also limit every student to six drops with a “W” for their entire academic career… This topic has always been a curiosity for me because I had friends swimming at both Stanford and Harvard while the rest of our group swam at state schools. The Stanford and Harvard guys took advantage of this drop opportunity… Read more »

Harvard really the odd one out there

This is not fair. Education is easier at Stanford and Harvard…

😂 have you attended either one of the schools?

this is incredible! Thanks for sharing! Certainly something to keep in mind for our 2024 grad! #iolaniswimclub

Some majors are very hard, others not so much. Without adjustment for degree-of-difficulty, these figures shouldn’t be given too much weight.

It’s my understanding that the schools are doing this without the aid of mandatory study halls since Covid started. The student-athletes are doing it on their own or by studying with groups in their classes.