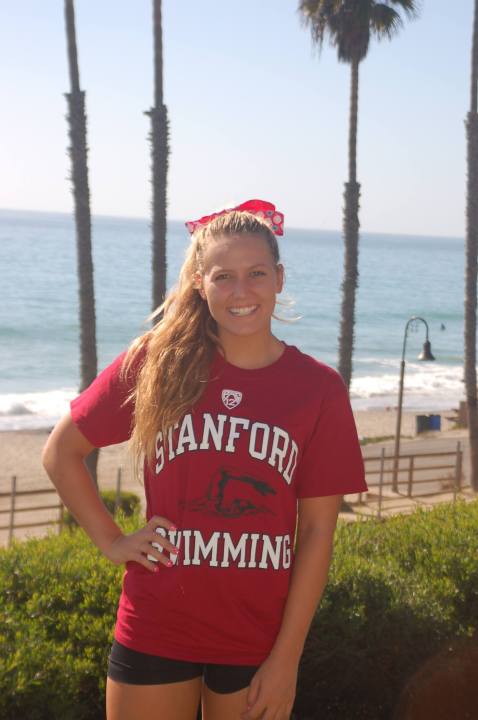 Kaitlyn Albertoli has thrown her hat into the Stanford ring, giving her verbal commitment to swim with The Cardinal for the 2015-16 season.

“I am so thrilled to join this incredible group of girls and awesome coaches as a part of the Cardinal family! I feel very blessed for the opportunity to attend such a great university!”

Stanford women won four out of the five relays at NCAAs in 2014; the only one that eluded them was the 4×200 free. Three of the four sprint freestylers on Stanford’s winning 200 free and 400 free relays will have graduated by the time this high school class of 2015 steps foot on campus. It would seem that Greg Meehan is ensuring the succession plan for his double-point relays: Simone Manuel, Janet Hu, Lindsey Engel, and Ally Howe are all freshmen on The Farm. And now he’s bringing in the next generation of sprinters.

Albertoli, who trains with San Clemente Aquatic Team, is a 2012 and 2016 Olympic Trials qualifier. Her 25.88 in the 50m free from 2014 Nationals puts her 43rd among all American women this season. In 2013 Albertoli was a US Open semifinalist.

Her top events are:

Albertoli is a senior at JSerra Catholic High School in San Juan Capistrano. At California’s CIF-Southern Section Division 1 Championships this past May, she finished second in both the 50 and 100 free. Just her luck that the winner of each event set two National Public High School Records in the process: Abbey Weitzeil. That said, both her 22.84 second-place 50 free and her 49.90 second-place 100 free were her second best times ever. (She finished the meet with a new PB in the 100 free, 49.82, leading off JSerra’s 400 free relay.) At the 2013 CIF-SS D1 meet, Albertoli led off (50.39) the JSerra 400 free relay that set the national independent school record with 3:21.20.

Albertoli was a member of USA Swimming’s 2013-14 National Junior Team. She joins a Stanford class of 2019 that already includes Katie Ledecky and Ella Eastin.

is it just me… or is it going to be unfair for the rest of NCAA against Stanford. team wise, obviously missy and other individuals will do fine.

Yeah…it feels like Stanford is going to be leaving an All-American off of their NCAA roster at some point in the not-too-distant future.

Then again, just piling as much talent as possible into one team doesn’t always work, even in individual sports.

mcmflyguy – ha. That’s like a long distance relationship though. Everyone gets along when they see each other 10 times a year. Distance makes the heart grow fonder. Give them all 6 months in the same pool at the same time with the same coaches…things WILL get ugly.

MCMFLYGUY, the last time we wrote an article with those types of sentiments, it was this one (from yours truly):

… we all know how that turned out.

In other words… “on paper” means nothing.

we all know that. on paper USA never should have beaten france in the 4 free relay but lezak said screw that. Im not saying Stanford is a lock 100%, sure anything can happen, but I guess what I really poorly pointed out is that Stanford is killing it with recruiting. and next year they will be hard to beat

Congratulations Kaitlyn!!!!! Wow, first Brittany Kahn commits to Duke and now you to Stanford , JSerra must be so proud of you both!!! The both of you are outstanding fine young ladies . The best wishes goes out to you and your parents. Go Cardinals!!!!!!

I think Cal has as many talents as Stanford, if not, better. It will come down to how the coaching staff can get their athletes to perform well. Greg Meehan has proven that. His swimmers are getting better under his tutorage.

In addition, getting a free ride to Stanford isn’t bad at all with the education ones will get, that’s worth a lifetime.

I think cal has one of the most legit shots at beating Stanford at NCAAs.