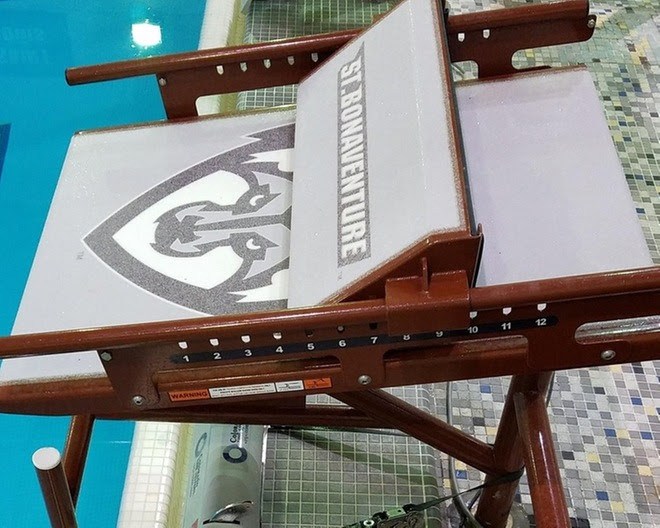 St. Bonaventure men’s swimming and diving team will add a pair of breaststrokers to the roster in 2018-19: Matt Stanley... Stock photo via St. Bonaventure Athletics

St. Bonaventure men’s swimming and diving team will add a pair of breaststrokers to the roster in 2018-19: Matt Stanley from Carolina, Rhode Island and Hylton Collinson from Johannesburg, South Africa. Both are strong breaststrokers, and will fill the hole left by the graduation in 2017 of seniors Preston Schilling and Matt Goettler, who finished 2nd and 3rd in the 100 breast and 3rd and 4th in the 200 breast at 2017 Atlantic-10 Championships. Schilling and Goettler were the only breaststroke scorers for the Bonnies and their departure erases key points in St. Bonaventure’s quest to catch George Mason (St. Bonaventure trailed by 3 points in 2017), St. Louis (by 10 points), and Fordham (by 15.5 points) in the A-10 standings.

“I chose St. Bonaventure because I immediately felt welcomed by the coaching staff and team members. Being part of such a close knit family atmosphere is very important to me, and this school offers just that. I feel as though I will be able to grow as both an athlete and a student with the incredible support from everyone. I’m extremely thankful for the coaching staff and everyone else who has helped me through this process and I look forward to being a part of the team for the next four years! Go Bonnies!”

Stanley is a two-time USA Swimming Scholastic All-American from Chariho High School in Richmond, Rhode Island. He won the 100 breast at the RI Interscholastic League Boys State Championship Swim Meet both as a sophomore (57.18) and as a junior (56.27); he was runner-up in the 200 IM in 2017 (1:53.69). Stanley swims year-round for Crimson Aquatics.

“I am thrilled to announce that I will be continuing my academic and athletic future at St Bonaventure University. Coach Sean’s passion as well as his supportive teammates was a major factor in me choosing St Bonaventure. Can’t wait to join them in August 2018….Go Bonnies.”