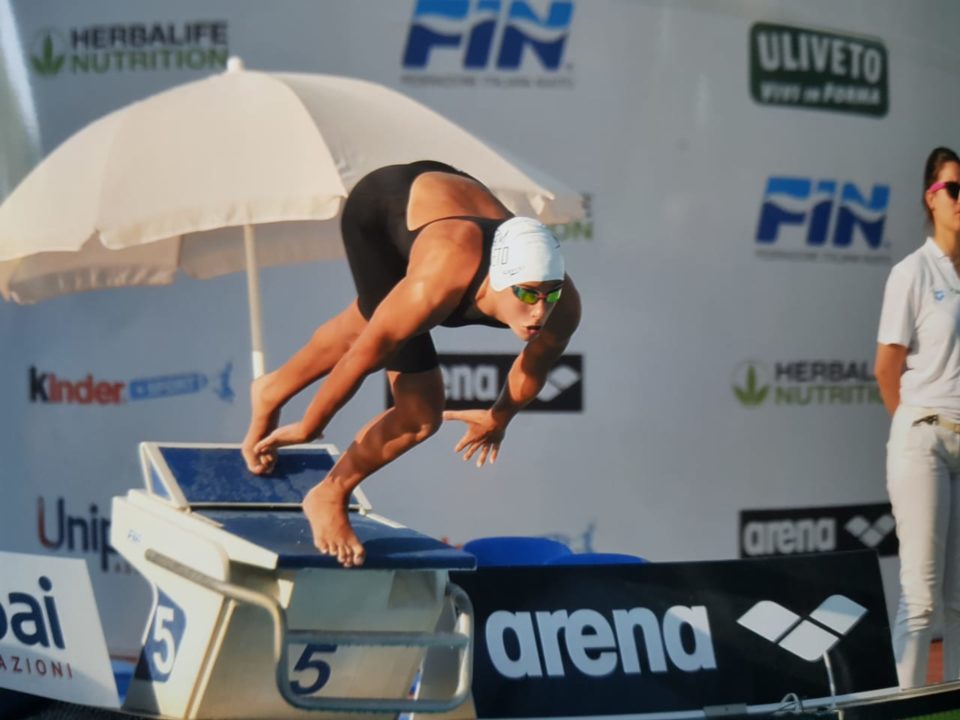 Nocentini, the Northwestern record holder in the 50 free, experimented with breaststroke events in her team's season opener and had some formidable results. Archive photo via Jasmine Nocentini

Northwestern vs. UIC vs. Illinois

Notably, the head coaches of all three teams competing were women, a fact that is significant considering that collegiate swim coaching is a sphere that is predominantly male. Northwestern is led by Katie Robinson, Illinois by Jeana Kempe, and UIC by Ashley Dell. What’s also interesting about this combination of female coaches is that both Kempe and Dell were newly hired, as Kempe was named head coach in April 2022 and Dell was named head coach in May 2022.

We swam against two other programs today – and all HEAD COACHES on deck were WOMEN.
🤙🥳🤝 #shecancoach #RepresentationMatters pic.twitter.com/vpz18LBx70

The most intriguing story about this meet was Jasmine Nocentini. She was named in our list of NCAA swimmers who could break out in the 2022-23 season, but that was primarily for her sprint freestyle abilities—which makes sense considering that she’s been as fast as 21.78 and 47.76 respectively in the 50 and 100 free and is the school record holder in the former event. At this meet, however, she tested her hand in another event discipline—breaststroke.

Nocentini started things off by swimming breast on the 200 medley relay, where she split a formidable time of 26.86 that had only been matched by a few of the nation’s top breaststroke specialists such as Kaelyn Gridley, Kaitlyn Dobler, Lydia Jacoby, and Anna Elendt, much less at an unsuited dual meet. The aforementioned 200 medley relay consisted of Isabella Wallace (27.33), Nocentini (26.82), Jamie Brennan (24.25), and Ally Larson (22.58) who combined for a time of 1:40.98.

Individually, Nocentini swam the 100 breast for the first time in her career, where she won in a time of 1:00.34. That time is less than a second off of last year’s NCAA invite time of 59.87. Adding the 100 breast as a third event in Nocetini’s lineup could be very beneficial towards Northwestern, especially after the departures of Sophie Angus and Tara Vovk, last year’s seventh and eighth-place finishers at NCAAs in the 100 breast. But Nocetini didn’t abandon the sprint freestyle races entirely this meet, as she also won the 100 free, swimming a 49.32. Later in the competition, she led off the 400 free relay nearly half a second fast in 48.82, as her, Lindsay Ervin (50.38), Miriam Guevara (52.46), and Wallace (53.22) combined to win in a time of 3:24.88.

Ervin, a freshman, finished second to Nocetini in a time of 49.94 and was not far off her best time of 49.48 set this April. She also won the 50 free in 23.41, just 0.14 seconds ahead of her teammate Audrey Yu, who is also a freshman coming from the Sandpipers of Nevada.

On the distance side of things, it was 2022 NCAA All-American Lola Mull who shined. She won the 1000 free (10:04.64) and 500 free (4:56.26), although she wasn’t the fastest swimmer in the 500. In that same race, freshman Hana Shimizu-Bowers was nearly a second fast than Mull to go 4:55.35, but she was marked as an exhibition swimmer. Also swimming exhibition in the 500 free was Ashley Strouse, who clocked a 4:56.48 that was the third-fastest time in the heat. Strouse, who endured a freshman year plagued with injuries, was racing in her first yards meet since undergoing elbow surgery in April 2022.

While Nocetini showed out in sprint breast, the rest of Northwestern’s breaststrokers performed well too. This was displayed when Hannah Brunzell took the 200 breast in a time of 2:16.71, beating out her competition by nearly five seconds. The top performers for Illinois at this meet were Sarah Jass and Liv Dorshorst, as Jass took second in the 200 breast (2:21.31) and 200 IM (2:06.02) and Dorhorst nabbed official second-place finishes in the 500 free (4:57.83) and 1000 free (10:11.21). UIC’s Ciara McCliment scored the only non-Northwestern event win on the women’s side, scoring 267.70 points to win the three-meter diving event. The one-meter diver was won by Northwestern’s Markie Hopkins, who scored 277.90 points.

The Northwestern men were without their most high-profile swimmer, Olympic bronze medalist Federico Burdisso, or his brother, Alessandro Burdisso. However, they still managed to beat UIC handily. The Wildcats were led by Ryan King, Tyler Lu, and Tona Zinn, who each grabbed two wins apiece.

The other “best of the rest” freshman that raced this meet was Matthew Lucky, who took third in the 100 breast with a 56.39 and third in the 200 IM with a 1:55.32 (although he raced exhibition here). He also competed in the 200 breast but was DQed. Saturday’s competition was Lucky’s first meet since 2022 Junior Pan Pacs in August, where he finished sixth in the 200 breast.

Jan Karolczak, a trasnfer who spent his first two seasons at Virginia, made his Northwestern debut by winning the 200 free. He swam a 1:39.34, being the only swimmer in the field under 1:40. The shorter freestyle events were won by Ethan Churilla and Aleksa Bobar, who went 20.98 and 45.61 to win the 50 and 100 free respectively.  In fact, Bobar and Churilla were only separated by 0.01 seconds in the 100 free, as Churilla touched behind his teammate in 45.62. In the 50 free, Churilla’s winning time was less than a second off his personal best of 20.37.

Just like on the women’s side, the only non-Northwestern winner in the men’s meet was UIC’s Cole Tremewan, who scored 283.80 points to win the one-meter dive. The three-meter dive was won by Northwestern’s Henry Schirmer, who scored 312.70 points.

Neither of the burdisso’s swam this meet. Are they even on campus?

Didn’t Federico swim in the World Cup the same day? Alessandro hasn’t swum in any meet since January

Jasmine can actually swim any stroke she wants