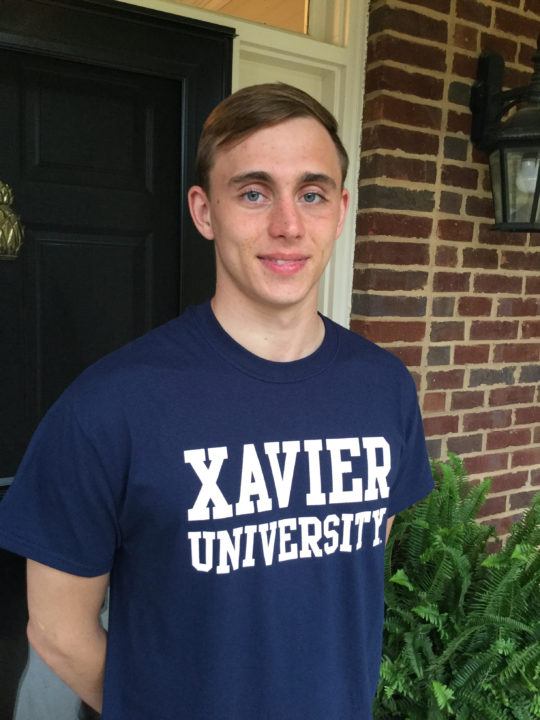 Brian Loos of River Bluff High School and Carolina Aquatics has made a commitment to Xavier University for 2017-18. Current photo via Brian Loos

Lexington, South Carolina’s Brian Loos will swim for Xavier University in Cincinnati, Ohio, beginning in the fall of 2017.

“Xavier was the perfect fit for me. Great academics, beautiful campus and an awesome team.”

Loos was the captain and MVP of the men’s team at River Bluff High School. At the 2016 South Carolina High School League 5A Championships last October, Loos won the state title in the 100 breast and was runner-up in the 100 fly. He also swam the breast leg on RBHS’ third-place medley relay and was a member of their runner-up 200 free relay. He was crowned Midlands Boys Swimmer of Year by The State newspaper, and was named to the SCHSL 5A All-State Team for the 100 breast and 100 fly.

Loos swims year-round for the club team Carolina Aquatics. He was state champion in both the 100 breast and 200 breast at the 2017 South Carolina Short Course State Championships, and then went on to go best times in both events at Greensboro Sectionals in March.

The Xavier men finished third, a mere 19 points behind Georgetown at the 2017 Big East Championships. Loos would have given the Musketeers a second A finalist in the 100 breast and a fourth in the 200 breast. Loos will join a strong training group, led by rising junior Matthew Dyer who won both distances at the conference meet.