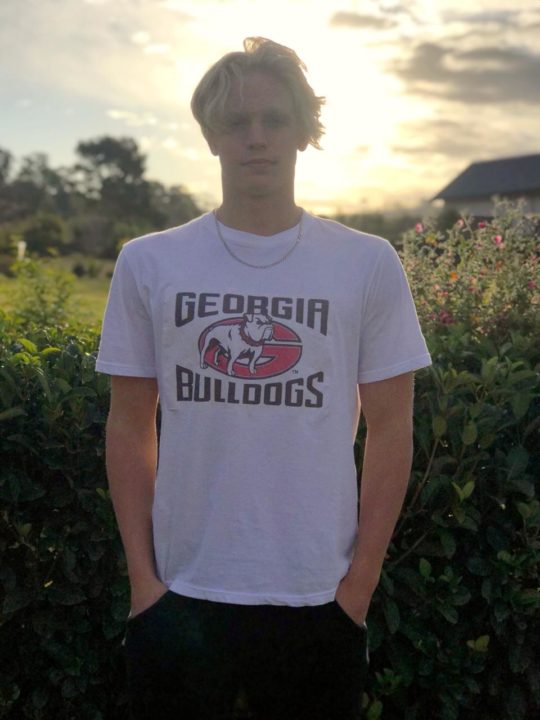 South African swimmer Matt Sates has verbally committed to join the University of Georgia as the member of the high school class of 2022. That makes him Georgia’s first class of 2022 commitment and one of the first nationally.

Sates is the latest in a re-developing South Africa-to-Georgia pipeline that has opened up since the program hired Neil Versfeld, a Bulldog alumnus, as an assistant coach a year ago. Henre Louw and Dune Coetzee have also both committed from South Africa to Georgia since then.

Sates says that both head coach Jack Bauerle and Versfeld were instrumental in his decision to choose Georgia.

“Coach Neil is an ex-South African and was coached by my current coach, Wayne Riddin at my current club in Pietermaritzburg, Seals Swimming Club,” Sates said of his connection to Versfeld. “Neil started with Wayne Riddin, as I did as an age group swimmer. Neil went on to qualify for the Olympics in 2008. Neil understands our programme, my passion and ‘where I come from.’ I am excited about what the future holds for all of us at UGA.”

Like Versfeld, Sates is a very good breaststroker – but he brings a ton of other event potentials to Athens, including the IM races. In August of 2019, he won South African Short Course National Championships in the 200 breast, 200 IM, and 400 IM, and had a number of other individual top 5 finishes – including finishing as the runner-up in the 100 fly.

To this point of his career, Sates has been as good in short course as he has in long course, which gives high hopes for his transition to the NCAA yards system.

Georgia finished 3rd at last year’s SEC Championship meet, just 22 points behind runners-up Texas A&M for 2nd. The program has a strong history of producing depth over 200 yard and IM races, and that’s likely where Sates will be heading when he arrives in Athens.

If you have a commitment to report, please send an email with a photo (landscape, or horizontal, looks best) and a quote to [email protected]m.

Oh wow – this dude has improved just a bit in the last year.

Go Dawgs! Welcome to UGA Matt. We’re gonna have to do something with that hair! LOL

How can you commit when you haven’t been on campus? You may not even be able to get a chance this next year to visit…

The first time I set foot on campus at Texas A&M, which was only 90 minutes from my house, was when I moved into the dorm my freshman year.

Virtual visits are a thing.

This dude will kill it. Good luck.

Jeez UGA hasn’t had much success with male IMers, hope this one finally works out. All jokes. Congrats mate, you’ll kill it at Georgia.

Talk about an all around swimmer!

Dang UGA they getting all the fast male swimmers. But a great choice Matt – congratulations.