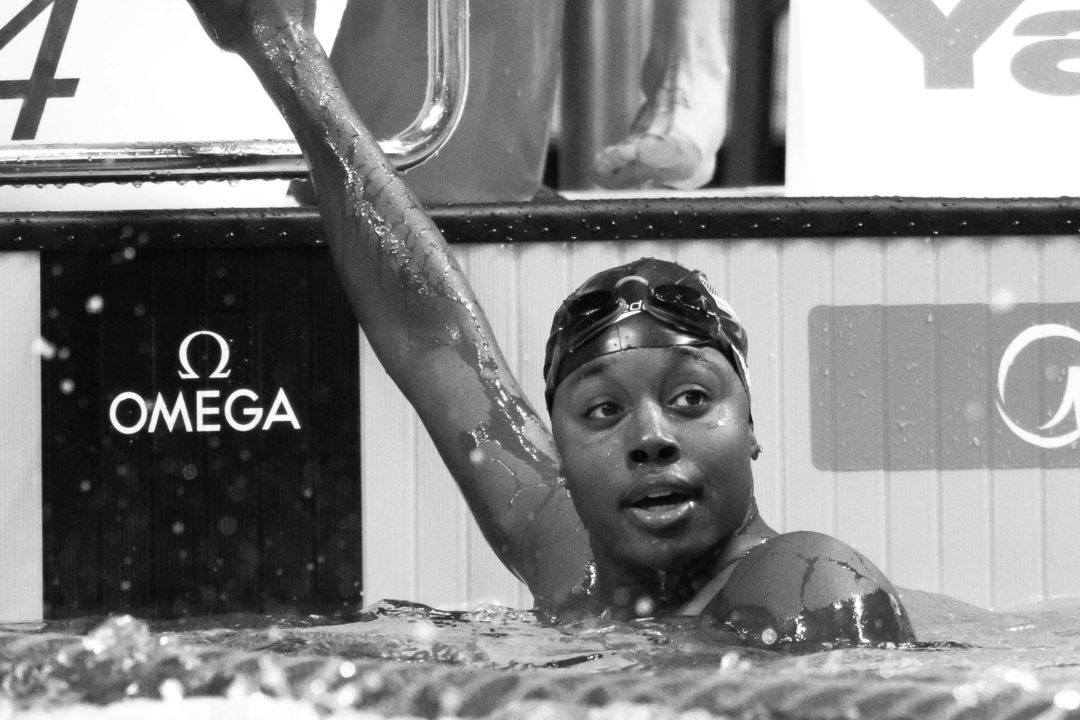 After pulling out of the USA College Challenge with what Stanford termed a "mild injury," Olympic champ Simone Manuel is missing from the official psych sheets for the Art Adamson Invite at Texas A&M this weekend. Archive photo via Mike Lewis/Ola Vista Photography

After pulling out of the USA College Challenge with what Stanford termed a “mild injury,” Olympic champ Simone Manuel is missing from the official psych sheets for the Art Adamson Invite at Texas A&M this weekend.

The meet is typically the major fall semester focus meet for the Cardinal, where many top swimmer notch NCAA qualifying times that allow them to train through the Pac-12 Championships in the late winter. Manuel does not appear in any individual entries, which would leave her without an individual swim yet this collegiate season.

Manuel was originally slated to swim the College Challenge, but withdrew late. We reached out to Stanford at the time and were told that Manuel was “rehabbing from a mild injury” and was “excited to get back to competition soon.”

The Art Adamson Invite is the final meet listed on Stanford’s schedule for the calendar year 2018, which means that unless Manuel adds a meet outside the college schedule (like U.S. Winter Nationals), she may not compete this year until January 19 against Arizona. That leaves her barely more than a month before major postseason action begins at the Pac-12 Championships.

Sophomore distance freestyle All-American Megan Byrnes is also missing from the Art Adamson psych sheets. Byrnes is also out with an injury and hasn’t yet competed this year. While Stanford is a historically good team, losing Manuel is one of the few wrinkles that could throw a repeat NCAA title run into jeopardy for the Cardinal.

You can view the full Art Adamson psych sheets here.

Heard she broke her ankle… per Megan Byrnes

Stanford men aren’t swimming? What a boring meet on the mens side

I guess we will find out on Sunday at the Golden Goggles Awards about Simone’s injury. I don’t get why injuries are so top secret. I wish her a speedy recovery.