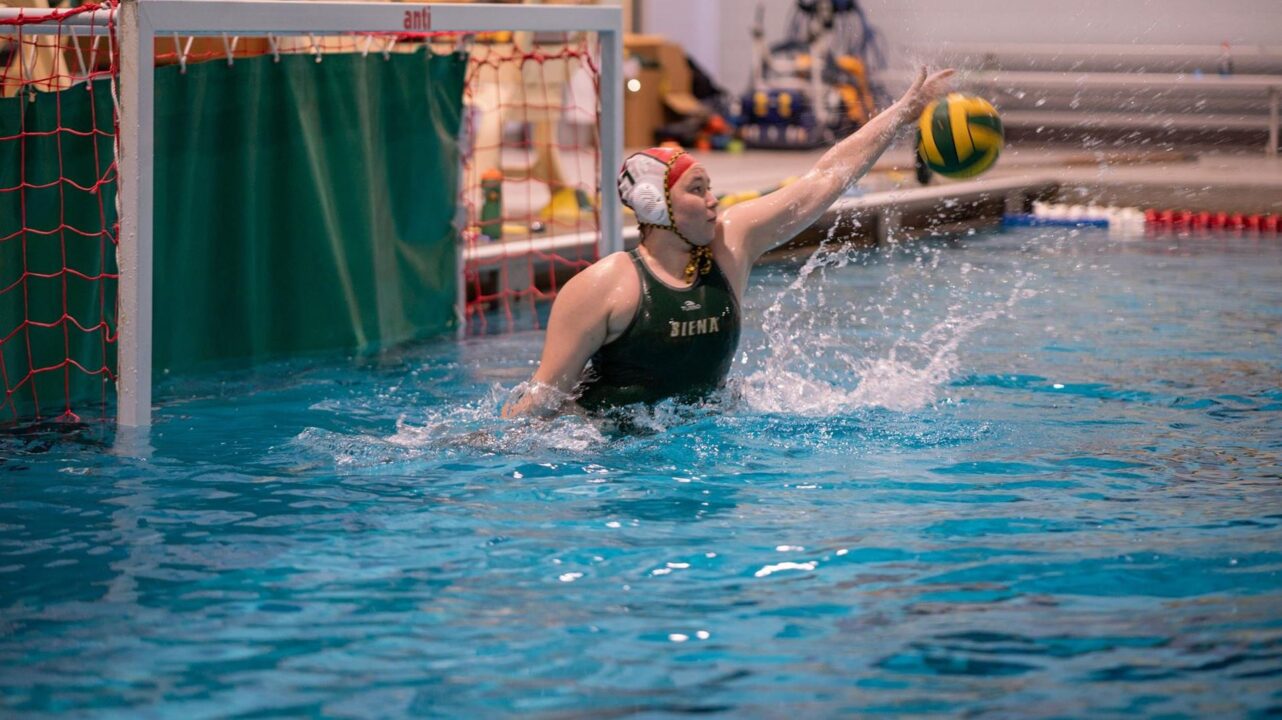 The Saints fell, 21-12, at Villanova in a Sunday morning match before taking a 21-8 loss at #24 La Salle. Archive photo via Siena Athletics

Siena Water Polo (0-5) dropped a pair of MAAC road matches to nationally competitive opponents Sunday in the Philadelphia area. The Saints fell, 21-12, at Villanova in a morning match before taking a 21-8 loss at #24 La Salle.

Continuing a four-match road trip, Siena got off to a quick start in the opening period, jumping out to leads of 2-0 and 3-1. The Wildcats tied the match at three at the 1:26 mark and proceeded to score four unanswered goals to jump out to a 7-3 lead with 5:36 in the second  quarter. Villanova would outscore Siena 8-2 in the second quarter to pull away for good in the match.

Siena’s Georgia Vargas netted a goal with 5:54 to play in the third quarter that trimmed the Villanova lead to 11-6, while senior Kristen Burger was awarded a penalty shot 30 seconds later, but could not convert. The Saints scored with 2:55 in the third quarter to pull within seven and trailed, 15-8, after three quarters, but the home team scored six of the final 10 goals to pull away.

Siena traveled across town to take the pool just five hours later and fell down, 4-1, to the Explorers after a quarter of play. La Salle then outscored the Green and Gold 8-2 in the second quarter to jump out to a 12-3 halftime lead, with Burger and sophomores Grace Boeve and Maggie Verdiujn each netting a goal in the first half of play.

Although the damage had already been done, the Saints attempted to keep pace with La Salle in the second half, with each team netting four goals in the third quarter. The Explorers still held a 16-7 lead after three quarters, however, and outscored the Saints, 5-1, in the final period to secure the win. Vargas led the way with four goals in the loss, while sophomore goalkeeper Anna Mossakowski also found the back of the net while making four saves in-between-the-pipes.

Siena will conclude the 2021 regular season with three of its final four matches at home, taking on Marist to kick off the final week of action on Wednesday, April 21 at 7:00 PM.