Sette Colli finals cancelled due to storm, Hosszu tops Pellegrini in exhibition 200 back 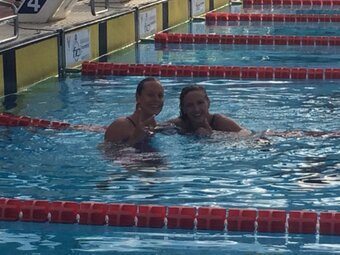 The final day of Italy's Sette Colli meet was abbreviated by a giant rainstorm that swept through the city, cancelling finals with just two events swum. Current photo via Shane Tusup

The final day of Italy’s Sette Colli meet was abbreviated by a giant rainstorm that swept through the city, cancelling finals with just two events swum.

But Katinka Hosszu doesn’t usually let anything get in the way of swimming her full lineup. The Hungarian “Iron Lady” swam a friendly exhibition 200 backstroke race with Italian Olympic champ Federica Pellegrini in lieu of the rained-out final.

Though the event won’t appear to count as any sort of “official” swim, Hosszu put up a time that would have ranked 5th in the world for 2014, a 2:08.35 according to her coach Shane Tusup.

We weren’t able to get a time for Pellegrini, but are told she finished about a body-length behind Hosszu.

A few of the more noteworthy prelims swims:

Dutch sprinter Inge Dekker rocketed to #2 on the 2014 world ranks, taking the top seed in the 50 fly with a 25.50. That launches her just ahead of Sweden’s Sarah Sjostrom and just behind Denmark’s Jeanette Ottesen.

It was also a great morning for the German men. Marco Koch continued to pace breaststroke races, going 2:11.89 for the top seed in the men’s 200 breast. Then in the men’s 200 IM, the Germans swept the top two seeds, with Markus Deibler going 2:02.02 and Philip Heintz following him in at 2:02.07.

Femke is Dutch I believe.