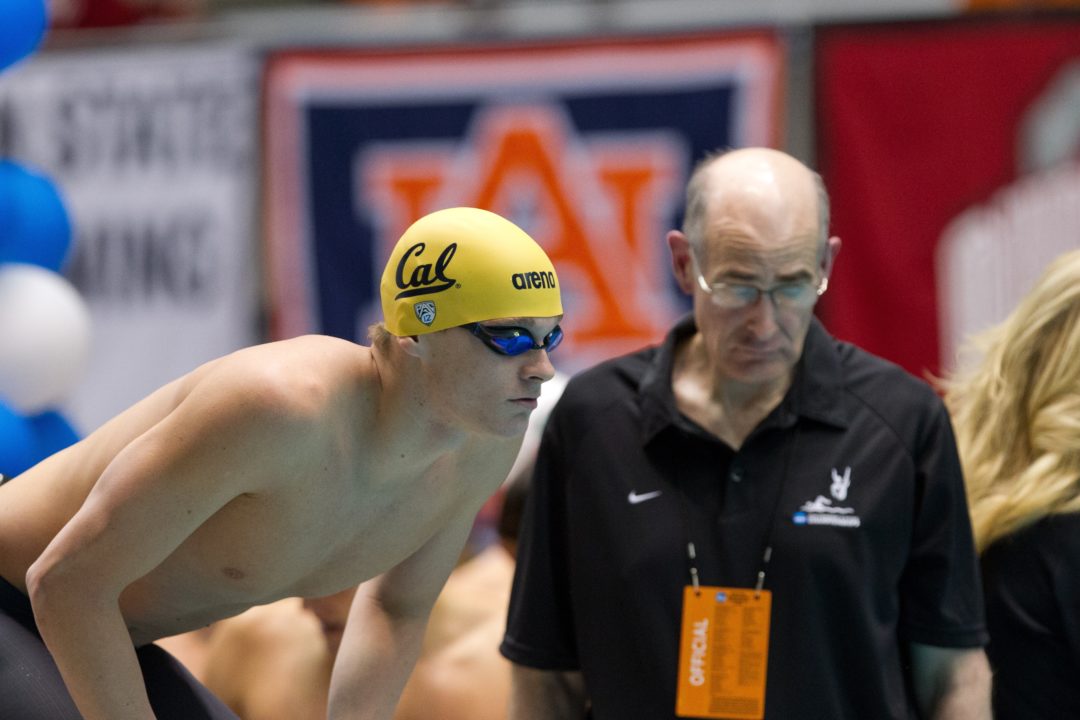 This record is SIGNIFICANT. When Ervin broke the record, you all know what he did a few months later... (Photo Courtesy: ©Tim Binnings/TheSwimPictures.com)

In all of the excitement surrounding how fast Cal swam on day 1 of the 2012 NCAA Men’s Swimming and Diving Championships, one monumental record was lost in the rubble. Cal’s Seth Stubblefield broke the 17-18 National Age Group Record of another Cal Bear: the great Anthony Ervin.

Stubblefield swam a 19.41 in prelims of the individual 50 free, which just snuck under Ervin’s best time of 19.43 that was done in 2000. As evidence of how far sprinting has come since then, Ervin actually won the NCAA Title and the Olympic gold medal that same year, when he was only a freshman at Cal.

In what has since become a race for the older and stronger, Stubblefield and his Cal teammates are bringing youth back into fashion in the sprints. He finished 5th in the final in 19.57, and his teammate Tyler Messerschmidt finished 9th in 19.45, which made them the only two freshman in the top 30 of this race. You actually have to go all the way down to 39th-place and Louisville’s Caryle Blondell to find a non-Cal freshman in the standings.

Stubblefield made headlines last year when he made the controversial decision to skip his senior year of high school and focus on club swimming (which is becoming more-and-more popular). It looks from this result as though that was exactly the right decision for him to make.

While Stubblefield is a great lcm swimmer, I doubt the same drops will translate directly to his lcm swimming but from what I saw, a lot of his improvement came from better underwaters/turns, unlike Ervin, who still lacks an underwater, so I’m guessing no sub-22 this summer.

You’re killing me here. I doubt that skipping HS swimming his senior year made a difference, especially for an 18 year old sprinter. What made the difference was having a GREAT coach in the BEST program in college swimming.
High school swimming is having a tough enough time without encouraging it as “the right decision”. Seriously, everyone bitches about swimming not getting the recognition it deserves from the public and high school AD’s., having primo swimmers choose to opt out is not good for the sport.
ROLL ON BEARS!

Not swimming HS was the best thing he could have done! HS swimming is a joke in most states, and competition is stellar at the Jr/Sr National level in the US. Don’t bother with the HS swimming argument; it’s good for social purposes only.

While I certainly agree with this in many States, high school swimming is a great thing in a lot of other states. I think that this is an individual decision that can be right for some. Seth benefited, while the other end has Missy Franklin going out of her way to participate in the team aspects of high school swimming, while still training with her club team. To each their own.