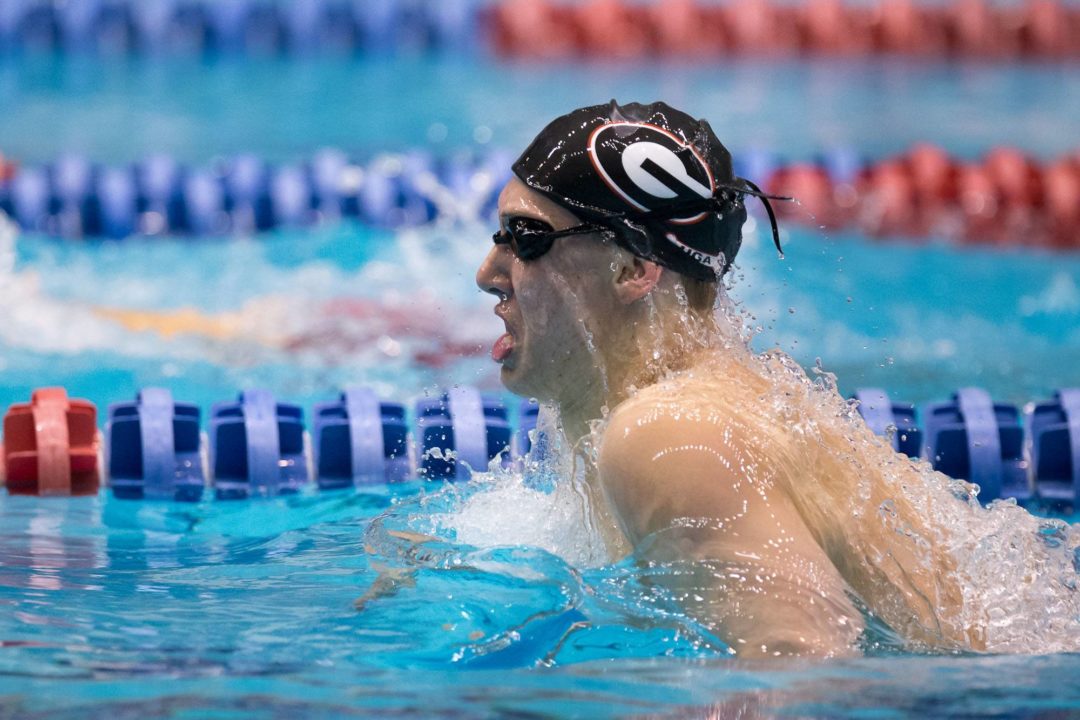 Chase Kalisz is the defending NCAA champion in the 400 IM, but he'll have his work cut out for him tonight: top seed Dan Wallace has been on fire this week. Current photo via Tim Binning/TheSwimPictures.com

Day 3 of the 2014 SEC Championships in Athens, Georgia run beginning Thursday evening, and while the Georgia women already seeming to run away with the meet, the Florida men will look to make a big dent in Auburn’s 122.5-point lead.

The 400 IM, the 100 fly, the 200 free, and the women’s 3-meter spring board (no relays) will be Thursday’s finals. The big story there will come out of the men’s 400 IM, where an on-fire Dan Wallace of Florida will challenge the defending NCAA champion Chase Kalisz.

The 400 IM saw our first non-Georgia winner of the women’s meet, although it was by the thinnest of margins. Florida’s Elizabeth Beisel popped off a 3:59.26 to just edge out charging Bulldog Melanie Margalis. Margalis finished in 3:59.85, out splitting Beisel by a tenth on the freestyle but not quite finding a way around her.

Margalis jumped out to the early lead with a 54.9 butterfly leg, but Beisel made the backstroke her key piece. She split 59.2 on that leg, the only swimmer in the field even under 1:01, and that was enough to hold on for the win, despite Margalis putting up the heat’s best breast and free splits. Both women were easily faster than what Beisel went to win the NCAA title last year.

A&M’s Sarah Henry took third in 4:03.90 before the next three Bulldogs finished in succession: Amber McDermott (4:07.09), Nicole Vernon (4:07.85) and Hali Flickinger (4:07.91). Tennessee’s Lauren Driscoll and Florida’s Jessica Thielmann rounded out the A heat.

Auburn’s top competitor, Sarah Peterson, won the B final with a big 4:10.65 beating out Amanda Carner of Tennessee. After winning the event, Florida picked up even more points with Rebecca Rainer‘s C heat win – she dropped nearly 3 seconds off her prelims time to move up 3 spots.

Not to be outdone by the dogfight of a women’s event, the men’s 400 IM provided its own brand of magic. A hyped-up showdown between Florida’s Dan Wallace and Georgia’s Chase Kalisz came up all Georgia, with the defending NCAA Champion blowing up to go 3:36.89. That’s well over a second faster than he went to win a national championship last March and is now only eight tenths off the insane NCAA record set by Tyler Clary back in 2009. Wallace had a nice swim himself, going 3:38.96, but it wasn’t near enough to match Kalisz’s outstanding effort.

The Bulldog was just that through the middle of the race, coming back from a half-second down after butterfly to split 55.7 on back and 59.1 on breast, and by that 300 turn, it was over. That breaststroke leg was a dagger to the field as no one, even the breaststroke specialists, could come anywhere near to Kalisz’s blazing split.

Salvaging things for Florida, though, was the fact that they went 2-3-4 in the event with Wallace, senior Connor Signorin (3:43.34) and junior Matt Elliott (3:43.60). Georgia’s Jared Markham took fifth, but the event should still be a boost points-wise to Florida in their pursuit of team leader Auburn.

A great event for Georgia got better with a B final win from Andrew Gemmell in 3:45.72, and Alabama’s Ian Decker took home the C final with a 3:47.95.

For the second-straight year, Florida has won the women’s 100 fly SEC Championship. It was a different face on top of the podium this year, however, as Ellese Zalewski took the win in 51.58. That was the Australian senior’s first career SEC title.

She topped Kentucky’s Christina Bechtel for that win, with Bechtel placing 2nd in 51.69. In prelims, Bechtel went out in a blazing first-50 and held on pretty well coming home. In finals, she backed way off on her first 50 (a 24.1 as compared to a 23.6) and wound up with basically the same time. At NCAA’s, one would expect that on a full taper, our best guess is that she’ll work her way back to the faster front-half.

Barbiea still ends the race as the fastest 100 butterflier in the country this season, and a lot of Missouri’s top swimmers with NCAA qualifying times already have seemed to be less-than-full-taper at this meet.

Arkansas, whose had good evening swims all week long, got a B-final victory from Susanna White in 52.90.

Florida forced about a draw in the men’s 100 fly thanks to Marcin Cieslak. He was a 45.69 in finals, a tenth slower than prelims, to take the win.

That which was once a dead spot for the Georgia women has now become a strength; for the second-straight diving event, the Georgia women went 1-2 at the finish. This time, it was Laura Ryan dominating by 50 points with a score of 413.75, and Ann-Perry Blank was 2nd in 363.80. That’s the reverse order of the 1-meter.

After Tennessee’s Lindsay Gendron won the SEC title in this 200 free last year, ending a run of three-straight event titles for the Georgia women, the Bulldogs retook their place on the throne, thanks to a 1:41.83 from senior Shannon Vreeland. That broke the SEC Championship (but not overall) Record that Morgan Scroggy set in 2011 at 1:42.46.

The Florida men finished the session with another freestyle win, continuing a perfect three-for-three run so far in the individual events.

Once again, freshman Mitch D’Arrigo went hard in prelims, just like he did in the 500. Once again though, he was unable to fight back a challenge from a more veteran teammate in finals, as Sebastien Rousseau won in 1:33.23, with D’Arrigo taking 2nd in 1:33.95.

On the women’s side, Georgia extended their lead to 250 points, while Florida remained 2nd with a 28-point margin ahead of Texas A&M. A&M has been hit with a couple of costly DQ’s from potential big point scorers.

The Florida men performed very well in finals, and wound up blowing by Auburn on the 3rd day of competition, thanks to a lot of bonus points from event wins. They now hold about a 50-point margin, which Auburn will look to fight back against in the 100 free and the platform diving on Friday.

Georgia is still solidly in 3rd, and Texas A&M has managed to hold their lead against Tennessee despite their sprinters not scoring as many as they would have liked.

Do you have to subscribe to get the live video?

If it doesn’t work…

2) try clearing your cache/cookies, or opening the URL in an “incognito” window if you’re on Google Chrome… worked for me just now, I was having the same issue

there’s no feed for me….

try this:
http://www.georgiadogs.com/allaccess/?media=436221
Its the ESPNU feed through UGA

not the best but it gets the job done.