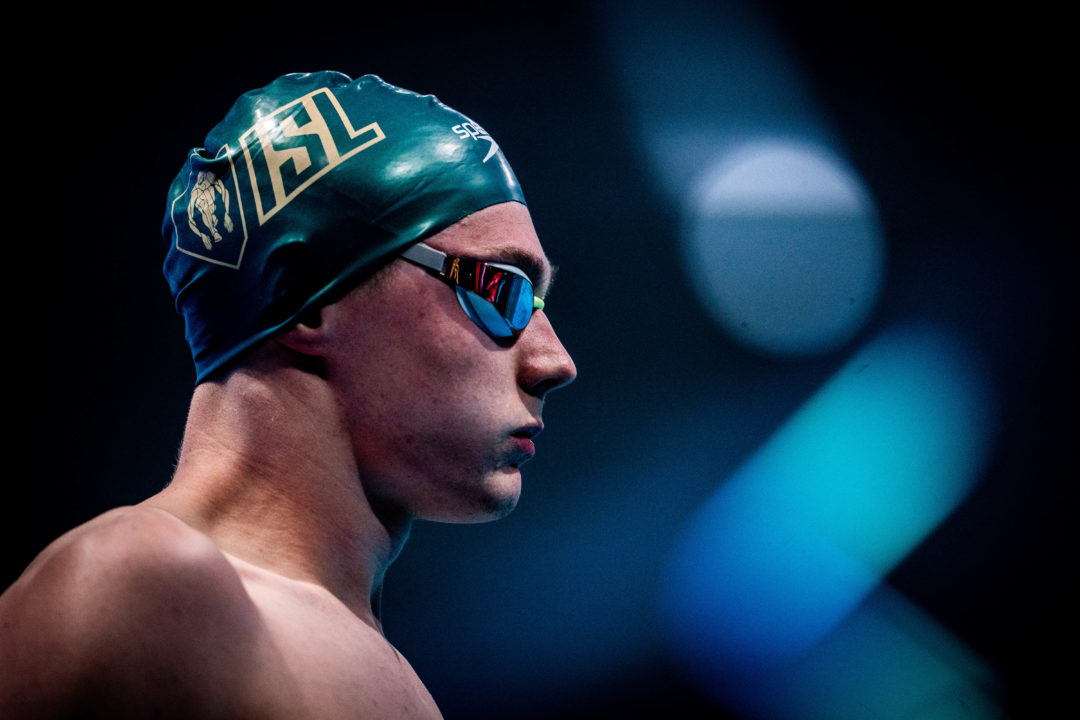 Read up on racing action on day 2 of the 2021 British Swimming Invitation Meet taking place in Manchester, with the likes of Duncan Scott in attendance. Archive photo via Mine Kasapoglu for ISL

Olympic racing may have concluded in Tokyo but there are still competitions on the schedule for August taking place around the world.

The 2021 British Swimming Invitation Meet entered day 2 prelims this morning with a new Scottish national record by Kathleen Dawson in the women’s 100m back. She fired off a time of 59.36 to land lane 4 for tonight’s final, becoming Great Britain’s 3rd fastest woman all-time in the process.

Tonight, Dawson unleashed a monster 58.65 to take the gold here in Manchester, joining Gemma Spofforth in becoming just the 2nd British woman to ever get under the 59-second threshold. You can read more about Dawson’s feat here.

Of note, Cassie Wild, also of the University of Stirling, grabbed a sub-minute 100m back time of her own in 59.56. That ranks her 10th fastest in the world thus far this season.

James Guy followed up his 100m fly victory from last night with another gold in the 200m distance this evening. Rocking the only sub-2:00 outing of the entire field, versatile Guy punched a final result of 1:56.79 to get the job done for gold.

The case was similar in the men’s 100m free, with Stirling’s Olympian Duncan Scott logging a winning time of 49.09 to Tom Dean’s 49.11. European junior champion Matt Richards rounded out the top 3 in 49.44 tonight.

Salivating over the mens 200fr tomorrow.

Scott, Dean, Guy, Litchfield & Richards all look in great shape. Really surprised by how much speed Tom Dean showed today; Massive 100 PB, and nice to see Richards looking much fresher than last month – His heat (49.1) was his second fastest 100 ever.

Don’t forget 100 back as well – keen to see what Greenbank can do, as well as Pyle.

Do you reckon Dean will go for the 400 at trials? He wasn’t great the other day but obviously has good form in it in short course…

They’ve been doing a lot of heavy work recently, so I’d put the 400 down to that personally. We saw the same with James Guy dying in the 200fl this evening – They’re looking speedy, which is superb. Taper will bring the ability to finish races off back. I think he’ll swim 100, 200 & 400 at trials now. Great shot at making both relays and a couple of individuals.

Yeah I was just having look at results and it says 26.8 for me too.

Very impressed by that performance from Dawson and looking forward to what she will do in the 200 back tomorrow. It’s arguably her weakest event but I think she might still give a strong time.
Also very excited about the M 200 free, W 200 IM and M 100 back tomorrow to see what times can get dropped!

Obviously Dawson the star of the show, wow! Based on her 50 and heat swim I was expecting 59-low and hoping for 58-high. But 58.6 is fantastic, a full second knocked off her PB today. Also delighted for Wild who’d been knocking on the sub-60 door for a while. Great work from both, and as mentioned by others, gives GB options for mixed medley relay.

Solid swims elsewhere too. Dean knocking a healthy chunk off his 100 free PB. Guy, Scott and Litchfield looking good. 200 free should be fun.

So is O’Connor still training with Hemmings or did she go back to McNulty?

not sure where she swims now

I saw her in the Lboro pool and showers a few times last year so figured at Lboro now?

She’s retired last I heard. No one is speaking about it.

That’s a real shame if so. You’d think with her talent she’d be able to make it to Tokyo and have the experience.

She was part of the England training squad for the 2022 commonwealth games and post-ISL did a bbc interview where she talked about going to Tokyo and beyond so i would be suprised if she had, especially since her 2020 ISL times were better than her 2019 times showing improvement. British swimmer is also still in her insta-bio and shes one of the biggest stars of british swimming, it would be hard to go under the radar that she has completely stopped olympic year.

If she has that would be a shame because with Wood, Hopkin, Hope, Anderson, Hall and Hibbott the british free relays looked hopeful if not to win euros but even to contend for a final place… Read more »

You could be right though, Hemmings tags all of his swimmers on twitter and never does SMOC and ive not seen a single thing of her being at Bath. That would be a shame for british swimming.

She is training with the Bath Uni team who are allowed to train, not the National Centre, where she was before. Has not been in the pool for a little while now – don’t know why.

Duncan is the next MP, or as close as it will ever get

he is a class act. i hope he can do as expected in tokyo. he deserves a legacy

I’d say Seto is the closest we have to MP right now. Is nowhere near as good a sprinter of course, but he’s approaching MP’s textile bests in 200 fly, 200 IM and 400 IM.

Great swimming by Ms. Dawson tonight, congratulations. On a related note, I watched the Manchester Meet stream at the same pool a month ago & now am watching this event with equal gusto. I have been extremely impressed with the British Swimming streaming, & highly recommend that those who haven’t watched (yet anyway) to do so.

Here are a few very good reasons: the announcer Mike is stellar – very knowledgeable, so positive & encouraging, & his relaxed style differs wonderfully from other commentators (who shall not be named), who focus on one swimmer, get very excited & then make blunders which are both legendary & cringe-worthy. British Swimming also has recordings available a short while after streaming in their YouTube… Read more »

Agree with all this. British Swimming’s live streaming of events is excellent (and free!). And I enjoy Mike’s bright and sunny demeanour when announcing. He also makes sure he does his research: for instance, for this meet he was able to compare the swimmers’ times to what they swan at last month’s meet and/or their entry times, which is good info.

And yes, British Swimming in general has a good record of putting Para-swimmers on an equal billing: they’ve been doing this consistently for a few years now.

Good to know BritSwim has been doing this for years – wonderfully inclusive. And yes, as Thomas says, the live streaming is free. Also, please note the comment immediately below correcting the announcer’s name to Steven after getting further clarification from British Swimming.

I got word just a little while ago from British Swimming that the meet announcer is actually named Steven Jamieson rather than Mike. Seems there was some confusion about his name at their end, which has now been corrected. So we have Steven to thank for being so stellar, positive, knowledgeable & encouraging.