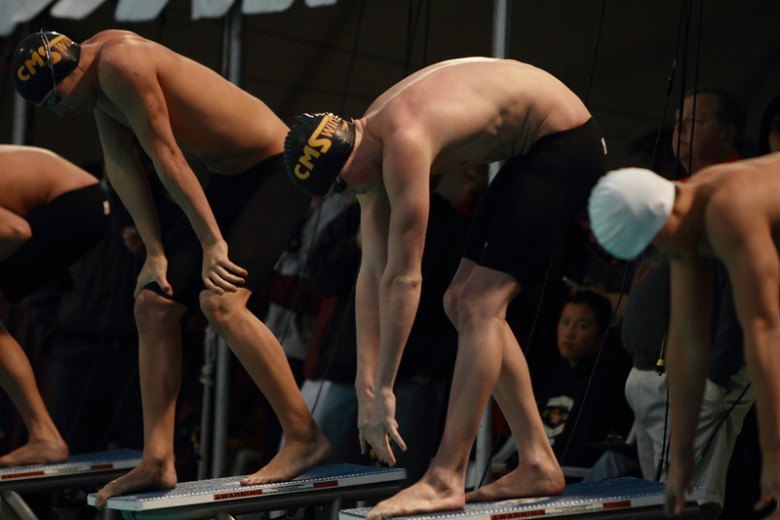 During the Southern California Intercollegiate Athletic Conference Championships (from Thursday to Sunday), the conference saw a number of records fall, and a myriad of NCAA DIII B cuts were swum by a number of individuals, as well as two A cuts posted by CMS freshman Matt Williams. Current photo via CMS Athletics

During the Southern California Intercollegiate Athletic Conference Championships (from Thursday to Sunday), the conference saw a number of records fall, and a myriad of NCAA DIII B cuts were swum by a number of individuals, as well as two A cuts posted by CMS freshman Matt Williams. Here’s the summation of the event winners and cuts that were made.

Winning the men’s 200 freestyle relay was the team of Brent Reed, Nikolai Paloni, Spencer Peugh and Nelson Glendinning with a time of 1:23.74 – just a little shy of the NCAA B cut.

James Stevick of CMS won the 3 meter diving and set a new SCIAC and meet record in the process with his score of 572.30.

The 400 medley relay went to the CMS team of Matt Williams, Zach Alleva, Patrick Schultz and Joe Hinton with an NCAA B cut time under the 2013 invite time of 3:18.30. Second for Occidental with a B cut time were Will Westwater, Steven Van Deventer, Alex Najarian and Kevin Kuwata (3:24.52).

CMS took down the SCIAC and meet records in the 200 medley relay with a time of 1:30.71 by the team of Matt Williams, Zack Alleva, Patrick Schultz and Joe Hinton. Second place and a B cut time went to Pomona-Pitzer’s team of Daniel To, Kyle Dalrymple, Will Thorson and Hugh Berryman (1:32.46). Four of the top eight relays disqualified.

In the men’s 100 back, Matt Williams of CMS posted an NCAA A cut time of 47.94 to guarantee himself a ticket to IUPUI in March, breaking the SCIAC and meet records in the process. Daniel To of Pomona-Pitzer earned a B cut with his 51.34.

In the 800 freestyle relay, the CMS team of Marc Blumberg, Alex Poltash, Conrad Shabb and Cameron Whiting posted a 6:45.56, under the 2013 invite time to win. Redlands’ grou pof David Ortyn, Jeff Depew, Nelson Glendinning and Eric Loprete posted a B cut of 6:52.13.

In the mile, Conrad Shabb (CMS) broke the SCIAC and meet records with a 14:49.94, a time also under the NCAA invited time standard from last year. In second place with a B cut was teammate Alex Mendoza at 15:54.19. From Pomona-Pitzer, Thomas Turner finished third with a B cut of 16:14.61.

Matt Williams (CMS) broke another SCIAC and pool record with his 1:45.67 in the 200 backstroke, as well as posting another A cut time. Daniel To (Pomona-Pitzer finished second with a B cut of 1:51.47. Third from Redlands was Jeff Depew with a 1:51.97.

In the men’s 100 freestyle, Alex Poltash posted a 45.09 to get under the NCAA invited time for last year’s meet.

CMS’ relay team of Joe Hinton, Matt Williams, Patrick Schultz and Alex Poltash finished first in the 400 freestyle relay with an NCAA invited time from 2013 of 3:01.64. Finishing in second with a B cut from Redlands was Eric Loprete, Brent Reed, Nelson Glendinning, and David Ortyn (3:03.90).

The Redlands team of Lauren Robeznieks, Ellie Jaques, Summer Harp and Chandra Lukes won the 200 freestyle relay with a 1:36.86, just a few tenths off the NCAA B cut in the event.

Kelly Ngo of CMS won the 50 freestyle in meet record fashion breaking the record she’d set herself in prelims with a 23.56 for a time under the 2013 NCAA invited time. Redlands’ Chandra Lukes – NCAA champion in the 100 freestyle last year – was runner up with a B cut of 23.62.

The 400 medley relay went to the CMS team of Kelly Ngo, Kayla Flaten, Annika Jessen and Michele Kee in a 3:49.75, under last year’s NCAA invited time.

Pomona-Pitzer’s 800 freestyle relay broke the meet record set in 2010 by Redlands with a 7:41.10. The squad was made of Alex Lincoln, Vicky Gyorffy, Johanna Rayl and Kay Sterner. The team’s time was also an NCAA B cut.

Jessica Robson of Occidental returned to the boards to win again on 3 mether, posting a 491.85 to break the SCIAC and meet records. The meet record she broke by nearly 20 points was established by Marra Stankus of Occidental in 1994.

CMS won the 400 freestyle relay with the team of Cassie Burgess, Ellie Smith, Stephanie Doe and Courtney Chan posting a 3:29.82 to go under the 2013 invited time for NCAAS. Also posting a B cut was the Redlands team of Haley Thiltgen, Ellie Jaques, Lauren Robeznieks and Chandra Lukes at 3:31.09.