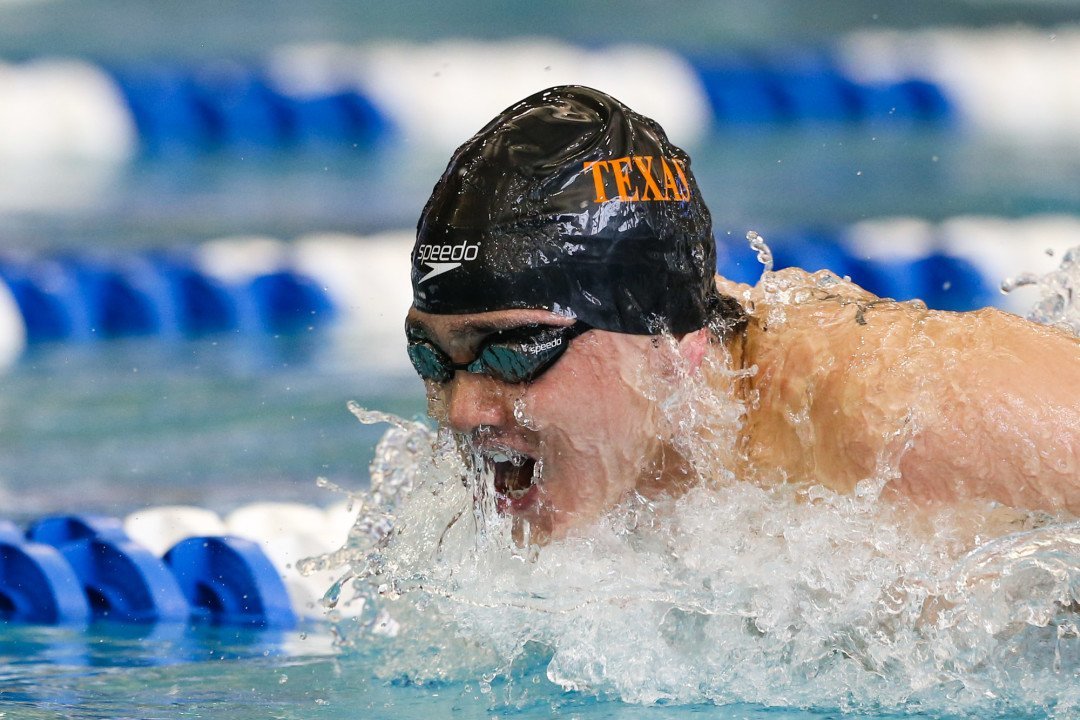 Texas' Joseph Schooling annihilated all of the records in the 200 fly, but it took a huge last 50 to even win the race. Archive photo via Tim Binning/TheSwimPictures.com

Swimming side-by-side, center-pool, in the final swimming individual event of the 2016 NCAA Men’s Swimming & Diving Championships, which will be a meet for the record books, Texas teammates Joseph Schooling and Jack Conger swam to the fastest and second-fastest times in the history of the 200 yard fly.

Schooling swam a 1:37.97, which breaks the old NCAA Record, the old U.S. Open Record, and is the fastest time in history. Conger, meanwhile, led for 150 yards by half-a-second, and eventually wound up 2nd in 1:38.06 to break his own American Record. Schooling is from Singapore and thus ineligible for the American Record.

The two swims were both more than a second ahead of anyone else in history. Coming into the meet, Conger was the fastest swimmer in the history of the event with a 1:39.31 done in a time trial at last year’s Big 12 Championships (until this year, NCAA Records couldn’t be done in time trial swims).

The astonishing thing about the swims is that Conger was out on the same pace as he was at Big 12s last year, but with another year of training for this event, a relatively-new one for the high school backstroker and freestyler, his endurance has made a big jump.

It still wasn’t enough of an endurance jump, however, to hold off the true 200 butterflier Schooling, who split 25.43 coming home to make up the remainder of a full-second gap opened by Conger in the first 50.

The third-place finisher, Cal freshman Andrew Seliskar, swam 1:39.95. That makes him the 6th man in history under 1:40 (Michael Phelps and Tom Shields are the other two not yet mentioned), and it’s the 10th-best performance in history. Bosch, a former NCAA Champion and record-holder in the event, was 6th in 1:41.11.

Imagine being a Georgia Tech swimmer and looking up at the pool records after this weekend.

He looked quite upset after the fly – hope he can get it together for the relay so we can see a great race with NC State.