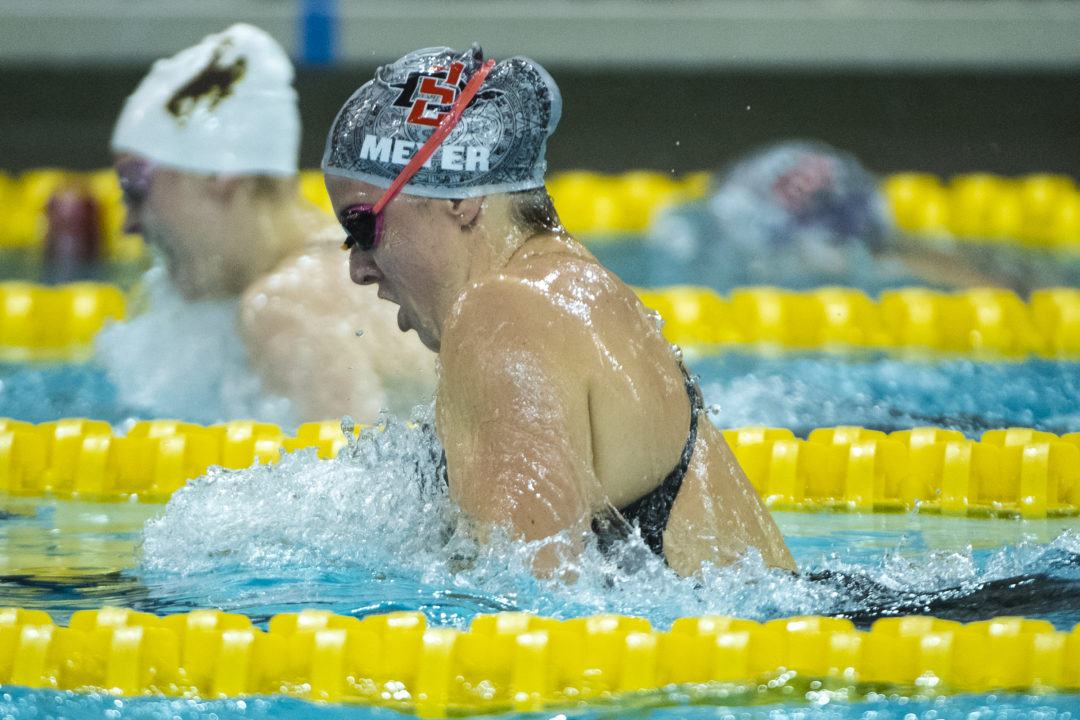 San Diego State's McKenna Meyer won the 400 IM as part of a big day for the Aztecs on Friday at the Mountain West Conference Championship meet. Current photo via Timothy Nwachukwu/NCAA Photos

San Diego State struck hard on Friday, winning 4 of 6 events on Day 3, and taking a 61.5 point lead over Nevada into the final day. The meet is not over, but Nevada will need to turn things around in the final day to catch San Diego State. Two time defending champ Boise State is likely out of it, but they hold a comfortable third ahead of a tight battle between New Mexico and Fresno State.

The 100 breaststroke in particular saw a dramatic Mountain West Conference record by Morgan McKennan of SDSU, as she outtouched her teammate Klara Thormalm by just 0.02.

In the 400 IM, McKenna Meyer of San Diego State. pulled away on the back half to win in 4:12.41. Meyer never trailed on any split, and she both outclosed the fast starters and outstarted the fast finishers. Behind Meyer, Haley Rowley of Colorado State was second in 4:14.77, ahead of Matea Sumajstorcic (4:16.01) of New Mexico in third.

Courtney Vincent gave San Diego state their third consecutive event win, as she dominated the 100 fly to win by over a second in 52.04. Vincent’s splits of 24.34 and 27.70 were both the fastest in the field. Behind Vincent, it was a tight battle for second, with Hannah McLean-Leonard of Wyoming (53.21) beating out a late charge from Konoha Shinada of New Mexico (53.37) for the second spot.

The 100 breast was the race where fireworks occurred. Klara Thormalm dazzled with a 58.94 medley relay split for San Diego State last night, and she was the top seed from this morning (1:00.36). But it was Thormalm’s teammate Morgan McKennan who was first to the 50 wall (27.73), as she and Thormalm (27.80) were well ahead of the field. McKennan extended her margin just slightly on the 3rd 25, and this was enough to just barely hold off the charge from Thormalm on the final 25 to win in 59.50 to Thormalm’s 59.52. Both times were under the old Mountain West Conference record, a 59.85 from Maria Harutjunjan from two years ago. Colorado State’s Madison Ward took third in 1:00.02, just missing the minute barrier, as seven swimmers got B cuts on the evening.

And a San Diego State team of Samantha Geyer (22.94), Alma Thormalm (22.21), Elizabeth Menzmer (22.18), and Klara Thormalm (22.47) got the 200 freestyle relay win after Boise State was DQ’d. Boise State took the early lead as Abbey Sorensen’s 22.25 was even faster than her individual win time. They then maintained that lead until the anchor, where Ayson Kleinsorgen brought them home with nominally the fastest split in the field at 22.09. But it was determined that Kleinsorgen left early by 0.02 seconds, and SDSU was declared the winners. A tough break for Boise State, but SDSU was conservative on their starts, and if the take-off times are subtracted, would have won anyway.