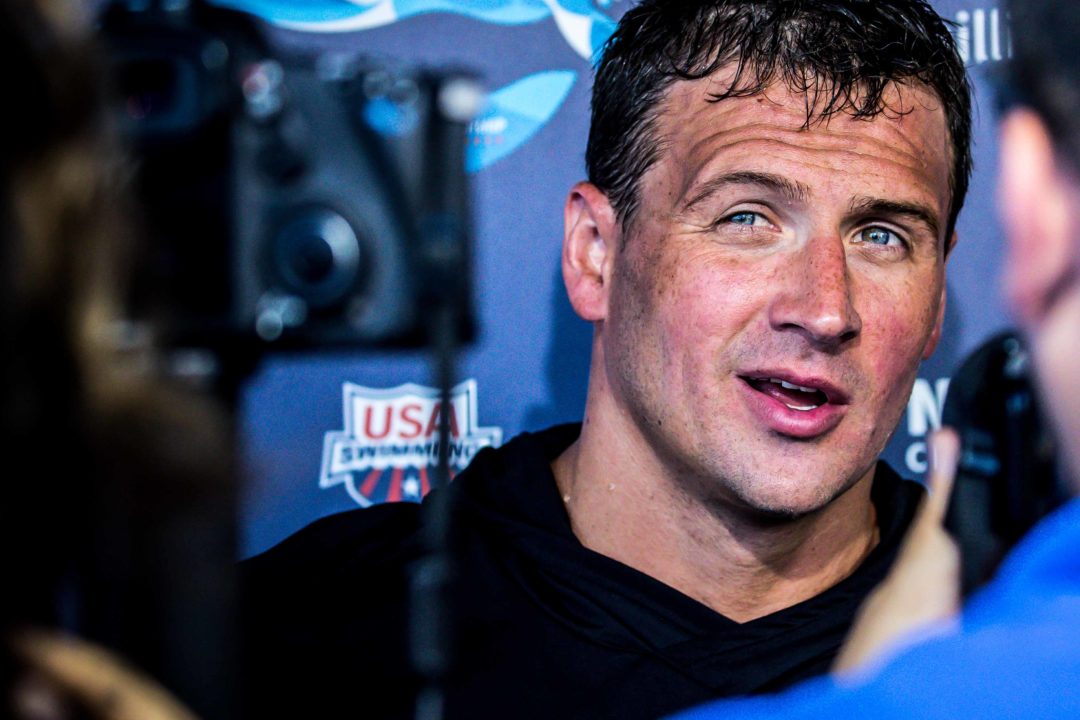 Reid says that as of Sunday morning, Lochte was still in the hospital recovering from emergency surgery to remove his appendix on Saturday. Archive photo via Jack Spitser/Spitser Photography

Four-time US Olympian Ryan Lochte is out of surgery and in recovery after having his appendix removed on Saturday.

“Hey everyone, surgery went AMAZING! I’m all good, I feel great right now,” Lochte posted on his Instagram account on Saturday after surgery. He also posted a picture of his first post-surgery meal, which was steak, french fries, and a Caeser salad.

His wife, Kayla Reid, was with him, in recovery, and posted more details on her Instagram account about his current status and what happened. Besides the appendicitis, Lochte also had a small hernia in his abdomen, and as of 10AM local time, Lochte was still in the hospital.

“He’s still in the hospital, he is doing okay, he’s doing fine, I think,” Reid said. “Still in some pain from the surgery. He had his appendix removed and he also happened to have a very tiny, tiny hernia in his belly button area.”

The couple was in California visiting Reid’s family when Lochte began feeling sick and went to the hospital.

“We were supposed to fly home yesterday, but we were kind of in and out of the hospital Friday night because he was in a lot of pain,” Reid continued. “They weren’t sure if it was his appendix. They were running a lot of tests on him because he was very, very sick and in a lot of pain. I told him I didn’t feel comfortable flying.

“So luckily we didn’t end up flying out, because we ended up going back to the hospital around 4AM on Saturday. Couldn’t be better timing, because I’m so thankful that we weren’t on the plane or something and (if) we were delayed we weren’t stuck somewhere.

“He’s in good hands and we’re just waiting for him to be able to be released.”

Since those 2016 Olympics, he also married his wife Kayla Reid, and the couple have had 2 children together.

In his first big meet after his latest suspension, last summer’s US National Championships, Lochte won the US National Title in the 200 IM. His time of 1:57.76 ranked him 12th in the world last year.

This guys deserves to finish is briliant career the right way. I really hope he can make it to the olympics a bring a medal with him. I know he exagerated the things he said in Rio but there was a gun pulled on them. He shouldn’t have exagerated but part of the things he said were true. He was portrait as a villain and it wasn’t fair. His antidoping suspension for something that is allowed and a picture on Instagram is a a total travesti and a shame when so many swimmers got away with real doping like Sun Yang and Efimova and others. It’s a shame that he got suspended the way he did… Really hope he can… Read more »

3
0
Reply
He Said What?
Reply to  GrameziPT

Hope he feels better soon. I had a perforated appendix a couple of years ago which I didn’t get treated right away. I am glad he got it sorted more quickly. One piece of advice I would give is not to eat steak and fries right now. I was told to eat soft foods and even then the “restarting” digestion part was tough. If I had eaten a meal like that day one I would have had an even worse time. Lochte is no doubt much tougher than me but he has to take it carefully. It’s hard to imagine how he works his core or woth weights safely in the next few months which I am sure is not… Read more »

Yes, everyone is aware of the Rio incident. That was 4 years ago.. why does it have any relevance in this specific instance? Let it go. Seriously

Why are you acting like it’s a bad thing to bring it up? His entire brand now is “the redemption tour.” The more times it’s brought up, the more money he stands to make if he gets on the team.

I get your point, but some of the “can this guy catch a break” comments on the other article make me roll my eyes a bit. Totally agree this is rough news and bad luck and hope he recovers really quickly… but the Rio/doping violation suspension were his own mistakes, and not bad luck. I want to see him on the Tokyo team, but maybe have a different perspective on what he’s been through over the past few years.