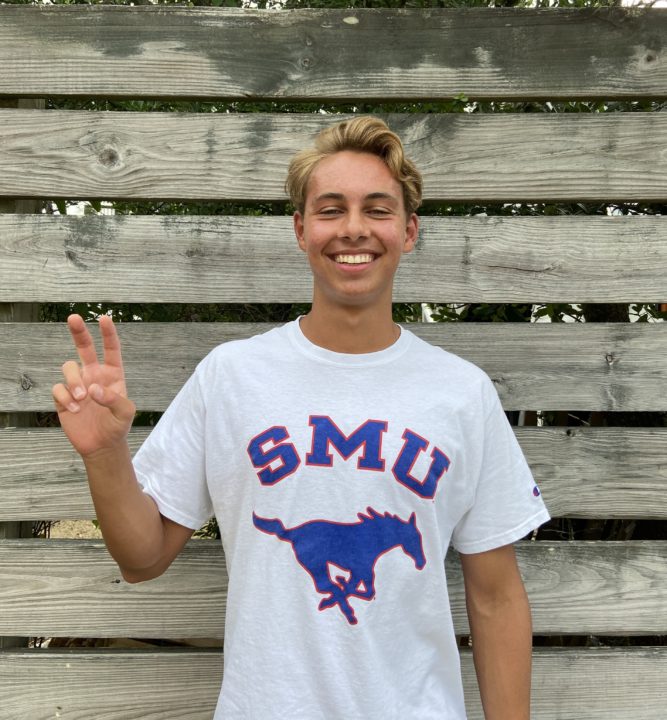 As Greg Rhodenbaugh picks up recruiting steam at SMU, Cotton Fields is the Mustang men's best add in the class of 2021 so far.

In February, as a junior, Fields was part of a team from The Woodlands that placed 2nd at the Texas 6A State Championship meet, just 3.5 points behind long-time rivals Kingwood. There, he placed 6th in the 200 IM in 1:50.62. That made him the fastest junior in the field and the 2nd-fastest underclassmen behind only Kingwood freshman Brendan Studdert (1:50.53). The top 4 finishers in that race were all seniors.

At that meet, Fields also swam on The Woodlands’ 9th-place 400 free relay, splitting 47.12 on a rolling start in the final after a 46.82 split in prelims.

Fields’ best events, the 200 back and 400 IM, aren’t part of the traditional high school schedule, however. He placed 5th in the 200 back at Sectionals in late February, his last meet before meets started being canceled because of the oncoming coronavirus pandemic. There he swam 2:05.36 in long course in finals after a best time of 1:46.33 in yards in prelims.

Early in his career, he showed promise as a distance freestyler, though the IM and backstroke races have become his focus more recently.

He joins an SMU men’s team that is seeing a rise in recruiting since former University of Missouri head coach Greg Rhodenbaugh returned to the program prior to last season.

In Rhodenbaugh’s first year at the charge, the Mustangs improved from 4th to 3rd (out of 4 teams) at the AAC conference championship meet. With 2 of those teams, UConn and East Carolina, eliminating their programs after last season, that leaves just SMU and Cincinnati with men’s teams in the conference.

The Mustangs had a good young core to their IM group last season, including freshman Colin Feehery, who won the AAC title in the 400 IM last year in 3:46.53. While Fields’ best times would have made him a 3-event scorer at last year’s AAC meet, including an A-final qualification in the 200 back, with the uncertain conference future for the Mustangs, that data isn’t particularly relevant.

He would have ranked 3rd on the SMU roster in the 200 back, just 4-tenths behind the team’s leader Matan Segal. Both swimmers ahead of Fields have graduated.

His brother’s name is Barley

Shoulda gone to Alabama with a name like that

His given name is Wyatt, Cotton is a nickname. Jokes..

I don’t understand your joke. Are you saying you’re joking about Wyatt being his given name? Or that the nickname Cotton is a joke?

Brother is Barley. It’s a joke, a play on the last name. Yeesh.

Fun name to match his smile! Had he been “Poppy Fields”, California would be his destination. Congrats!

Congratulations. The Fields kids were well known among age group swimmers and parents. I have followed Cotton since he was 7-8 (swam in same age group as our son) as they kept coming to Austin to meets. I remember Cotton winning state at 100 fly for 10&U. He was tiny but tough as nails. All their kids are tough swimmers. I am glad most of top swimmers this and next year are staying in Texas.