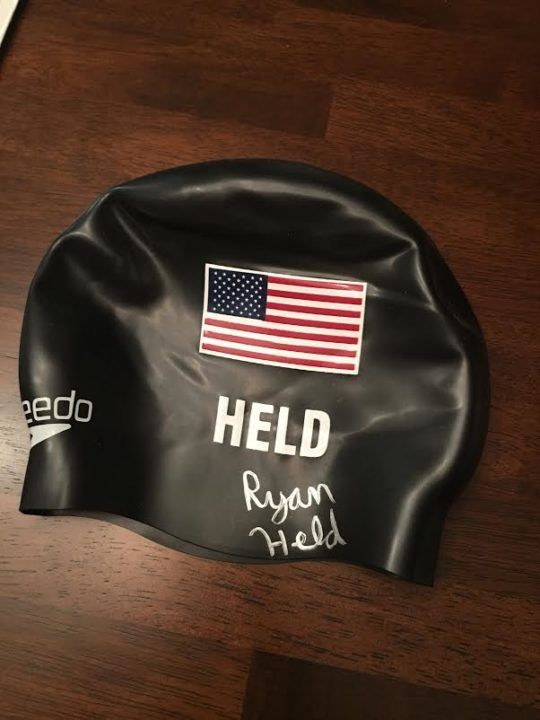 You never know what you'll receive from a Secret Santa. Current photo via courtesy of Brittany Del Rocco

‘Tis the season for Secret Santa gift exchanges where friends, co-workers and even swimming teammates give and receive gifts, most often anonymously until the sneaky parties involved are revealed. As we’re in 2016, the tradition has evolved to even take place on the web. Recently approximately 25,000 users of the social media photo sharing app, Imgur, participated in its version of the gift-giving venture, one which took an unexpected turn for a certain participant.

When Brittany Del Rocco of Warrenton, Virginia opened her random package from her Imgur gift-giver, she let out a yelp of excitement. Included in her package was a signed swim cap, complete with the American flag and a letter from its owner explaining his recent inspirational journey. The gift-giver? None other than 2016 Olympic gold medalist Ryan Held.

You never know who might be your Secret Santa as this Imgurian recently found out. https://t.co/j0TOdZFb5c pic.twitter.com/1Pax4hOcS0

“I had a legitimate freak out. I turned the envelope back over and this time paid attention to the name @Heldilox Ryan Held, Olympic gold medal swimmer. Cue the second total freak out!,” says fellow Imgur user Del Rocco. Held was a member of the United States’ gold medal-winning 4x100m freestyle relay and is now famous for his heartfelt reaction atop the podium.

Per her Imgur profile, Held knew that Del Rocco was a school teacher and took the opportunity to provide some motivation to his gift recipient’s students. Below are the images of both the letter from Held to Del Rocco, as well as the letter intended for her students.

As for the expressive words from the Olympian, Del Rocco says, “It was one of the greatest letters I have ever received. I started tearing up and shaking.”

“I teach middle school English. I raise the bar and set high goals for each of my students, and teach them to do the same for themselves. Having this message reiterated here will be even more motivation for them to do so- this will be framed in my classroom and shared with every group that comes through my door!”

Thus far, the images have upwards of 420,478 views and continues to be circulated around various social media platforms.

Ryan you cont. To amaze me. I know your parents and they must be always proud of you. You and your recipient are awesome. From a hometown girl

How nice to receive this

What a guy… He truly deserves the success that he has seen.

Article posted this week about Ryan Held on the USA swimming website
http://www.usaswimming.org/ViewNewsArticle.aspx?TabId=0&itemid=16082&mid=14491

I think readers down vote you no matter how positive your message. Stay strong. I appreciate your knowledge and insight.

Such an Amazing gesture, something the child will always remember

What a wonderful human being. Ryan will forever be remembered for that famous cry. America loves Ryan Held.

Even his signature is adorable.