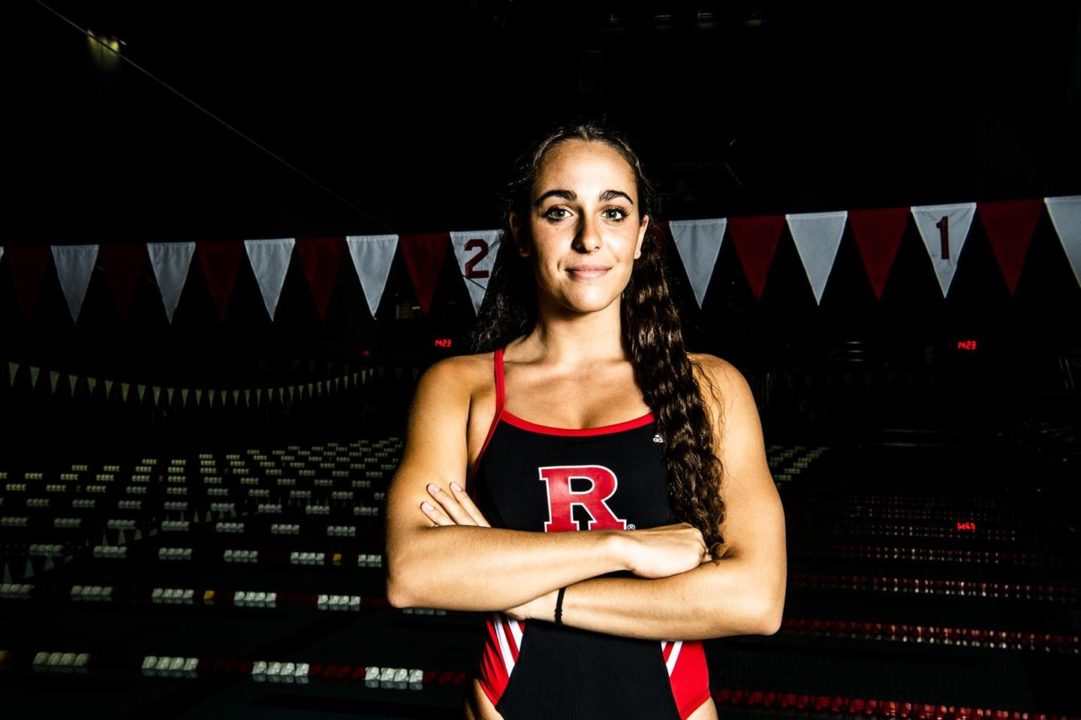 The Rutgers women's swimming and diving team closed out their weekend road trip to the Midwest capturing a 166-134 victory over Iowa State at Beyer Pool. Current photo via Ben Solomon/Rutgers Athletics

The first race of the night was neck-and-neck throughout, with the Cyclones pulling ahead of the Scarlet Knights by .16 seconds. Emily Haan, Martha Haas, Wyli Erlechman and Elynn Tan kept the event win streak alive with their season-best time of 1:44.43.

The 50 free proved to be a tight race, with Tan ultimately leading competitors with her time of 23.65. Her time came in at .12 seconds ahead of Rutgers swimmer Sofia Chichaikina.

“I thought we had some really good races,” head coach Duane Sorenson said. “Martha Haas coming back and winning the 200 breast after getting touched-out in the 100 breast, I was really pleased with that. Elynn Tan did outstanding in both of her individual races, the 50 free and the 100 fly. Wyli Erlechman did fantastic in the 100 back and 100 fly. We had a lot of really good swims, some other swimmers kind of put too much pressure on themselves to try too hard. This is all about a learning experience about how is the best way to approach this mentally and physically to get the best performance.”

Iowa State returns to competition as the swimmers and divers split up. The divers head to Columbia for the Mizzou Invite from Nov. 21-23 and swimmers to Topeka for the Kansas Classic Nov. 22-24.

AMES, Iowa – It was a quick turnaround for the Rutgers women’s swimming and diving team who closed out its weekend road trip to the Midwest capturing a 166-134 victory over Iowa State at Beyer Pool.

“It’s really hard to swim fast on the road and we swam fast both days against Iowa and Iowa State, but today we were really fast paced. We were fast in the first meet on Friday, but the difference for us was Iowa’s depth and the ability to put fresh bodies out there. Whenever you go into a power five school on the road and win, it’s a huge deal. Our sprinting was really good including standout swims by Terka (Grusova), Giulia (Ghidini) and Aleksa (Ignatova).

We get back tonight and get ready for Princeton, a meet we’ve been circling on the calendar for the first semester. It will be the first season these two teams will be racing for the Cannon Trophy.” – Head swim coach Jon Maccoll

“Just an outstanding job by the whole bunch, they really did a nice job today and it was exciting to watch. I was pretty thrilled with their performance today. On the 3-meter, Sam Blanc had an extremely good score and certainly qualifies for zones. The surprise, and very pleasant surprise and exciting result, was Marina Wilkins with an outstanding score on the 3-meter. Her performance was unbelievable and I was nearly shaking at how good it was. Sam (Blanc) also had a qualifying score on the 1-meter as well, so she’s qualified with both 1- and 3-meter scores which is important.”  – Head diving coach Frederick Woodruff

The Rutgers women’s swimming & diving team returns home to the Rutgers Aquatics Center on Friday, Nov. 15 to host Princeton in the battle for the Cannon Trophy.