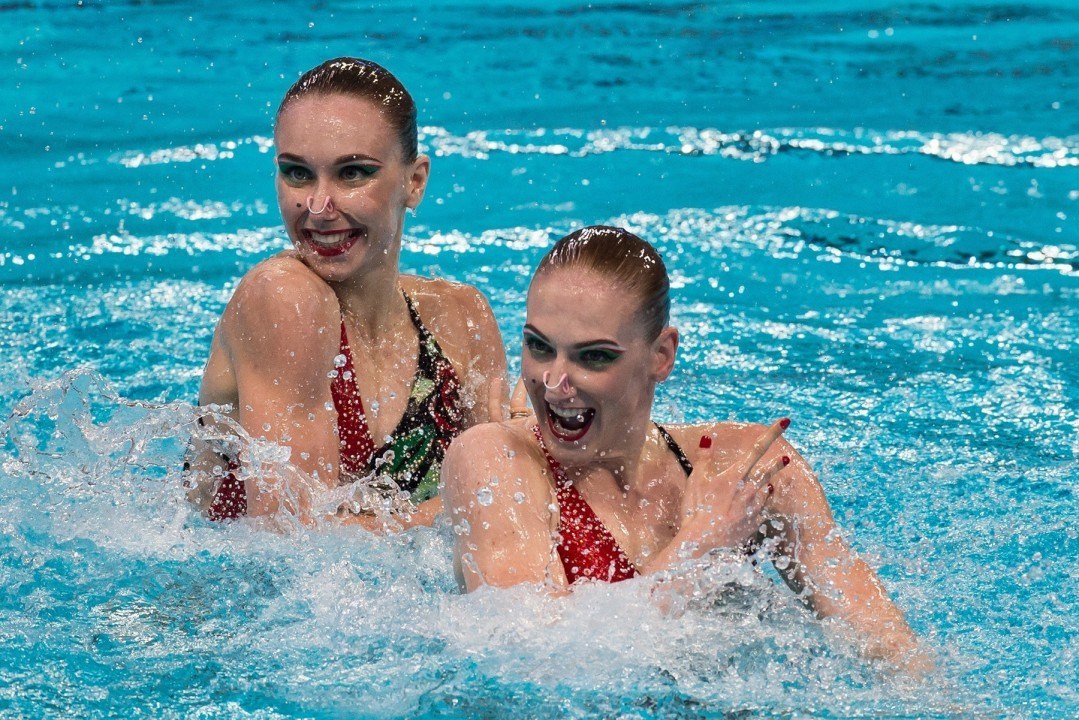 Russia secured their seventh and eighth synchronised swimming titles of the London 2016 European Aquatics Championships with victories in the Duet Technical and Mixed Duet Technical events. Archive photo via simone-castrovillari

Russia secured their seventh and eighth synchronised swimming titles of the London 2016 European Aquatics Championships with victories in the Duet Technical and Mixed Duet Technical events.

Natalia Ishchenko and Svetlana Romashina were first up, adding the European title – being contested as an individual medal event for the first time – to their World crown from 2015.

Aleksandr Maltsev and Mikhaela Kalancha followed on to become the first Mixed Duet Technical champions in the history of the European Championships, having landed theinaugural Mixed Duet Free title two days ago.

Ishchenko and Romashina also won Duet Free gold in London, using the event to build up to the defence of their Olympic Duet title in Rio later this year.

And the experienced pair were in a class of their own in the Technical competition, scoring 95.1900 for their routine to ‘Gypsy Dance’ by David Garrett to take gold by more than three points.

“Our coach told us that it was great,” said Romashina, who won the Solo Tech title on day four in London.

“At the Europeans the scores are not usually so high compared with the Worlds or Olympics, but we are satisfied with the points too.

“We are looking forward to our preparations for Rio. Maybe we will change some moves before the Olympics where we will try to do our very best.”

The Ukranians, who finished fourth in this event at last year’s World Championships, scored 91.7249 for their routine to a medley of Ukranian folk music while Cerruti and Ferro, who will be ones to watch on their Olympic debuts in Rio, scored 88.3564 for their routine to Vivaldi’s ‘Summer’ violin concerto.

While Ukraine and Italy both improved their scores from last year’s World Championships, hosts Great Britain also caught the eye as they surpassed the 80 point marker for the first time for their ‘Good and Evil’ routine to Mint Royale’s ‘Singing in the Rain’.

Olivia Federici and Katie Clark only began training together in December 2015, but have shot up the international rankings in a matter of months, adding more than three points to their tally from March’s Olympic Qualification Tournament to finish ninth on 80.4751.

“We’re really happy with the score,” said Clark. “We’ve still got a lot to improve on for the next few months but we’re definitely improving at every competition and it’s really encouraging to see our score creep past the 80 point mark.”

Federici added: “The crowd were great again this morning. Having that noise when you walk on gives you a great feeling and you know it’s going to be a good swim. The support gives us lots of positive energy which is great for us.”

Second title for Maltsev and Kalancha

Like their teammates in the Duet Tech, Maltsev and Kalancha came into the Mixed event as favourites, having won the Mixed Duet Free title by three points on day three in London.

And the pair put on an impressive performance of their military-themed routine to Tariverdiev’s ‘Seventeen Moments of Spring’, scoring 89.0902 – a tally that would have won gold at last year’s World Championships.

“Our goal was to show our best performance,” said Maltsev. “We gave everything so we are really happy. Almost all the technical elements went well.

“I wouldn’t say that we didn’t commit any mistakes but generally it was okay.”

Having won silver with Mariangela Perrupato in the Mixed Duet Free, Italy’s Giorgio Minisini teamed up with Manila Flamini to achieve the same result in the Tech routine with 86.1772.

Spain’s Pau Ribes and Berta Ferreras also repeated their result from the Mixed Duet Free to win bronze on 82.0645.