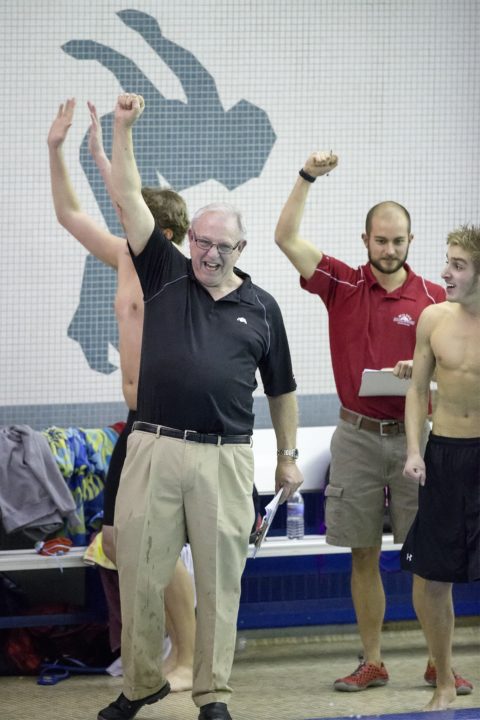 Snyder has qualified at least one athlete for the state tournament in each of the past 50 seasons, a testament to success and longevity. Archive photo via Fred Maurer

The Pennysylvania high school state championships kick off this week, and while we’ll certainly have coverage of the meet itself, here’s one fun storyline worth noting at the outset: Wilson High School coach Roy Snyder will conclude his 50th season with the program this week, a coaching run that has included at least one state qualifier every single one of those 50 seasons.

Snyder started with the Wilson program back in 1964, coaching for 20 years before adding duties as the school’s athletic director to his plate. In 2002 he retired as AD but continued coaching the boys swimming program and won his 500th career dual meet just over a year ago.

This week, Wilson will be represented at the PIAA Class AAA Championships by a 200 free relay and two divers, extending an amazing streak for Snyder: in each of his 50 seasons, he has qualified at least one athlete for the state tournament.

Wilson has had an odd season in that the team was displaced from its usual training home (aptly named the Roy G. Snyder Natatorium) as it undergoes renovations. Snyder’s Wilson team will move into their new home as early as June, when renovations are scheduled to be completed.

An awesome coach!! He truly cares about the athlete as a whole. He believes in all his athletes and pushes them to believe in themselves. He unites a team enabling them to succeed as one! Simply amazing!!

Both my children had the opportunity to be coached by Mr. Snyder. As I told my children when they were younger, he has the magic touch when it comes to coaching swimming. I am thankful that I could coach with him, too.

The classiest coach my boys have ever encountered! He truly shows a love for the sport and the young men he is coaching. Thank you coach Snyder!!

I am so happy both my boys have been able to partake of the Coach Snyder experience. Truly a great coach not just for the sport of swimming but in life! Thanks Coach- you are loved by many!

An incredible man, so honored and blessed to be coached by Roy Snyder.