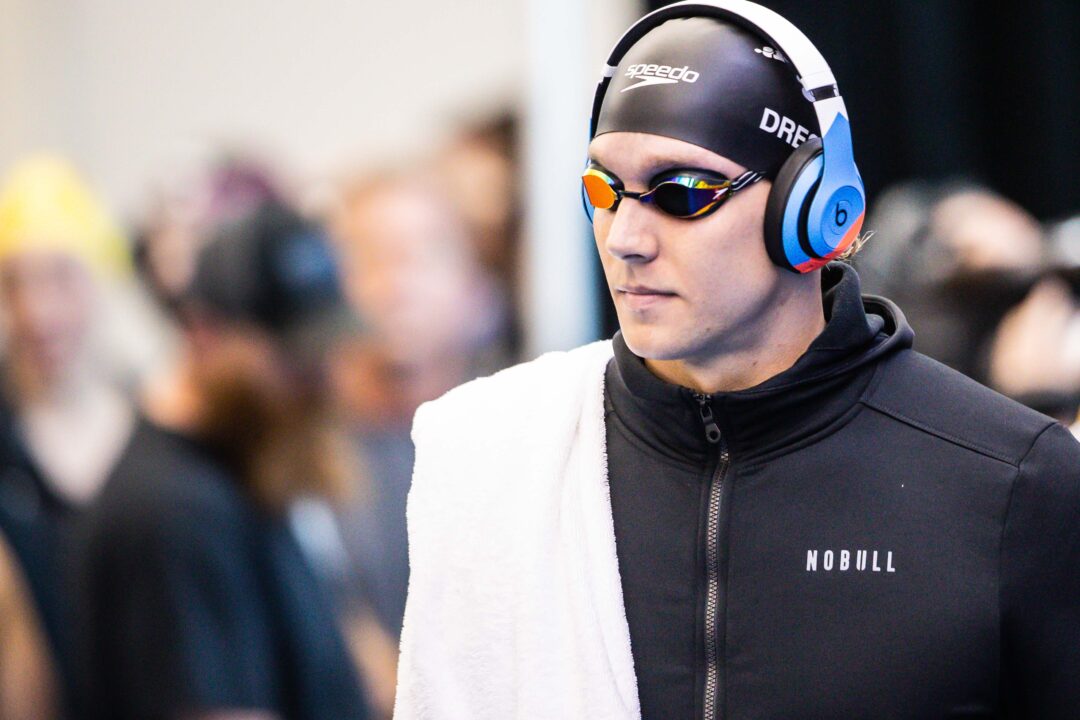 Three-time Olympic gold medalist Rowdy Gaines sat down for an interview with Maria Taylor on the premier episode of “Chasing Gold,” a new monthly series on NBC Sports that focuses on Olympic sports in the leadup to Paris 2024. As NBC Sports’ voice of swimming since the 1996 Olympics in Atlanta, Gaines was interviewed in the first episode of the show, where Taylor asked him about American swim star Caeleb Dressel, and the challenges he’s been facing this year.

The seven-time Olympic Champion pulled out of the World Championships in the middle of the meet this June, and then went completely silent on social media. Dressel reemerged about two weeks ago, posting on his Instagram saying he hasn’t swum since he left Worlds and that he’s taking a break from the sport.

Gaines reveals in his interview that he’s been in communication with Dressel since after last summer’s Olympics in Tokyo. According to Gaines, Dressel was struggling in the in fall to get back into training and “just didn’t really enjoy swimming very much.” Gaines also tells Taylor that he suggested to Dressel in the fall that he “take some time off, take six months.”

When Gaines and Dressel spoke a few days ago, Gaines recounts Dressel saying “I didn’t really do that, but now I’m in the best place I’ve ever been,” referring to his experience being away from swimming for the last three months. Rowdy then predicts that Dressel will be “just fine” looking forward in his career, citing his support system.

Gaines also reveals that he believes Dressel is taking six months off, which is the first news we’ve gotten on projected length from his break. Six months from when Dressel first removed himself from Worlds would put him getting back in the pool sometime in December, or around the start of the new year. Of course, that timeline came from Gaines, not Dressel, and Gaines didn’t say definitively that Dressel is taking a six-month break, just that he “believes” he is, so it’s possible that isn’t Dressel’s timeline.

Taylor then asks Gaines about how much time Dressel could take off from training and still be in shape for Paris 2024. Gaines says his rule for time away from the pool is that every day out of the pool will require half a day of training to get back to where you were. According to that principle, Gaines says he thinks it would only take Dressel about three months of training to get back into racing shape after a six-month break. He concludes that segment of the interview by saying “I think he’ll be ready, both mentally and physically, when we get to those Olympic Games. ”

You can watch the NBC Sports interview here:

Of course Rowdy makes it about him. “I told him to take some time off”
Rest up Caeleb-swimming is better with you

We need some 47. 100 free guys, need too call Nathan adrian and maxime rooney out of retirement. P.s. and blake perioni who just retired last week.

“Not really enjoying swimming anymore” is not a mental health problem.

Depends on why he isn’t enjoying it.

Calm down! USA Swimming did not implode when Lochte and Phelps retired.

Who is carrying the flag in the 100free? Anyone besides Dressel with 47 low potential? Casas?

*Ryan held has entered the chat*

2
-1
Reply
ur mom
Reply to  Weinstein-Smith-Ledecky-Sims

It it was an interview then it’s not a private conversation. If they are friends than I hope Rowdy was clear on what he would disclose to others

Checking out before or after the Worlds, OK. Actually during the Worlds competition is a little suspect to me. Just can’t see another sports star checking out during a major event. Best stuff or not, go compete and finish it.

I’m not saying I agree or disagree with any of this, but we quite literally did see this exact thing happen last year. Did you already forget Simone Biles and the Olympics last year? Biles was shamed by people from the entire world for what she did… it’s no wonder Dressel has been quiet about what happened to him (again, agree or disagree).

Simone Biles and the Olympics was similar. That event seemed to have opened the gateway to athletes taking time when they want/need it and not grinding through a competition.

Simone Biles checked out of the all around event but came back for the individuals. Hers was more a safety issue because she couldn’t land on her feet but she stuck around to get over it and compete. Was Dressel in danger of slipping off the block and falling into the water? Missing a turn and swallowing water? Simone Manuel competed with her mental/physical issues knowing she didn’t have her best stuff. Just take your lumps

Yeah people keep saying Biles is equivalent but she’s really not. She was at risk of serious injury or death if she competed that day. Completely different situation.

Keep ya mouth shut, you have no idea what it’s like to be the p4p best swimmer in the world…you probably suck at swimming boi

LOL at the people downvoting this, it doesn’t change the fact that Simone Biles did it just a year ago.

Simone Biles’ situation was different for a lot of reasons.

One is that she stuck around and was a visible supporter of the team. Another is that she spent a lot of time explaining why she did what she did. Yet another is that she pulled out for competitive reasons – she had the ‘twisties,’ which meant that someone else on the team was likely to perform better in that situation (whereas Caeleb had already proven that he was on form physically at the meet).

I can see the temptation to draw a parallel between the two situations, and that’s not entirely without merit, but in my head they weren’t the same decision.

Caeleb has always struck me as a naturally active person so I doubt he completely neglects working out during his 6 month break, it just will he for enjoyment instead of crushing to win. Maybe does some more lifting, yoga, hikes runs, working around the farm. Should stay in pretty decent shape and not lose everything.

Are there any professional swimmers that don’t strike you as being active people? Lol

Ian Crocker. Just look at recent pictures of him.

As opposed to a couch potato?