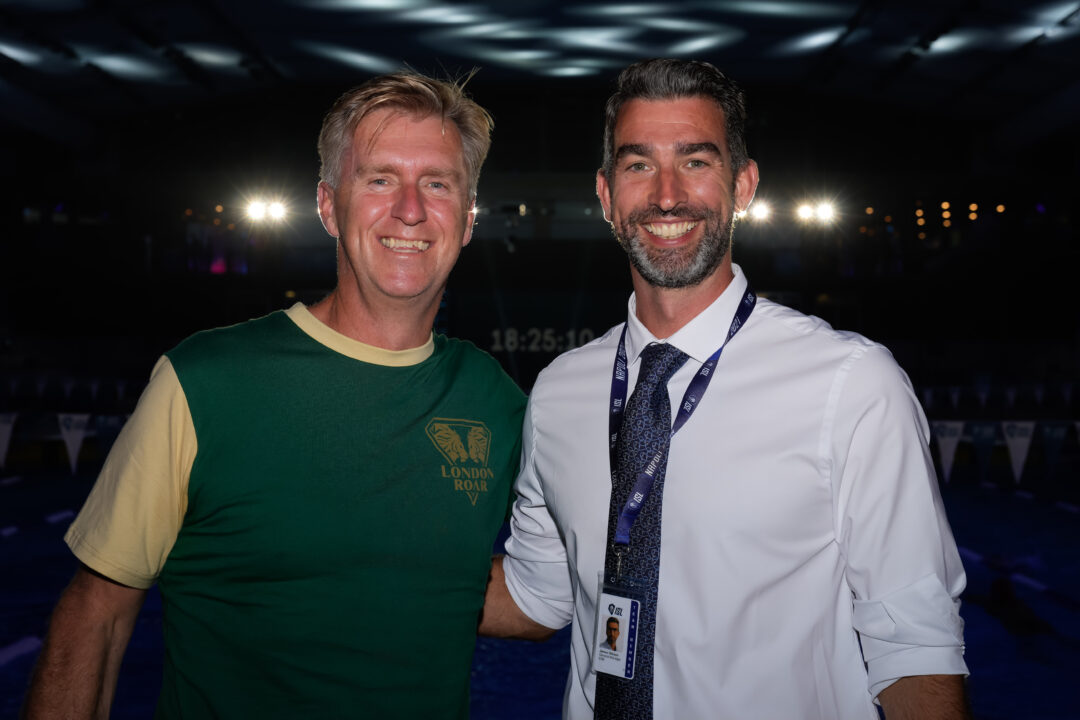 Rob Woodhouse has resigned as the general manager of the London Roar of the International Swimming League after guiding the team through the first three seasons of its existence. Woodhouse’s team qualified for the league final in each of those three seasons.

“It has been an incredible journey since we announced the formation of the London Roar team back in 2019 and went so close to winning the inaugural ISL title in Vegas,” Woodhouse said in a statement. “It has been my absolute privilege to work with so many of the world’s greatest swimmers and coaches over 3 successful seasons.

“Thank you to each and every London Roar team member, I’m so proud of what we achieved together and, most importantly, what we all learned from our experiences as part of the ISL and the London Roar. Thank you also to Konstantin, the ISL team, all other GMs and everyone else involved. I wish the league every success going forward.”

The Roar finished just 9.5 points behind Energy Standard in the first championship match in 2019 in Las Vegas. While the team has finaled in each of the three seasons, they haven’t been that close to the title since, largely due to the challenges that the Australia-heavy roster has had in coming or going from their country during the pandemic.

Woodhouse brought a certain level of savvy to the league and experience in the business side of elite sport that many of his peers didn’t have. Woodhouse is the Olympic Talent Director at TLA Worldwide, a talent management agency.

Through TLA, he manages a number of the team’s and league’s stars, including 11-time Olympic medalist Emma McKeon (who is his niece), Adam Peaty, Duncan Scott, Cate Campbell, Bronte Campbell, and Minna Atherton.

Woodhouse himself was a 1984 Olympic bronze medalist in the 400 IM for his native Australia.

There’s some question about what this will do to the future of the Roar and their ability to recruit athletes. Besides the obvious, those athletes who he represents directly, this move could disrupt the Australia-to-London pipeline of the top swimmers from down under.

A league spokesperson says that it is “to be determined” whether Woodhouse will maintain his ownership stake in the team. An email sent to him on Wednesday morning received a reply indicating that Woodhouse is on vacation until Monday.

The Roar are at least the 3rd ISL team among 10 to have a change in general manager in the last 18 months. Tina Andrew resigned from the role with the New York Breakers before Season 3, while Energy Standard GM Jean-Francois Salessy resigned mid-season in November 2020 in a fiery diatribe against league management and its founder Konstantin Grigorishin.

Woodhouse also became a public critic last season of the late payments by the league, though not to the same degree as Salessy was.

Woodhouse told SwimSwam that he views the late payments as a subset of broader problems within the league.

“The league needs people in key positions such as GM roles who believe in the vision and strategy of the league.  Over time I’d lost that belief and feel there’s a distinct lack of clarity on where the league is heading long term and the ability of the league to be a commercial success,” Woodhouse said. “Issues such as non-payment are obviously a part of that.

“I sincerely hope the league is a great success, and Konstantin Grigorishin deserves that given the huge positive effect the ISL has had on the world swimming landscape. But unless GMs and others who fully understand both the sport and the commercial landscape are involved in the planning process there’s a difficult road ahead.”

“Rob is an absolute legend of a person and general manager,” said team captain Sydney Pickrem. “From the first time we spoke, he gave me so much confidence and showed me how much he believed in me. Rob created a culture in London Roar over the past 3 years that will continue.

“The atmosphere and comradery between athletes and staff is so special on the London Roar, and we have Rob to thank for that. We will miss having Rob in the box, but his legacy will always be with us in spirit!”

World Record holder Kyle Chalmers, Pickrem’s co-captain, echoed her thanks. “I want to say a huge thank you to Rob for his tireless work over the past 3 seasons of ISL and his commitment to all the athletes involved with the London Roar. We couldn’t have had the success and fantastic memories without you.

“It’s been an honour to swim for you and get to know you, I am very lucky to call you a friend and have so many friends globally after the environment and team you created.

Anyone know if Marshall or Tigg will consider HC role?

Both have athletes managed by Woodhouse, so assume that was a draw.

My guess is that this season, Marshall is going to be all-in on the long course meets, and wouldn’t make the room for this ISL season, as it stands now.

All that to say, though, that it seems quite plausible that we haven’t yet seen the final product of what this ISL season will look like.

He should just manage Emma . She must be getting offers 24/7 .

Not a particular surprise given how ISL3 panned out and some of his comments. Will be interesting to see whether he does cut all ties or not.

Certainly his savvy, plus connections in a number of countries, proved a major leg-up both with the establishment and recruitment; an area where a majority of teams have had to learn on the run.

If this proves to be the first in a number of such resignations/withdrawals, rather than a one-off, then its hard to see the ISL surviving without complete overhaul.

it would have been something in the first two years that did it for him. when he was on brett hawke’s podcast, he said that he was stepping down at the end of the year. and that interview was recorded before season 3 even started

Why does every ISL story raise more questions than the previous?

In case anybody else was wondering, the NYB twitter account is active for the first time since last weeks article! They liked one of London Roar’s posts 🍿

Lol i did not mean to comment this on this article

edit: Tina Andrew resigned from the role with the New York Breakers before Season 3, and has since taken up the role of social media management for the team

NY Breakers currently have no GM or Head Coach. Several other changes are happening with other GM’s.