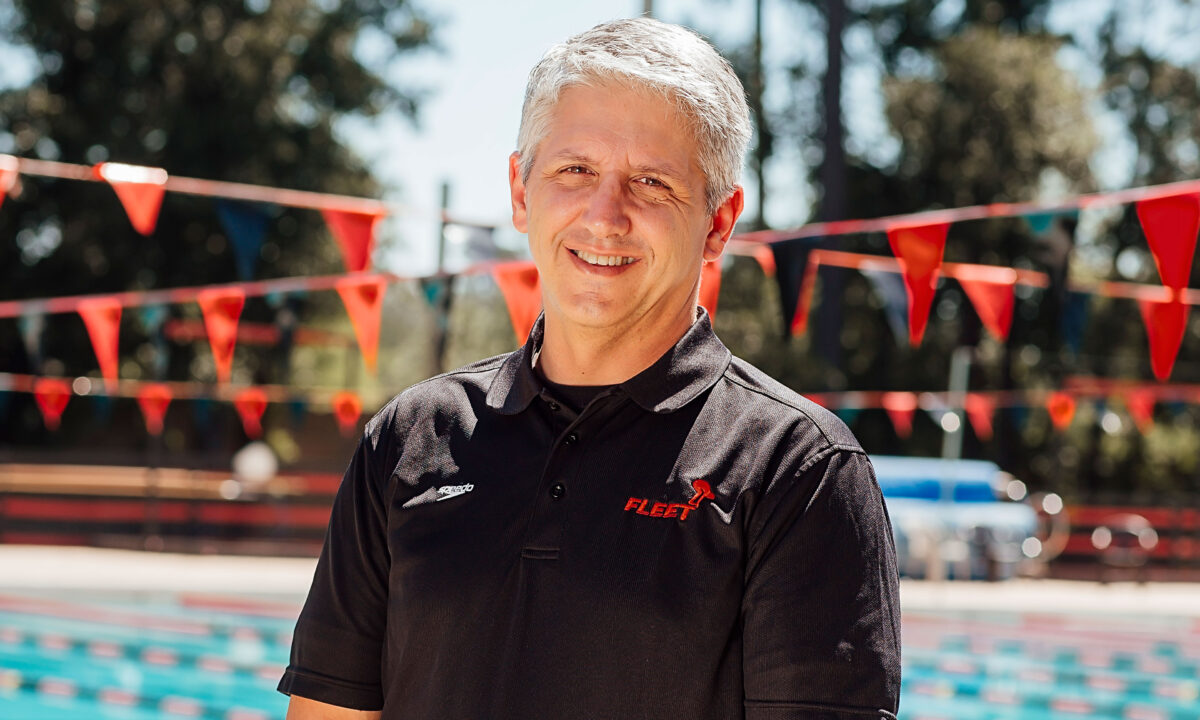 The Cypress Fairbanks Swim Club (FLEET) Board of Directors have announced Rick Boucher as the club’s interim head coach, per an email sent to the team on Friday.

Boucher is succeeding former head coach Jamie Lewis, who joined the team in September of 2021.

Boucher was named an ASCA/Fitter and Fast Top 50 Age Group Coach of the Year in 2021. He began his coaching career in his home state of Maine, and since moved on to be the head coach of Buffalo Area Aquatic Club, Shelbyville Sharks, Paducah Swim Team, and the Northern York County YMCA Team.

Boucher joined FLEET in 2015 as an age group level coach. In 2018, he became the coach of the Masters program, and in 2019, he became the coach of the Senior Red and Senior White teams. Throughout his coaching tenure, Boucher has mentored a number of successful swimmers, with his athletes achieving YMCA National, US Open, and Grand Prix qualifying standards, as well as top 10 and top 16 nationally-ranking swims.

He has served as a coach for the GULF Swimming Select Camp and USA Swimming’s Blue Ribbon Camps, as well as a seven-time member of the Zone Team coaching staff, serving four times as head coach. On the administrative side, he served one term as the technical planning vice chair for Niagara Swimming and two terms as the Program Development Vice Chair for Kentucky Swimming.

FLEET is a part of the GULF Swimming LSC, located in Cypress, Texas. It is currently recognized as a Silver Medal Club in USA Swimming’s Club Excellence Program.

A huge congratulations to Rick as he is a fantastic and dedicated coach that the Fleet Family values.

After reviewing the replies, the assumption regarding what occurred with Jaime needs to be factual.  The fact is that Jaime was terminated.

In addition, swimmers that she coached became their own advocates and individually spoke to a large group of parents that certainly did not engage in behaviors that one would expect of an adult.  Swimmers provided examples of how they felt bullied, spoken to in a derogatory manner, and an overall lack of satisfaction.

Jaimie has garnished the loyalty of several board members who resigned and are refusing to accept the decision.  Strategic meetings have occurred with selected families, perpetuating the divisiveness felt by… Read more »

Paul, you are very accurate. Thanks for pointing out the facts, not hearsay and rumors.

Bocci should of taught her don’t piss off the prema Dona national kids or you won’t last long…. Who cares about the other 300 kids

“Paul Sherman” – a fake name/email that has now been used on both sides of the divide at Fleet. Above acting like their not a huge part in perpetuating the divisiveness at the team.

As mentioned, swimmers became their own advocates and spoke about their experiences with Jamie at the board meeting. One stood out to me when they called out their teammates for how disrespectful and unwilling to put in the effort to be successful under Jamie at Fleet. Others have shared stories of senior group swimmers telling her on day one that she will never be “their coach” and showed that throughout the year by doing things like “hiding” in the locker room to be late to… Read more »

You’re still here? Even after getting exposed as to not knowing anything?

This is extremely one sided. Most of the kids who spoke out against Jaime were always at practice and always respectful, yet they received terrible treatment. Those kids put all their trust in jaime and in the end they finally had enough. Why are we attacking children? For a teenager to speak up in a room full of angry parents couldn’t have been easy, they must have felt very strongly about what they were saying, or they wouldn’t have done it.

‘Frustrated Swim Parent’ was just mentioning the things that ‘Paul Sherman’ conveniently failed to mention in his (her?) one sided post.

@anonymous, I 100% agree that it couldn’t have been easy and in no way am I trying to attack them or diminish the feelings that any of those swimmers who spoke up felt. Their feelings are theirs and they must have felt strong enough to get up and speak in front of everyone. I wish all of them the best and hope that they are all still friends or at least friendly to each other no matter which side of this situation their opinions are! One of the best part of swimming are the lifelong friendships you gain during your swimming career.
My point was to share another side of how people at Fleet are feeling and that there… Read more »

Glad to see Rick continuing to thrive and hope this turns into something more. Hopefully he’s picked up a few more cooking recipes to brag about as well!

What happened to Jamie Lewis?

What a weird article to not even mention that

Let’s be honest: There have been some problems at Fleet. Failure to file tax returns, board turnover, staff turnover, conflicts over the role of summer league swimming. Jaime took over a messy situation when she took over. Did she try to do too much, too fast or was the situation just too impossible to manage? That is a matter of perspective. What matters is going forward the team and parents and swimmers move in a positive direction.

If I had to guess, the last straw was when she brought in Gregg Troy as a paid board member.

Imagine hiring your BFF/former coach to be on your board as a way to funnel him some retirement money, and then getting fired by that board shortly thereafter lol.

Imagine having the board vote and agree on bringing Troy on board and then using that as an excuse to get rid of the head coach. That’s either extremely deviant or your guess is wrong.

Or like, maybe Gregg Troy isn’t a good fit for a youth swim team, and it highlighted a serious lapse in judgement?

I would happily let Gregg Troy train my adult pro swimmers if they thought he was best for them.. I wouldn’t let him anywhere near my youth swim team.

I don’t think Troy ultimately accepted any position on the board.

I do not think that you are accurately telling the story regarding Gregg Troy. Troy was to be hired to manage the club. The club did not file tax returns and lost its 501c3 status. Does that mean the club was mismanaged? Does that mean Greg Troy was the right guy to manage the club? Again, that is perspective. But suggesting that she merely wanted to “funnel her BFF retirement money,” is too one-sided to be taken seriously. This is a good example of the attitudes that just need to go away. The club has problems. Fixing them may involve disagreement. Disagreements do not have to devolve into personal attacks.

yeah, because someone with 40 years of head coaching experience, multiple NCAA coach of the year awards, multiple Olympic team coaching appointments, multiple Olympic gold medalists, etc isn’t qualified to sit on the board of a club swim team on their own merit. /sarcasm

I swam for Troy back in the 70’s – before he became famous. I agree with your comment. I should also mention that I’ve stayed in touch with him over the years. He’s a great person.

More from Kathleen Kemp
See All