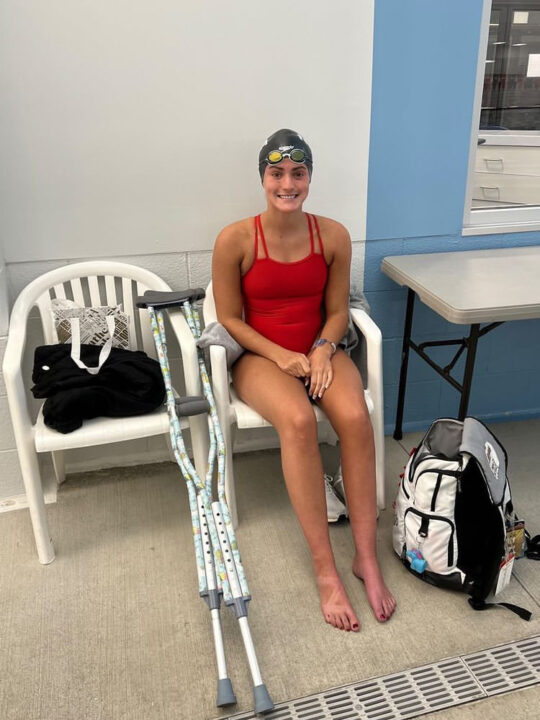 Incoming South Carolina Freshman Claire Dafoe has been diagnosed with CRPS, a rare condition where pain lasts longer than it should given the level of trauma causing it. Current photo via Claire Dafoe

Claire was involved in an incident while weightlifting where a 45-pound plate fell off a teammate’s bar onto her foot. A visit to the ER and multiple follow-up appointments for x-rays and MRIs with an orthopedist showed no evidence of broken bones in either her foot or ankle. The orthopedist diagnosed her with a sprained ankle and recommended that she begin physical therapy.

Still in considerable pain after multiple weeks of therapy, Claire sought a second opinion from another orthopedist, who told her to “suck it up and push through the pain”. With upcoming regional and state meets for the high school senior, Claire continued therapy while getting back in the pool, enduring the pain in her foot. She competed a full schedule in both meets (200/500 free, 200 medley relay, 400 free relay), only dropping the 200 medley relay at states in order to rest her foot for her individual 200 and 500 frees.

After her state meet, an MRI showed a bone plate irregularity with prominent subchondral marrow edema from a fracture, and was placed in a cast for 4 weeks. Now three months after the original injury, she was becoming frustrated with the lack of improvement in her condition. This prompted her to visit a third orthopedist for an ultrasound of her foot and nerve study, from which the results would diagnose her with CRPS. She was advised to seek therapy immediately, which led her family to the Johns Hopkins All Children’s Hospital in St. Petersburg, Florida. After being evaluated on May 4th, her 18th birthday, the doctors confirmed her diagnosis and scheduled her for admittance on June 6th. Due to positive COVID tests in the family, her treatment was postponed for 7 weeks and her new admittance date is now July 25th.

Her 1-2 week holistic in-patient treatment will require surgery and therapy to reset her sympathetic nervous system, which should help significantly decrease her symptoms. After her stay at Johns Hopkins All Children’s Hospital, under the care of Dr. Cucchiaro, she will continue outpatient therapy at home and at university.

Claire hopes that spreading awareness for CRPS will encourage athletes who suspect they have an injury to seek care, as early diagnosis and treatment are crucial to reducing long term effects. She hopes that people will support their teammates through their injuries by validating their experience, which was important to Claire as she struggled with mental health and self harm in the past year due to her prolonged injury.

Claire has a positive outlook on returning to the sport post-treatment, as it has been difficult for her to spend so much time away from the pool. While missing the sport, it has only made her appreciate it more and she is excited to work hard and get back to training at the elite level she was at before her injury: “I’m really confident that at The University of South Carolina with Jeff Poppell, I will be able to whip back into shape and hopefully reach my dream of qualifying for NCAA’s. I know that my recovery after my treatment will be a very long, and difficult process but I know with all of my heart that I will be okay and I will keep pushing through.”

In her most recent meet, Claire placed 2nd in the 500 and 7th in the 200 free competing for Cosby High School at the VHSL Class 6A State Championship. She swims year-round with NOVA Virginia Aquatics and will continue her career collegiately at the University of South Carolina in the fall.

CRPS, known fully as Complex Regional Pain Syndrome, is a syndrome characterized by a continuing (spontaneous and/or evoked) regional pain that is seemingly disproportionate in time or degree to the usual course of pain after trauma or other lesion (RSDSA). CRPS has acute (recent, short-term) and chronic (lasting greater than six months) forms. CRPS used to be known as reflex sympathetic dystrophy (RSD) and causalgia(NINDS). CRPS is often misdiagnosed, as it is rare: only 5 in 100,00 children per year are affected (NORD).

What is the surgery planned and how was she lucky enough to get into John Hopkins’s?

I have CRPS and just like Claire ( prayers for you) I kept seeing doctors until I got a dx an into therapy and have tried almost every treatment including Intrathecal pump as it is widespread after 3 years.

I have tried since before COVID to get into any teaching hospital who knows all the components of the disease for the best chance.

I have not found one accepting patients for inpatient multi disciplinary care.

I would love to hear more. I also live in the Carolina’s

Feel free to email Claire she enters the program Monday, we were very fortunate to find the program. [email protected]. She will be happy to let you know the contacts.

My daughter developed CRPS when she was 9 after an injury. It took quite a lot of trial and error and searching for healthcare providers who understood/could help. Like you, my daughter was told to “suck it up” by quite a few. My daughter is 21 now and doing well. I understand the struggle and would be happy to be there to listen if Claire other family wants to talk. Your pain is real. It’s not all in your head. Elliot Karen’s TED talk on complex pain helped us explain it to others. The RSDSA society is full of resources and wonderful people https://rsds.org/.

Worked in Pain Management Clinic for 26 years as PT. First thing done for CRPS in our facility was a lumbar sympathetic block.

Why was her teammate not using a clip to keep the weight on the bar?

Probably because they are high school kids who were either not supervised well or not trained properly.

Or maybe accidents happen whether you’re trained properly and/or under supervision.

Medicine has come a long way. Hopefully the treatment will be successful. Good luck Claire!

My girlfriend has this… unfortunately it rarely gets better. They use ketamine to try and reset the nervous system, but many times it just provides temporary pain relief. The bad days will be very, very tough. Hopefully S Carolina will be a good support system.

All the best, on this long journey, Claire.

I’ve heard good things about Jeff as a person.

Jeff, as far as I have interacted with him, is a very nice person. His son is also a super nice guy.

Not necessarily true, my D1 swimmer is back in the pool, pain free, after having her CRPS successfully treated with 2 stellate ganglion blocks and OT to retrain the sympathetic nervous system. CRPS is a brutal disease! The key is early diagnosis. Prayers for Claire and her team of doctors! Hang in there Claire you can beat this!

She’s a super strong willed young lady! Beating CRPS is her new challenge, watch out NCAA she’s on her way!

You don’t “beat” CRPS, it goes dormant, and then comes back. With vengeance. After all, it is nicknamed—the suicide disease.

Totally not true! My daughter had and overcame CRPS. It hasn’t reoccured and it’s been over 10 years.

I hope that stays the case for her, but 10 years of remission for someone who gets it as a kid isn’t even a long run. Got mine when I was 12 (hindsight, not diagnosed at the time). It didn’t come out of remission until 45. That said, those of us with long term cases, tend to forget that 80% of cases go into remission and never come out, but remission isn’t necessarily gone (I still had many sympathetic symptoms even during the decades the pain was at 0). Just some added reasons for eat healthy, don’t smoke, don’t drink, stay fit… And if at all humanly possible, don’t immobilize that limb.

More from Kathleen Kemp
See All