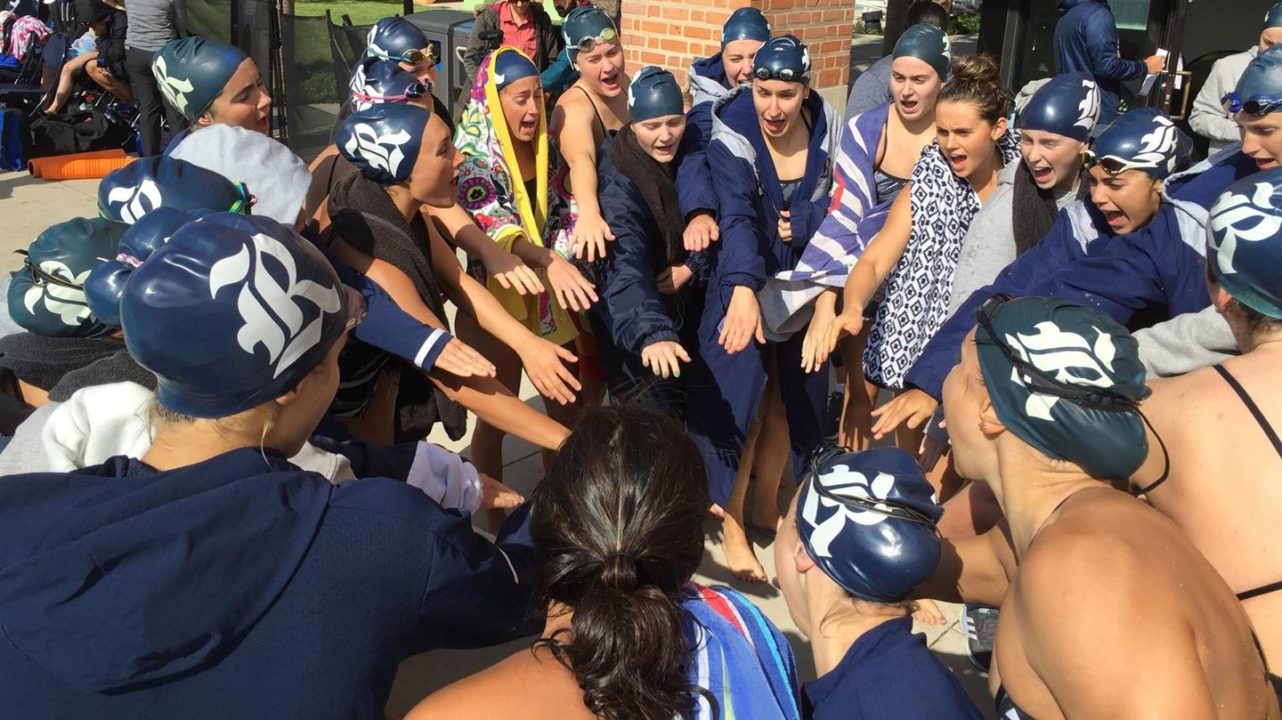 Rice had already built a comfortable 122-point lead through the first nine events of the two-day Invitational on Friday and effectively held the margin over Saturday’s second half of the meet. The Owls registered a final total of 971 points, 118 higher than second place ACC power Georgia Tech (853). Crosstown foe Houston was third (812), followed by the University of the Incarnate Word (446.5) and Air Force (289.5).

Bui won the 100-yard butterfly over a field of 39 entries with a time of 56.29. The junior from Houston returned to win the 100-individual medley over a starting field of 45 with a time of 57.74. The mark was the fastest recorded by an Owl at the Competition Pool, now in its tenth year as Rice’s home swimming venue. Bui also scored for the team swimming the butterfly leg of the 400-medley relay that placed third overall with a time of 3:51.13.

Rice closed out the first half of the two-day session with a strong win in the 200-freestyle relay. The Owl foursome of Kate Nezelek, Sini Koivu, Cano-Minarro and Evans swam a steady 1:34.44 that is also the best mark in Conference USA so far this season.

Evans joined Nezelek, Phillis Range and Bui to open Saturday’s events with a Rice win in the 200-yard medley relay (1:45.92). The sophomore from Pittsford, New York, later gave the Owls a big lift by winning the 50-freestyle over a starting field of 43 entries. Her winning time of 24.18 was a narrow nine one-hundredths of a second faster than second place, but Evans wasn’t quite finished. She returned to anchor the Owls’ 400-free relay that placed second overall with time of 3:30.71.

The Rice swim team is back in action next weekend at the Dual-A-Pool-Ooza. This year’s edition of the annual triple-dual meets against FIU, Denver and Tulane is set for Oct. 18-19 in Miami, Fla.

“It was great to finally get back out there and face some real competition after a long offseason,” head coach Courtney Shealy Hart said. “I thought overall we performed well against some tough competition, but I’m looking forward to seeing how we improve from this meet before we face a really talented Florida State team in two weeks.”

Georgia Tech swim-dive turned in a strong first day at the Rice Fall Splash Invitational and Houston Dive Invitational, claiming three of the top four divers on the 3-meter board, while the swimmers are currently second in points heading into day two.

In swimming, Georgia Tech finished second overall in points after day one with a score of 401. Ilgenfritz helped lead the Jackets, winning the 1000 free with a time of 10:11.05, while junior Catriona MacGregor set a new PR in the 100 IM, finishing second with a time of 58.48.

The Jackets also had a strong showing from their relay teams, with the 400 medley group of senior Caroline Lee, MacGregor, Campbell and freshman Kyrsten Davis placing second with a time of 3:50.96. And the 200 free relay group of junior Grace Mauldin, freshman Imane El Barodi, MacGregor and Davis finished third with a time of 1:37.88.

Both teams return to competition tomorrow, with the swimming events beginning at 10:30 a.m. CT, while divers start at 11 a.m. CT.

*Junior Allie Paschal was the Jackets’ top finisher in the 200 back, finishing fourth with a time of 2:04.96.

At the Houston Diving Invitational, Hidalgo had another good day for the Jackets, finishing second on the platform and earning a score of 231.30. Paige Gohr placed third (215.80), while Carmen Woodruff came in fifth (199.25).

*Sophomore Kelsey Dekshenieks scored a personal-best 168.45 on the platform, which is good for ninth on the Jackets’ all-time list.

*Senior Caroline Lee was the Jackets’ top finisher in the 100 back, placing third with a time of 57.79, while junior Allie Paschal finished just behind her in fourth place (57.85).

HOUSTON – The University of Houston Swimming & Diving program posted a third-place finish at the Rice Fall Invitational and defended its home turf by winning the Houston Diving Invitational.

At Rice, the Cougars walked away with a team score of 812 points, behind first-place Rice and second-place Georgia Tech after taking first-place in five events.

Ioanna Sacha secured a top finish in the 200 Backstroke with a field-leading time of 2:03.11 in the event.

Mykenzie Leehy and Kathryn Power concluded the meet with second-place finishes of their own as Leehy led the Cougars in the 50 Free with a time of 24.27 and Power took silver in the 100 Backstroke after touching the wall at 57.46.

Houston won two of the four relays swam at the meet. Laura Laderoute, Kondis, Katie Higgins and Leehy combined for a time of 3:50.01 in the 400 Medley Relay and a first-place finish. Brown, Leehy, Samantha Medlin and Power clocked a time of 3:30.30 in the 400 Freestyle Relay to take home top honors in the event.

Over at the Houston Diving Invitational, the Cougars tacked on 160.00 points for a first-place team finish.

The Cougars swept the 1-meter, as Jolie Blodgett, Katie Deininger, and Chase Farris took the top-three spots in the event. Blodgett won the 1-meter with a score of 266.05, racking up 48.10 points on her opening dive after successfully performing a Forward 2 ½ Somersault Pike. Deininger scored 264.75 points for second-place, followed by Farris in third-place with 251.30 points.

Deininger and Farris notched top-five finishes in the 3-meter as well as Deininger finished the event with 291.55 points for second-place after collecting 54.60 points on her second dive of the day (Back 2 ½ Somersault Tuck). Farris finished the event in fifth-place with 271.10 points.

In the final diving event of the meet, Farris walked away with a first-place finish after scoring 237.95 points on the Platform. Farris scored a staggering 66.70 points on her final dive of the day after successfully performing a Forward 2 ½ Somersault 1 Twist Pike off the 10-meter platform. Blodgett finished among the top-five in the event with 200.10 points for fourth-place.

UP NEXT
Houston will return to action on Oct. 23 when the squad host SMU for a American Athletic Conference clash.