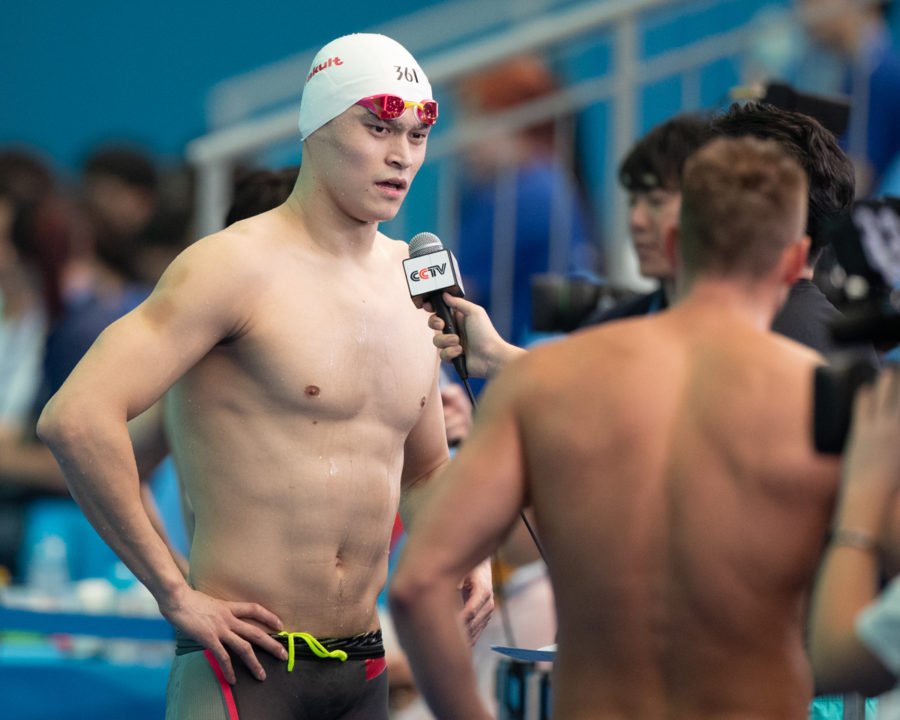 Chinese swimmer Sun Yang's public CAS hearing has been rescheduled after its original September date was postponed due to unexpected circumstances. Archive photo via “Rafael/Domeyko Photography”

In August we reported how the Court of Arbitration for Sport (CAS) hearing in Chinese Olympic gold medalist Sun Yang‘s ongoing anti-doping case had been postponed. Now, the swimming superstar’s lawyer has revealed that the new date for the hearing.

The public hearing, which was originally scheduled for September of this year, was delayed “due to unexpected personal circumstance, one of the parties was obliged to request a postponement of the hearing.” However, the new date is now set for November 15th in Montreux, Switzerland. (Sina)

Sun was cleared by a FINA Anti-Doping Panel after an incident in late 2018 where one of his bodyguards ordered that a vial of his blood be smashed after collection by an anti-doping agent. Sun and his camp have expressed concerns about the qualifications of the anti-doping collection group, and claim that one of the agents was simply a classmate of the doping control officer and was taking secret pictures of Sun on his cellphone during the incident.

The hearing date’s announcement is coming a day after Sun Yang offered up a comment on the news that American Olympic medalist Conor Dwyer had been banned for 20 months due to having tested positive for an anabolic agent in 3 different out-of-competition tests in late 2018.

In a translation of Sun Yang‘s Weibo post, the swimmer stated regarding Dwyer, “Athletes must hold themselves responsible for food and drugs they take, not to defeat their own hard work and sacrifices.”

Among Dwyer’s Olympic medals was a bronze in the 200m free at the 2016 Olympic Games in Rio, a race in which Sun Yang took gold.

“Do not defeat your hard work”

But, but, but… his lawyers says the WADA officer was inexperienced, he did not have the correct documents, his father had not given him permission to go to Sun’s house.

Why did the officer have no papers and qualification? That is highly unusual and fishy.

To be fair, the blood vial itself was already deemed invalid by the lawyer and rules..

Plus it was strange that the WADA officer had bad papers and no legit qualification. Such abnormality should never had been allowed in the first place so there is reason to feel targeted by shady figures.

Maxwel’s Silver Hamer, what a clasic

Seems like he’s implying he doesn’t think it was intentional, just that Dwyer was irresponsible for not investigating enough into the procedure. That’s an awfully polite comment for a guy who has been totally trashed by western media and protested against on the podium.

Unfortunately racism is something still very real, the comment section on any and every news about doping in this website is proof of it.

Being a serial doper has nothing to do with your race. 1st offense lifetime bans are the only deterrent with zero tolerance.

I don’t care if you name is Dwyer, Morozov, Yang, Ben Johnson, Lance Armstrong. If you are caught you should not be allowed to compete again. When it becomes national team systematic sponsored then the federation should be banned.

I’m not sure that I agree with this. There have been cases where innocent athletes have taken supplements that are not on any banned list, only to test positive because the supplements were tainted. Athletes cannot be held responsible for the irresponsible behavior of companies that promote/sell these products. Kicker Vencill is a prime example of an innocent athlete taking a tainted product.

I have no stats to offer, but isn’t the accidentally took tainted supplements like the most obvious and used excuse? I don’t know why we should believe it. Incidentally, I know and like Kicker and I trust that didn’t set out to cheat, but I have little sympathy for the mess he got himself into. He should have known better. Trying to be objective here.

Serial doper would Means more than once. The america had testosterone pellets which are clearly illegal. Yang was only deemed a doper once and it was due to a long term heart palpitation med that was only recently been added to the ban list for just 4 months.and easily detectable in a drug test so he had proof it wasn’t intentional…and afterwards the same drug got downgraded from stimulant status to an arbitrary but complex one a year later. A lot of professional champ swimmers like Alexander Dale Oen, Kenneth To, etc have died from cardiac arrest over the years and possiblely have been banned from the sport if indepth cardiac tests showed their excess vulnerability, hence the difficult emotional… Read more »

It is. See how Dwyer’s teammates congratulated him under his IG post on his retirement and great career. Some of them spoke against Sun Yang just months ago.

Sun Yang is making me not not like him. I can’t believe it.

Innocent until proven guilty except the american was proven guilty. And instead of viciously trashing the american, the chinese bloke still gives him the benefit of the doubt when we don’t know the full story for sure.

Wow. It’s amazing how much Sun could learn from his own advice.

Sun yang doping violation was due to a long time legal med that was suddenly put on the ban list for only 4 months. It was easily detectible and hence he had reasonable proof it wasn’t intentional but did not know of the recent changes. Very different case from dwyer.

It’s actually a fear that many american athletes have and are aware of ~ to be called a drug cheat because you accidentally consumed meat that is laden with testosterone steroids and growth hormones. Or tainted supplements. And nobody will believe you.