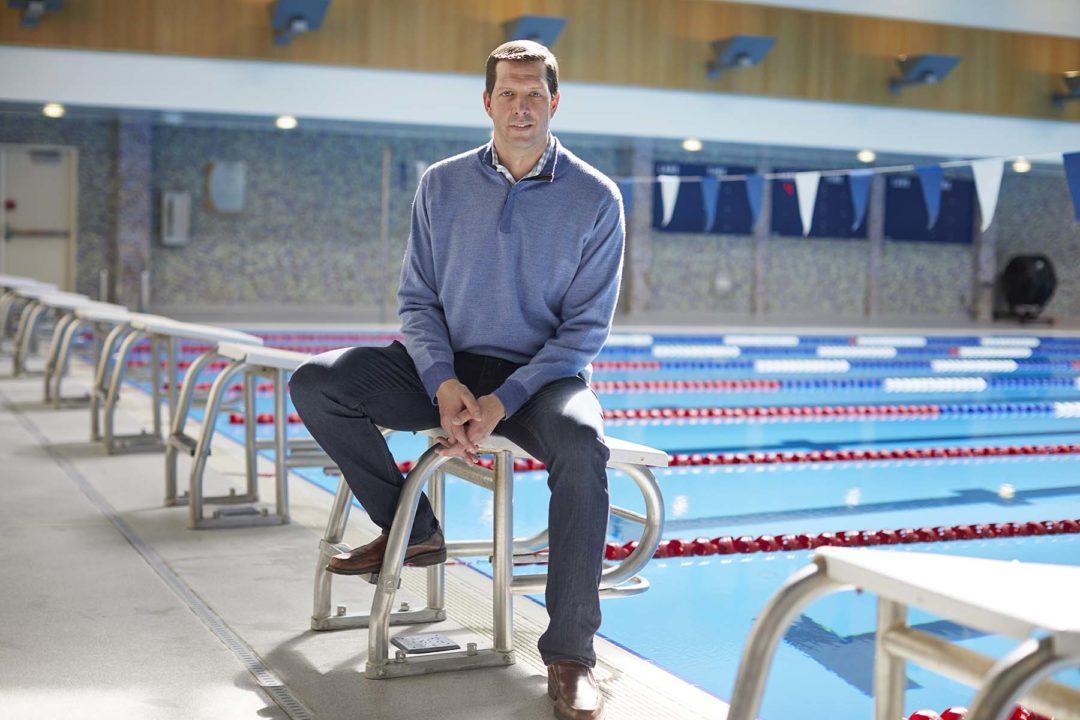 June 17 marked 20 years since Tom Malchow broke the 200 butterfly world record. It was the last time the record was broken prior to the Phelps era. Archive photo via Tom Malchow

June 17, 2020 marks 20 years since American Tom Malchow broke the world record in the 200 fly at the Charlotte UltraSwim with a time of 1:55.18, shaving .04 off of the previous record. That made him the last man to hold that World Record before a young swimmer named Michael Phelps came along and changed the way the world viewed the sport of swimming, and the way the sport of swimming viewed ‘fast.’

When Malchow broke the mark, the old record was held by Russian Denis Pankratov since 1995. Pankratov was the defending Olympic gold medalist from the 1996 Games in Atlanta.

Although Malchow’s exact splits are not available, the newspaper Charlotte Observer reported at the time that he took it out in a 55.53 split for the first 100 meters, swimming well ahead of his competition.

By the 150 mark, it appeared to be a race between Malchow and the world record line. Known for his closing speed, he charged to the wall, eclipsing the mark.

The reporter at the scene noted, “the noise coming from the stands sent an electric jolt through the building. It never stopped, working its way to a deafening climax when Malchow finished. All eyes except Malchow’s looked for the time. He already knew.”

After the race, Malchow spoke to the reporter stating, “I went out fast at the beginning, and I could hear the crowd pushing me during the race. I can’t tell you how much that helped.”

A few months after breaking the world record, Malchow would go on to win the Olympic title over Pankratov, winning in a new Olympic Record time of 1:55.35.

Ironically, in that Olympic race, a 15 year-old Michael Phelps finished back in 5th place, just missing the podium by a few tenths of a second.

Less than a year later, Phelps would begin his tear on the record board by breaking Malchow’s 200 fly record with a time of 1:54.92. He cemented this with another world record at the World Championships later that year before going on to break it another 6 times.

At both those World Championships and 2002 Pan Pacs, Phelps and Malchow proved to be fierce competitors. Although Phelps broke the world record at worlds, Malchow beat him out for the gold medal a year later, handing him his only loss in the event until 2012.

Malchow’s record remains one of the last signs of the time before the Michael Phelps era. Since his 1:55.18, the record has been brought down to 1:50.73 by Hungarian Kristóf Milák.

Unfortunately, there is no video of Malchow’s 200 fly world record. However, there is footage of the 2000 Olympic Games race and the 2001 World Championships showdown between Phelps and Malchow:

Malchow’s recovery always looked painful and counter-intuitive. But it worked

How about Phelps’ breaking protocol to walk over and wish Tom luck as they were doing intro’s? Tom looked like wth are you doing?

Looking at that world record progression —- has any swimmer other than Phelps lowered a WR in an event for 8 consecutive years?

Thinking…off the top of my head…I cannot think of anyone, no.

Ledecky would need to break either the 1500 or 800 wr for it to happen again.

Salnikov broke the 800 free wr 4 times over a 7 year period.

One of may favorite swimmers ever. I remember watching him swim and competing against him in high school (we were in the same conference), it was amazing.

He then trained at Hamline University where I used to train for diving. He would be the only swimmer in the lanes under the board we were diving on. We were all mortified that we would hit him and ruin his career. Good thing we didn’t.

This reminds me how the Charlotte ultraswim was a really fun meet to watch back in the day. I feel like that and the Santa Clara Meet were always fun previews of the biggest meets of the summer up until a few years ago. Those were the first “big meets” I swam in high school before their Prestige kinda took a hit. With the pro swim series changes it’s kinda changed. Not worse or better just different.

Tom Malchow was my swimming idol growing up. Cursed with the ability to swim the 200 fly much better than any other event, I appreciated how he leaned into it and became the best 200 flier in the world. If not for Malchow, I might have kept trying to work on “easier” events at which I would only ever be average.

Tom Malchow…. much love to you and your family….you are a gentleman and scholar….however, I am still bitter that you beat me at ’96 OTs.

This is the best comment I’ve read on here

…should’ve added… “Tom, come on the SwimSwam Podcast and help me work through my 24-years of unprocessed trauma from your crushing defeat of my ego…. It’s the least you could do after kicking my butt.” (Side note, true story…I called Malchow after Kristof’s 1:50 200m fly to tell Malchow he is apparently really, really, really slow. Malchow said, “hey man, you’re slow too.”)

No… that’s bitter pill of life. You never recover.

In the spirit of Darryl Dawkins, your screen name should be “Malchow A’Flyin’, Mel A’Cryin’ Stewart.”