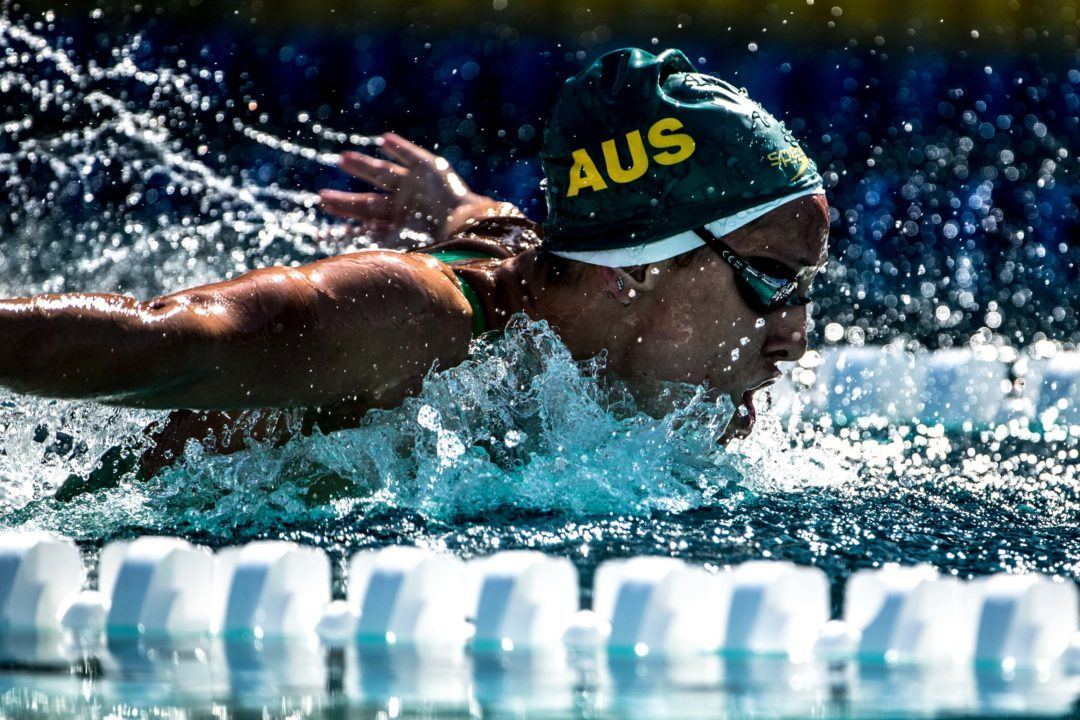 As reported back in May of this year, 3 Australian Olympians were named as having missed 3 drug tests over a 12-month... Current photo via Mike Lewis/Ola Vista Photography

We’ve since reported how Fraser-Holmes was handed a 12-month ban by swimming governing body, FINA, and was also cut-off both financially and training-wise from the Australian National Team. The swimmer is in the process of appealing his ban.

Shortly after, Poort also accepted a 12-month anti-doping suspension for his whereabouts violations. The sanction was imposed on Poort by Swimming Australia following a recommendation by the Australian Sport Anti-Doping Authority (ASADA) CEO under the terms of the National Anti-Doping scheme. Poort’s suspension began on September 5th of this year and will conclude on September 5th in 2018, thereby taking the athlete out of contention for 2018 Commonwealth Games participation.

Just today, the remaining case of Groves has been cleared, with the swimmer now able to compete at next year’s Commonwealth Games hosted by her home nation. Per The Brisbane Times, ‘Groves and lawyer Tim Fuller successfully pleaded their case to FINA overnight on Thursday.’ They described how Groves was in her dorm room and was waiting at the correct place and time, but ‘testers failed to go past the front desk of the San Diego University dorm building to find her.’ The testers also failed to call the athlete. (Brisbane Times)

As such, FINA officials ruled the 3rd test failed to meet WADA protocol, indicating that the testing agents ‘did not do everything in their power to track down the athlete.’

I thought she would get off.
Now for TFH to get his ban dismissed.

Why? He missed 3 times and had piss poor excuses, Maddie had a valid reason

@UBERFAN TFH is probably ignored the importance of it….. but he aint no drug cheat.
End of story.

He missed 3 tests; he admitted his own negligence in doing so. He may not be a drug cheat but given his admission, there are no legal grounds for dismissing his case unless they can prove procedural error on the part of the testers …. and that will mean producing new evidence that was not presented at the original hearing.

Groves …. has probably been rather lucky getting away with the Armistead Defence with this one but good luck to her. One does still wonder how and why she missed the other 2 tests ….. and why she was still listing Michael Bohl as her coaching contact when she was training over in the US ?

the fact that three athletes had missed so many tests should be a concern for swimming australia. knew maddie would get off though. call the athlete not the coach.

You cannot legislate against stupidity nor can you prevent people being careless or believing they’re bullet-proof so there is only so much that SA (inept as it often proves to be) can do if swimmers continue to “tune out” or retain a “whatever !” mentality. Maybe 2/3 of their colleagues “going down” and another dodging the bullet MIGHT hit home …. but for how long ?

My point re Bohl is that she is obligated to keep her relative details updated and if she was still listing her AUS coach as liason point whilst training elsewhere …. it does at minimum hint that she was less than compliant with her obligations. Fair enough that she’s been able to mount a… Read more »

Agreed, why miss two tests, I think the listing of Bohl was a mistake, although did she have an official coach while in the USA then Europe?

It’s also “end of story” that there are rules for a reason, and not being bothered to take them seriously is not a valid defence when you fall shy of them. Maddie Groves’ case seems very different from TFH and they’ll be judged accordingly.

Sounds like a sensible decision. Every case has to be judged on its merits.