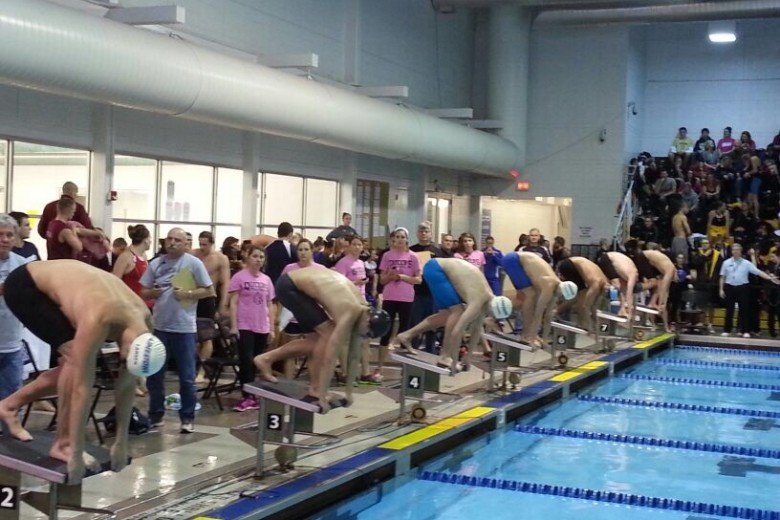 Mother Nature may have had a hand in the outcome of Day One of the Bluegrass Mountain Conference Championship, as weather-related rescheduling meant compressing a four-day meet into three days, the first of which consisted of timed finals.

In the new formation, the meet began in the afternoon with the 1000. Some schools ended up not participating because they had been traveling all morning, but those that did saw some great swims. Queens’ Meredith Boudreaux broke the meet record by 4.3 seconds and lowered her own school record by 2, touching in 10:07.70. Teammates Lauren Frizzell and Nikki Johnston made it a 1-2-3 sweep; the three Royals dropped a combined 51 seconds in the event. Defending champion Alex Menke of Queens won the men’s race in 9:11.50. Andrew Greenhalgh of Johns Hopkins and Makis Jorgensen of Wingate rounded off the podium.

The evening session kicked off with the quartet from Queens (Caroline Arakelian, Alexandra Marshall, Lillian Gordy, and Lauren Mock) breaking the meet record and their school record with a 1:32.90 in the 200 free relay. The Royals quartet is now just .91 off the NCAA DII mark. Johns Hopkins finished just .32 behind, and .26 ahead of Wingate. The Queens men won their event in 1:20.72 with Nic Eriksson, Harry Traystman, Austin Sumrall, and Hayden Kosater. Limestone finished second, half a second ahead of Wingate.

Defending champion Gordy of Queens took the 500 free in 4:56.62, just .01 off her winning time from 2013. Rachel Hickey of Limestone finished second, while Queens’ Frizzell was third. The Wingate men put two on the podium when Marko Blazevski won the 500 in 4:28.27 –nearly a second faster than his 2013 winning time– and his teammate Leif-Henning Kluever took third. Menke of Queens was second.

Arakelian of Queens broke the meet record but just missed besting her own school record with a 2:01.61 victory in the 200 IM. Wingate’s Sofia Petrenko dropped nearly 5 to finish second and Taylor Kitayama of Johns Hopkins took third. Queens freshman Matt Josa won the men’s race in 1:47.14. Wingate took the next two spots with Tim Kniffler and David Collum.

Johns Hopkins’ sprinter Anastasia Bogdanovski broke the meet record in the 50 free with 23.24. Emily Reh touched second with a drop of .68 from her seed time, while Hopkins nabbed third and fourth with Sarah Rinsma and Kylie Ternes. Sean Gunn of Limestone held off the rest of the field to win the men’s 50 in 20.32. Not far behind were Issam Zeraidi of Wingate and Eriksson of Queens.

The session concluded with two new meet records from the Queens’ women’s and men’s 400 medley relay teams. The women reset the meet standard with a 3:45.78 swim from Hannah Peiffer, Arakelian, Mock, and Kristin Diemer. Johns Hopkins and Wingate touched nearly in unison, with the Blue Jays getting the edge for second. While the Queens women also broke their school record, the men missed the Queens school mark by .16. Still, Traystman, Eriksson, Josa, and Kosater combined for a winning 3:13.66, solidly ahead of Wingate and Limestone. The Royals are now within 1.6 of the NCAA DII men’s record.

We promised you a close BMC Championship, but we didn’t expect it to be quite so bunched up. Nor did we expect Queens to be this far ahead. Here are the scores after Day One: