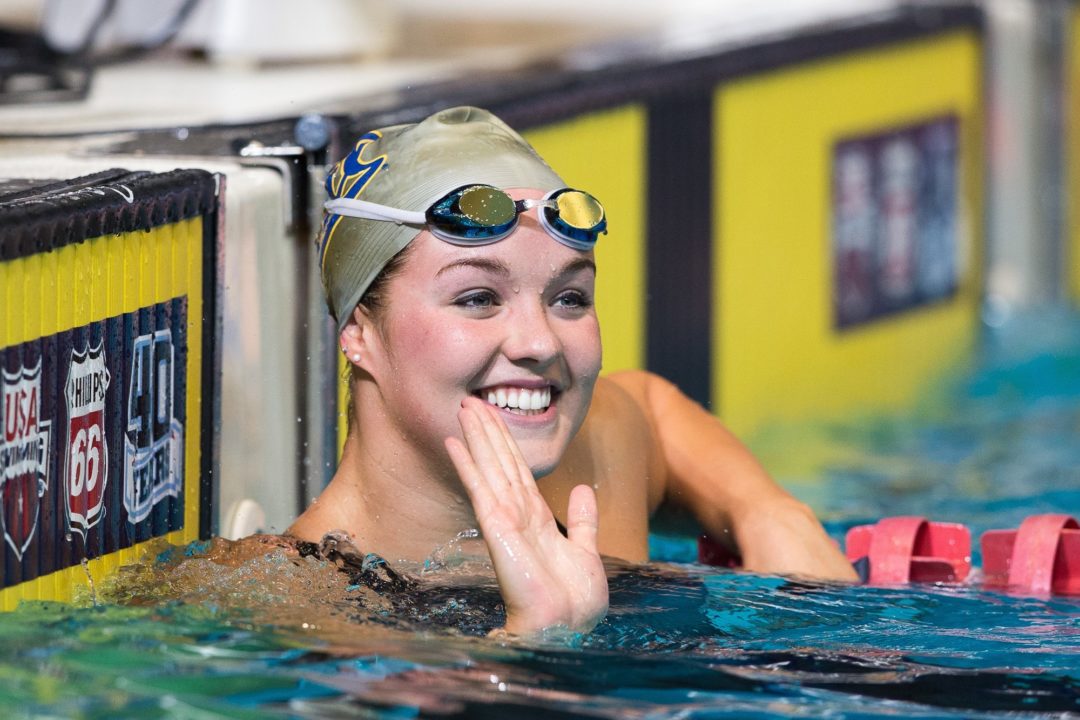 On night three of the 2013 World Championship Trials, Rachel Bootsma won the 50 backstroke in record time. The 19 year-old from California Aquatics took advantage of a great start and touched the wall first with a time of 27.68. Bootsma missed the records this morning during prelims by a small margin of .02. The previous record, set by Hayley McGregory of Longhorn Aquatics in 2008, was 27.80. McGregory was a very talented swimmer. In some circles, she is considered the best swimmer to never qualify for the Olympics.

At the 2012 Olympic Trials, Bootsma earned a spot on the Olympic team in the 1oo meter backstroke after finishing second to Missy Franklin. Tonight, she came out on top, touching out Franklin by .30. Bootsma is coming off a very successful college season, under the direction of  Cal Berkeley Head Coach, Teri McKeever. She was the 2013 NCAA champion in the 100 yard backstroke.

Bootsma’s swim tonight does not guarantee her a spot on the World Championship Team heading to Barcelona in July. However, with several doubles on the women’s side already, she’s just about sealed it, and on Friday that should become official with serious doubling opportunities in every women’s event.

Note that she, Missy Franklin, and Liz Pelton are not only World Championship teammates, they will also be teammates at Cal next year. Bootsma (a great short course swimmer) showed that she’s still able to hold onto spots in the medley relay among an incredible group (though, McKeever will probably decide that Cal’s relays are better with Bootsma on the fly leg).

Tony Carroll is a swimmer at IUPUI and a SwimSwam contributor.

That’s correct. Now the Women’s 100m back is of especial interest in order to see if that sort of modification of the US medley relay becomes likely. I have estimated Australians to be a slight favourite mainly because of their relative dominance in a freestyle leg. Having the fastest anchor is important in relays owing to a special predator-prey relationship. If USA can unleash Missy anchoring their medley relay, it may change it all. Namely, Missy showed the potential of going 53 flat or even under. She is still the prey but probably such that is too fast for the predator.

Incoming frosh Farida Osman might be Cal’s first option for the fly leg on their 200 medley relay, with Bootsma 1st choice for the back leg. Osman recently swam 26.15 at the Mediterranean Games, which would have placed 2nd in the US World Trials and ahead of both fellow Bears Cindy Tran and Rachel Bootsma. The Bears still need to find a replacement for Leverenz for the breast leg on their medley relays.

Teri needs to get the NCAA to replace medley relays with a backstroke relay (Missy, Bootsma, Tran, Pelton) and a butterfly relay (Osman, Bootsma, Tran, Li/Batchelor) in 2014.

If Bootsma is taken on the medley relay , The Usa can put Missy on Free , Vollmer on Fly and
and Larson on Breast …powerfull new medely in born .